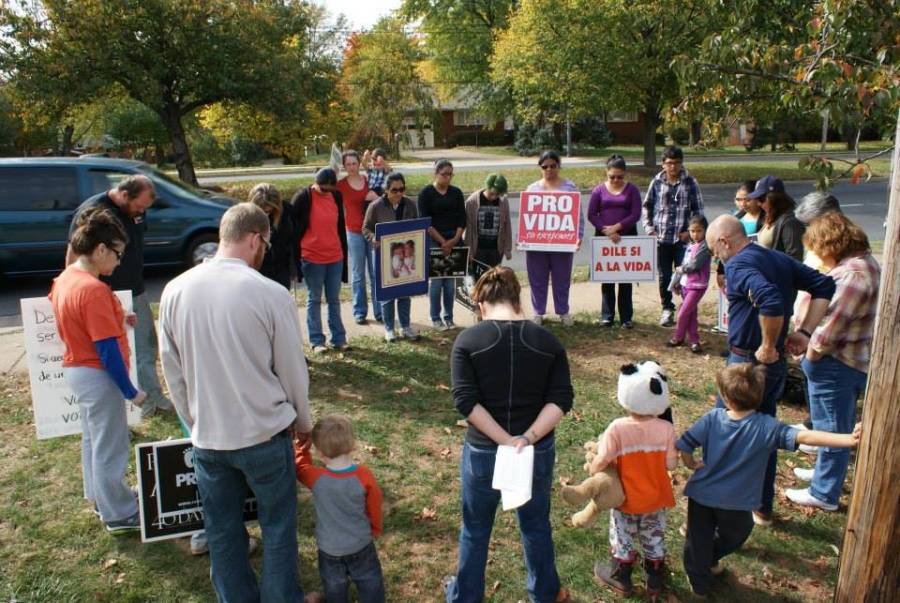 Discipleship Ministry CCMV - a bilingual group of pro-life supporters - prays at the Amethyst Health Center for Women abortion clinic in 2014.

Was there a different course the Church in America could have taken to avoid the culture wars? A way to focus on the gospel and transcend controversial moral and political issues? Personally, I would much rather write about Torah than about Trump, about Christ than about culture, about the Holy Spirit than about homosexuality.

Is it possible that, as followers of Jesus, we could have bypassed today’s divisive social issues and simply concentrated on the gospel? Or is this making a false dichotomy between gospel and culture?

But does that mean that we cannot be good witnesses while standing for justice and righteousness and equity?

Certainly, we must transcend partisan politics.

We cannot be pawns of a program or a party. We are God’s servants, with ultimate allegiance to Him, and all other allegiances must be secondary to that.

But does that mean that we remain silent when lives are being destroyed? That we simply pray when injustice takes place in front of our eyes? That we take no concrete steps to stop the concerted ideological attack against the younger generation?

To be totally candid, I have no problem dealing with controversy. I’m the son of a New York City, Jewish lawyer, and debating is in my blood. And as a Jewish follower of Jesus, I’ve known controversy since the first days of coming to faith in late 1971.

At the same time, I see no way that we, as disciples of Jesus, could have avoided — or should avoid — the culture wars.

After all, the culture wars include the slaughter of the unborn, better known as abortion.

Can anyone really give me Scripture that calls us not to get involved in the saving of innocent lives?

Can anyone give me verses from the New Testament that negate these from Proverbs? “Rescue those who are being taken away to death; hold back those who are stumbling to the slaughter. If you say, ‘Behold, we did not know this,’ does not he who weighs the heart perceive it? Does not he who keeps watch over your soul know it, and will he not repay man according to his work?’” (Proverbs 24:11–12)

I’ve asked this question countless times, but it bears repeating: How do we look at Christians in pre-Civil War America who did nothing to oppose the institution of slavery? Worse still, how we do view those who participated in slavery, even if it was something they grew up and that was normal to them? And what about those who supported segregation as Christian leaders?

Do we say, “Well, as long as they preached Jesus, that’s what matters. No reason for them to get hands their soiled with the culture wars?”

I Could Do No Other

Again, to be totally candid, doing research for my first book on LGBT issues, A Queer Thing Happened to America, was difficult and painful. Much of the reading was dark, and it was a completely different world for me, especially when compared to writing a commentary on a book of the Bible or writing an inspirational book on revival.

But I could do no other.

Fifteen years ago, it was already clear to me that LGBT activism was the principle threat to our freedoms of conscience, speech, and religion.

Fifteen years ago, when I was first called to address these issues, it was already clear that an aggressive gay curriculum was flooding our schools.

Do we sit back idly when marriage is redefined? When male-female distinctives are being attacked? When our kids and grandkids come home from school in tears over the latest assault on their faith?

I hope all of us would agree that, if we were aware children were being sex-trafficked in our neighborhood, we would work together to combat it.

When the early Christians rescued abandon babies, they had to defy the authorities. But they did it because it was right, and as followers of Jesus, we are called to do what is right. And doing what is right means opposing what is wrong.

When it comes to our political involvement, I don’t plan to endorse a candidate again, having done so only once. And it’s not because of second thoughts on that candidate, Senator Ted Cruz. I’d love to see him as our president one day.

But for me, as a leader in the Body, my greatest calling is to be a voice. And the moment I endorsed Senator Cruz, people heard my voice in that context. Everything was now filtered.

Let Us Be Jesus to the Culture

Does that mean that I keep my voting habits private? One of my colleagues, born in Europe, believes that’s the wisest course of action. And I respect his views.

But our political leaders are supposed to carry out the will of the voters, which means that there is constant intersection between the culture, politics, and the gospel. And they often comment on the culture, which calls for our engagement.

Again, we must transcend partisan politics, and our focus must be on issues more than personalities and on the gospel more than culture.

But we deceive ourselves if we think that, in a country like America, we can just “stick to the gospel” without confronting the culture. Following Jesus closely will inevitably result in colliding with controversy.

Let us do our best, then, to do so with the love of God, with the truth of the gospel, and with the fullness of the Spirit.

In short, let us be Jesus to our society. We can’t go wrong with that.