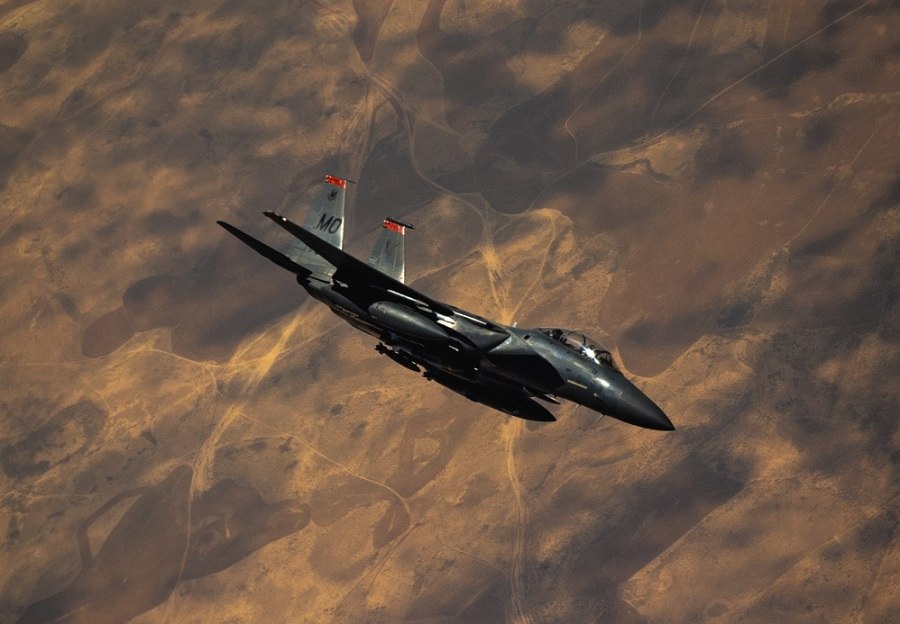 A U.S. Air Force F-15E Strike Eagle banks left after receiving fuel over an undisclosed location in the Middle East on April 2, 2021.

The war against ISIS in the Middle East is showing no signs of slowing down.

Just like in March, when more airstrikes in Iraq were carried out in one month than in all of 2020, U.S. and coalition war planes are pounding what’s left of the world’s most vicious terrorist group.

On Thursday, the U.S. military also offered a reward of up to $10 million for information leading to the arrest of ISIS leader Amir Muhammad Sa’id Abdal-Rahman al-Mawla, also known as Hajji Abdallah. That’s double the reward that was being offered last year.

To bring al-Mawla aka ‘Hajji Abdallah’, ISIS/Daesh leader, to justice, the U.S. Gov is offering a reward up to $10 Million to individuals who furnish info leading to his arrest, so that we can ease the victims’ suffering & serve the cause of justice. Help us #DefeatDaesh.

According to the U.S. government, al-Mawla became the leader of ISIS after the American military killed the terrorist group’s previous commander, Abu Bkar al-Baghdadi, in 2019. “Al-Mawla helped drive and justify the abduction, slaughter, and trafficking of members of Yazidi religious minority groups in northwest Iraq,” according to U.S. Central Command.

We will be praying for the capture of this terrorist and the safety of all U.S. and coalition troops pursuing him. America’s war on terrorism is not over.

In Afghanistan, CNN is reporting that the Taliban twice targeted a top secret American base there late last month.

According to the report, Taliban fighters injured seven civilians outside Forward Operating Base (FOB) Chapman when rockets were launched at the base, where U.S. service members and CIA operatives are serving. “During a second attack, a water tower was hit and a few rounds landed on the base, though no U.S. personnel were killed or injured,” the network added.

FOB Chapman was the site of one of the worst attacks in CIA history when an al Qaeda sleeper agent murdered seven Americans on December 30, 2009. One of the contractors killed was former U.S. Navy SEAL Jeremy Wise, the oldest brother of my friend and co-author, U.S. Marine veteran Beau Wise. You can read more about the FOB Chapman attack in our recently released book, Three Wise Men.

CNN notes that the latest Taliban violence, including a separate attack this week in Kandahar, will likely complicate the Biden administration’s decision on whether to adhere to a previously negotiated May 1 deadline to pull all U.S. forces from Afghanistan. American troops have been at war in Afghanistan since 2001.

Please pray for all U.S. service members in harm’s way and their families here at home.

Two U.S. Navy sailors were shot and wounded on Tuesday near Fort Detrick in Frederick, Maryland.

One sailor – Hospitalman Casey Nutt – has been released from the hospital. A second victim – Hospital Corpsman 1st Class Carlos Portugal – was still listed in critical condition as of Wednesday, according to WJZ-TV.

The Baltimore television station reports the suspected shooter has been identified by authorities as Fantahun Girma Woldesenbet, who was a U.S. Navy hospital corpsman working at the Naval Medical Research Center.

Woldesenbet reportedly went to a military office in Frederick armed with a rifle and shot the two sailors before going to nearby Fort Detrick, where he was shot and killed near a security gate. No motive has been revealed by police or military officials.

FREDERICK SHOOTER: Fort Detrick is a U.S. Army Medical Command installation with about 10,000 military, federal, and contractor employees assigned there. According to Fort Detrick's website, each branch of the military is represented. https://t.co/w8LmSltBVG pic.twitter.com/S9JwBzaULM

Fort Detrick, which hosts the U.S. government’s biological defense program, is one of the military’s most important installations. Our prayers are with the sailors who were shot and wounded, as well as their families.

“The Fort Detrick community is here to offer support as our brave sailors heal from this tragic incident,” Brig. Gen. Michael Talley said.

A group of brave National Guard soldiers recently returned to their home state of Michigan after spending the last year at war in the Middle East. 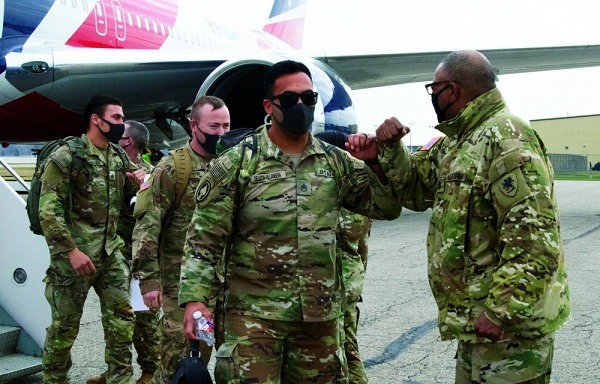 Michigan National Guard Soldiers return from a yearlong deployment to the Middle East on March 27, 2021, in Lansing, Michigan.

Welcome home, warriors! From the bottom of our hearts, we thank you and your families for the enormous sacrifices you’ve made for our freedom.