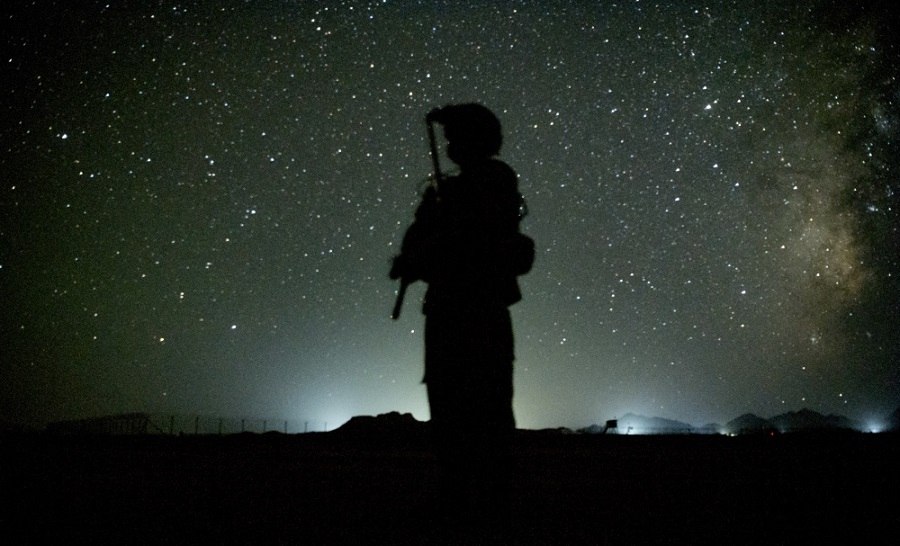 A U.S. Air Force airman guards a C-130J Super Hercules at an undisclosed location in Afghanistan on August 3, 2019.

The Taliban has claimed responsibility for a horrific terrorist attack on Wednesday in the war-torn heart of Afghanistan’s capital city. Fourteen people were killed and 145 wounded when a suicide car bomber blew himself up near a Kabul police station, according to Fox News.

The cowardly attack was immediately condemned by U.S. Special Representative Zalmay Khalilzad, who is currently trying to negotiate an end to America’s longest war.

Indiscriminate attacks and intentional Injury to civilians are never warranted. We condemn the attack today in Kabul for which the Taliban claimed responsibility, and in which scores were killed and reportedly more than 145 injured, including many civilians.

The violence comes as one of two American soldiers recently killed in action in Afghanistan is laid to rest. Funeral services for U.S. Army Pfc. Brandon Kreischer, 20, will begin today in Bryan, Ohio, according to his obituary. The fallen hero leaves behind a pregnant wife and unborn son.

A memorial fund for Grace and Callum Kreischer has established at F & M Bank. The mailing address can be found here. The Stream asks that you pray for the Kreischer family, as well as the loved ones of the second soldier killed in Afghanistan in the July 29 attack, U.S. Army Spc. Michael Nance.

Thousands of brave American troops are still risking their lives in Afghanistan and other perilous places around the world. Please continue to pray for these warriors and their families.

From Afghanistan to Texas and Ohio, last week’s mass shootings in El Paso and Dayton have impacted the lives of thousands of U.S. service members, veterans and military families. As millions of Americans pray for the victims, they have also been inspired by the story of a courageous American soldier who helped save the lives of several innocent children.

U.S. Army Pfc. Glendon Oakley, who is stationed at Fort Bliss, happened to be shopping at a sporting goods store in El Paso when a child ran inside saying there was a shooting at Walmart. The soldier, who had recently returned from a deployment to Kuwait, then pulled out his weapon and ran inside the Cielo Vista Mall, which was still echoing with the sounds of gunshots.

“I didn’t even think,” Pfc. Oakley said, as reported by KFOX-TV in El Paso. “I just grabbed as many kids as I could and ran five stores down to the exit.”

The below video shows the devastating impact the day’s tragic events are having on the 22-year-old soldier, who is mourning the many lives lost.

Pfc. Glendon Oakley, a soldier stationed at Fort Bliss, helped children to safety inside Cielo Vista Mall after a gunman opened fire at the nearby Walmart.
Read more: https://t.co/qqbH92fTBC pic.twitter.com/sPV4zaGN0i

“I’m looked at as a hero for it, but that wasn’t the reason for me…,” Oakley said before being overcome with emotion. “I’m just focused on the kids that I could not get and the families that were lost because it hurts me like I lost — like they were part of me.”

On Thursday, Pfc. Oakley was personally thanked by his commander-in-chief and the First Lady.

President Trump meets with Pfc. Oakley, one of the heroes of the #ElPasoShooting #ElPasoStrong pic.twitter.com/r2RIcNyb7a

U.S. Army Pfc. Glendon Oakley embodies the very best our military — and our country — has to offer. He is a selfless, compassionate hero who deserves the gratitude of every single American as we also honor, mourn and pray for the victims and their families.

A group of U.S. Marines who had been deployed with the 22nd Marine Expeditionary Unit recently reunited with their families in Cherry Point, North Carolina.