This Week at War: Defending America

From fighting the war on coronavirus to battling terrorism, the brave men and women of the U.S. Armed Forces are risking their lives to keep us safe. 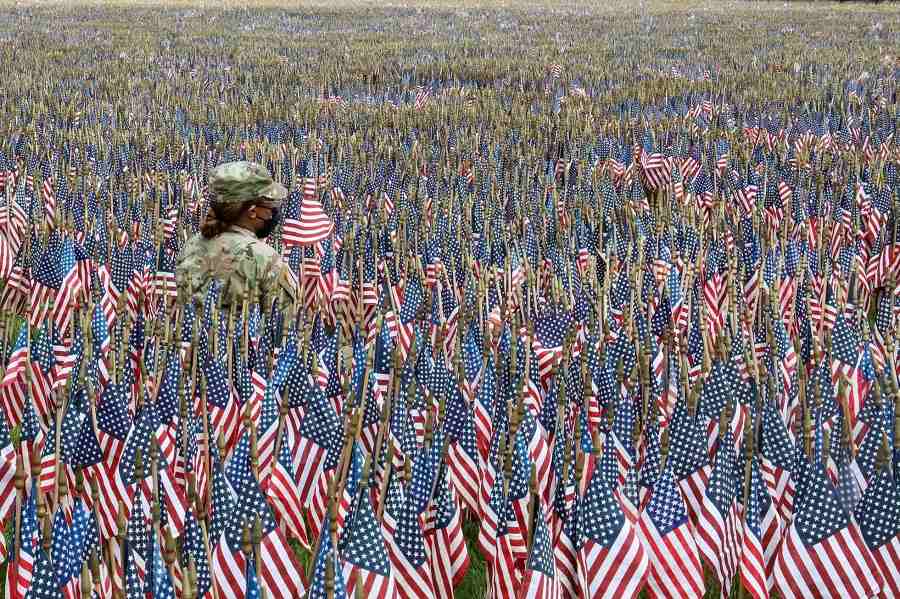 A U.S. Army soldier stands among American flags that decorated graves at Arlington National Cemetery on Memorial Day 2020. The flags were drying at Joint Base Myer-Henderson Hall in Arlington, Virginia, before being stored.

If there was any remaining doubt that our military is fighting a war on COVID-19, please allow me to share the story of U.S. Army Reserve Sgt. Simon Zamudio.

“Zamudio, who was married and recently had become a father, had served as a unit supply specialist during his five years in the Army, according to Army officials and his obituary,” Stars and Stripes reported on Wednesday. “His death marked the third among U.S. troops since the beginning of the coronavirus pandemic and the first since a Navy sailor died April 13.”

Army Sgt. Simon Zamudio, who was married and recently had become a father, had served as a unit supply specialist during his five years in the Army, according to Army officials and his obituary. https://t.co/dqDzkB7Bvz

The fallen soldier’s aforementioned obituary is difficult to read.

“Sgt. Simon Zamudio age 34, proud U.S. Army Reserve Soldier from Carpentersville, Illinois passed away May 22, 2020 at St. Alexius Medical Center in Hoffman Estates,” the tribute begins before going on to mention his wife, Carina Zamudio-Ramos, and their newborn daughter, Xoe.

“He was so healthy,” the soldier’s sister, Alicia Zamudio, told ABC 7 Chicago. “He was being deployed next month. So, we know he was doing, health-wise, he was good.”

In a heartbreaking turn of events, ABC 7 Chicago and The Washington Post reported that the soldier’s mother, Gloria Cervantes-Zamudio, died of coronavirus complications on Memorial Day, just three days after her son. Words cannot express the sorrow we feel for the entire Zamudio family at this unimaginably difficult hour.

A visitation was held for the departed soldier on Wednesday night in Illinois, with a private burial to follow. Please pray for the loved ones of this fallen hero and his mom, as well as the tens of thousands of U.S. troops and military families who are risking their lives every day during this deadly pandemic. The war being fought against COVID-19 by these selfless patriots is not yet over.

President Trump said this week that “it is time” for all American troops to leave Afghanistan, where the brave men and women of the U.S. military have been fighting for nearly 19 years. The commander-in-chief reinforced his desire to end America’s longest war with a Wednesday morning tweet.

We are acting as a police force, not the fighting force that we are, in Afghanistan. After 19 years, it is time for them to police their own Country. Bring our soldiers back home but closely watch what is going on and strike with a thunder like never before, if necessary!

There are currently “between 8,600 and 10,000” troops in Afghanistan, according to the ABC News, with the former troop strength number also being the target for mid-July in adherence to an agreement the Trump administration made with the Taliban. The Washington Post reported that the President of the United States wants all U.S. forces home from Afghanistan by Election Day, which the Pentagon is drawing up plans to facilitate.

Please join The Stream in praying for each and every American service member still fighting terrorism in Afghanistan and other dangerous places around the world. Until every single soldier, sailor, airman and Marine is back home, our military is still at war.

A group of U.S. Navy pilots and sailors is back home after an eight-month overseas deployment. 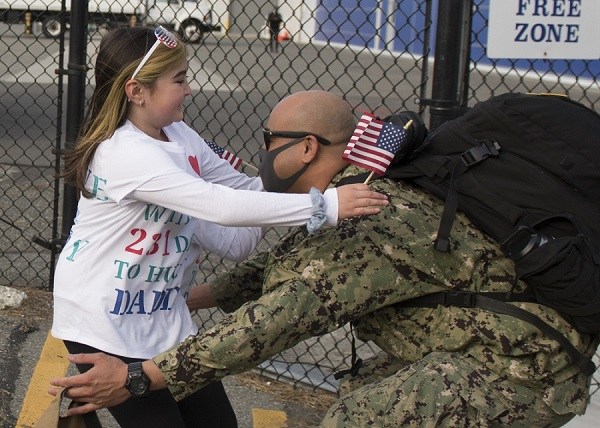 A U.S. Navy sailor embraces his daughter during his squadron’s homecoming celebration in Oak Harbor, Washington, on May 24, 2020.

Welcome home, heroes! Thank you for your dedicated service to our country.