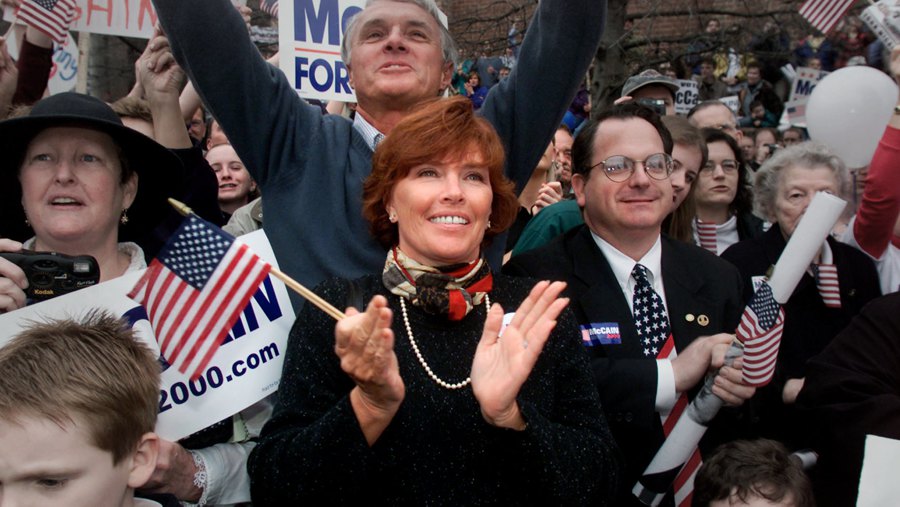 Kathleen Willey is seen in a February 27, 2000 file photo during a McCain 2000 rally in Alexandria, Virginia. A federal judge ruled today that President Clinton 'committed a criminal violation of the Privacy Act' when releasing letters to cast doubt on the reliability of Willey. Willey accused President Clinton of making sexual advances towards her in the White House.

By Rachel Alexander Published on February 8, 2016 •

Kathleen Willey, who told 60 Minutes she was sexually harassed by Bill Clinton, is taking a position as spokeswoman for a PAC opposing Hillary Clinton. Willey said she was groped by Bill Clinton in the Oval Office in 1993 when she came to him tearfully asking for a job. In a 1998 deposition, he denied the charge. The PAC will be called the Rape Accountability Project for Education PAC, or RAPE PAC.

Metro notes that “Donald Trump, angered at Hillary Clinton calling him sexist, described Bill Clinton as ‘one of the great women abusers of all time’ and Hillary Clinton his ‘enabler’ at a campaign event last month.” Willey reportedly will give public remarks and appear in political advertisements aimed at shining a light on Bill Clinton’s alleged sexual misconduct. Roger Stone, a Republican strategist formerly aligned with GOP front-runner Donald Trump, said the ads will run daily on radio, TV and billboards.

Willey told Reuters, “This gives me more of an opportunity to get the message out to young voters who weren’t even born or don’t even remember what happened to the women who have suffered.”

Willey is the author of Target: Caught in the Crosshairs of Bill and Hillary Clinton. In it, she says her house was burglarized and the only thing stolen was the manuscript of the book. She said she believes someone connected to the Clintons was responsible. In 1993 her second husband, Edward E. Willey Jr., was found shot dead from a gunshot wound, killed the same day that she asked Clinton for a job. It was ruled a suicide, but in her book (pp. 67-70) she toys with the idea of the Clintons being behind it, noting a few things that didn’t appear to add up from the autopsy report and underscoring the case’s similarities to the strange death that year of their friend Vince Foster, who served as a Deputy White House Council during the first few months of the Clinton administration. Edward Willey, however, reportedly owed several large debts at the time of his death and left behind multiple notes to loved ones. Willey said that a person might do or write anything if threatened at gunpoint.

As for Bill Clinton’s alleged and confessed sexual indiscretions, drawing attention to them may already be negatively impacting Bill and Hillary’s favorability ratings. The New York Times polled voters on his favorability rating last month, with mixed results. Only 39 percent rated him favorably, compared to 29 percent who rated him unfavorably. Last year, his favorability rating was significantly higher, 50 percent. And Hillary Clinton recently has lost some support from women. millennial women support Sanders over Clinton by a wide margin. In Iowa, women 29 and under voted for Sanders over Clinton 6 to 1, as much as young men did. The latest national poll, from Quinnipiac, has Clinton statistically tied with Bernie Sanders. It would be ironic if one of the formerly most powerful men in the world contributes to defeating his wife’s campaign for president.