Vice President Harris Boldly Declares She is a Woman 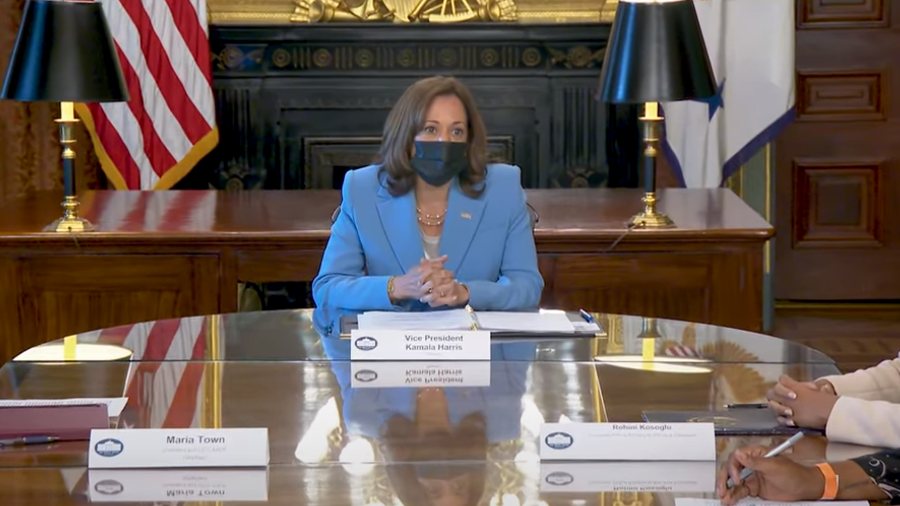 Speaking to a group of disability advocates, and wanting to be thoughtful of those who were blind or vision impaired, Vice President Kamala Harris began her talk by saying, “I am Kamala Harris, my pronouns are she and her, I am a woman sitting at the table, wearing a blue suit.” But what, exactly, did she mean by those words? What, after all, is a woman? And what do we learn about Harris from her preferred gender pronouns?

In raising these questions, my purpose is not to mock the Vice President. Rather, it is to mock the cultural madness that set the stage for her comments. We must not become accustomed to this social insanity!

To be sure, others found VP Harris’s comments to be quite condescending, including Mary Chastain, who describes herself as nearly vision impaired.

Writing on the Legal Insurrection website, Chastain stated that “my main problem with Harris is her introduction of herself to the table of blind and visually impaired people. It’s patronizing and dumb. We’re not stupid.”

Indeed, unless you were living under a rock, you would know that the Vice President is a woman regardless of whether you were seeing or blind.

But the title of Chastain’s short post also recognized the irony of the moment: “Kamala Harris is a Biologist: ‘I am a Woman.’” Exactly!

"I am Kamala Harris, my pronouns are she and her. I am a woman sitting at the table wearing a blue suit."

Vice Pres. Harris provides description of herself for the visually-impaired during a meeting with disability rights leaders. https://t.co/7tBXvijJVd pic.twitter.com/Z5Elf4tL2h

Chastain was referring to Justice Ketanji Jackson’s deflection when Sen. Marsha Blackburn asked during her confirmation hearings, “Can you provide a definition for the word ‘woman’?”.

Justice Jackson said that she could not, explaining, “Not in this context, I’m not a biologist.”

Vice President Harris, then, must be a biologist herself, since she had no problem stating that she was, in fact, a woman. But of course!

Of Course Harris is a Woman

That’s why I suggested that the ideal follow-up question from Blackburn to Jackson would have been, “Judge Jackson, are you a woman?”

And that’s why a headline on the Daily Wire stated, “Yes, Judge Ketanji Brown Jackson Can Define ‘Woman’ — The ‘Woke’ Left Just Won’t Let Her.”

How Did We Get to the Point That Pronouns Tell Nothing More Than a Person’s Preference?

As for Harris’s preferred gender pronouns, the fact that she felt it proper to share that information reminds us yet again of how deeply we have fallen off the cliff of reality.

The Vice President of the United States giving her preferred gender pronouns at the beginning of her talk? Really? (For another shocking illustration of just how far we have fallen, see my article, “Biden Administration Is A Vivid Illustration Of LGBTQ+ Activism On Steroids.”)

Of course today a woman could say, “My name is Rachel, and my pronouns are he-his,” since Rachel might choose to live as a woman and yet identify as a man. Why not?

These pronouns simply explain how we want people to refer to us. They tell us nothing about their biological sex.

This reminds me of a 2005 quote that I cited in A Queer Thing Happened to America. Please read it slowly to feel the full weight of the words: “Sally considers himself a gender outlaw, playing outside the traditional definitions of man and woman. Sally runs his business as a man and has not had sex change surgery but considers himself a woman.”

In the same way, in today’s world, what the Vice President could just as well have been saying was, “I am a biological male who identifies as a female and whose pronouns are she-her.” Why not?

After all, it was recently reported that, “The Merriam-Webster dictionary has updated its definition of ‘trans woman’ to ‘woman who was identified as male at birth.’”

So, a biological male who identifies as a female is a woman. The dictionary says so. There you have it.

Can Perception Overrule Color as Well as Sex?

All that being said, what no one seems to be talking about is the fact that Harris claimed to be wearing a blue suit. What does this actually mean? What if my definition of blue is different than hers?

Is this any less mad than the University of Pennsylvania nominating a biological male swimmer as 2022 NCAA Woman of the Year?

I do not deprecate those who genuinely struggle with gender identity issues, as I have said time and time again. My heart goes out to them in their struggles.

And I do pray for God’s best for the Vice President. May the Lord guide her into all truth!

This is becoming more and more evident every day. Let’s keep shouting!