Verses of Violence: Comparing the Bible and the Quran 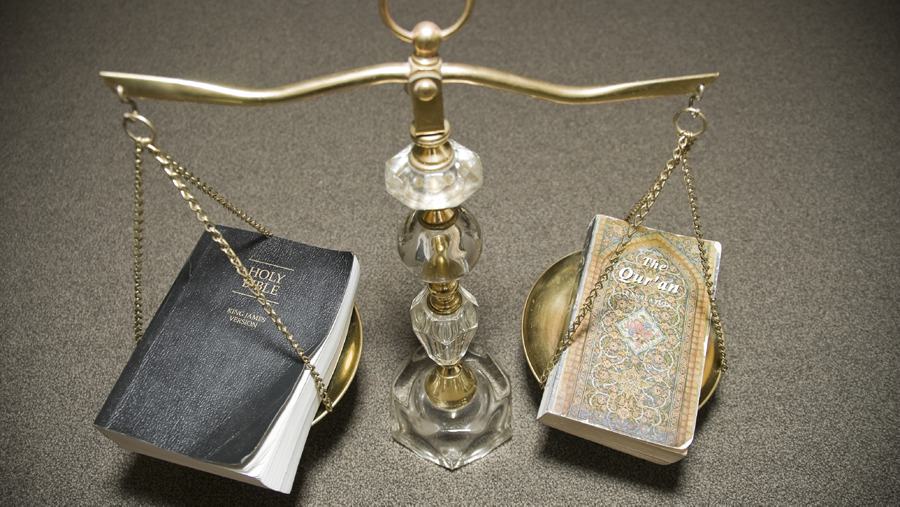 While these commands seem monstrous to many readers today, they cannot possibly be applied to contemporary situations and they have never been considered normative for all times in either Judaism or Christianity.

In contrast, the Quranic injunctions to smite at the necks of unbelievers and to kill and punish them in various ways have been applied to contemporary situations since the days of Muhammad, right up until today.

(For Christian reflections on the command to kill the Canaanites, see Paul Copan and Matt Flanagan, Did God Really Command Genocide? Coming to Terms with the Justice of God, and David T. Lamb, God Behaving Badly: Is the God of the Bible Angry, Sexist, and Racist?)

In the Old Testament, the Israelites were commanded to drive out the Canaanites; in the New Testament, Christians are commanded to drive out demons (evil spiritual beings), not people. In the Old Testament, sins like adultery and idolatry were punishable with the death penalty under Israelite law; in the New Testament, professing Christians who practice those sins are to be excommunicated (meaning, put out of the fellowship of believers), not executed.

For Jews, the Old Testament is read in the light of Jewish tradition, which also removed the death penalties for certain sins over a period of time. Jewish tradition also claims that some Old Testament laws were never meant to be taken literally (such as eye for eye, tooth for tooth, or the law calling for a woman’s hand to be chopped off for grabbing a man’s genitals when he was fighting her husband). Instead, Jewish tradition tells us that these laws always referred to monetary payment.

In contrast, the Quran is the final authority for Muslims — there is nothing that supersedes it or can contradict it — and so, to repeat again, throughout Islamic history, the violent verses have often been applied literally by Muslims in their treatment of unbelievers and enemies.

The ultimate example for Christians is Jesus. For Muslims, Muhammad is the perfect man and the model to be followed.

Jesus was crucified and ordered His followers not to defend Him from His fate. Muhammad, who began his mission as a preacher rather than a soldier, led pillaging raids (to get money for his followers), fought aggressive, offensive wars to subdue his enemies, and on one famous occasion, beheaded his Jewish captives.

In stark contrast, the most “violent” thing Jesus did was overthrow the tables of the money changers in the Temple and drive out the animals. How can anyone compare the two?

Jesus is called the Lamb of God in numerous texts, speaking of His sacrificial death on the cross, and He is worshiped by Christians as the Lamb who was slain. Do Muslims commonly think of Muhammad in those terms?

So, when a Christian is killed by a radical Muslim for refusing to deny his faith, both the Christian and the Muslim can point to their leaders — Jesus and Muhammad — and say, “I am following the example of my leader,” one by being killed for his faith, the other by killing for his faith.

I’m quite aware of ugly aspects of Church history, including the violence of the Crusades (in particular, against European Jews who were not part of the military conflict between Christians and Muslims), but examples like this prove the larger point: they are horrific exceptions to the rule and they are without New Testament support.

In contrast, wars fought in the name of Allah have a rich Islamic history, tracing back directly to Muhammad and the Quran.

As for wars that America engages in, such as the invasions of Afghanistan and Iraq, while many Muslims view these as “Christian wars” (since America is perceived by the Muslim world to be a Christian nation), these wars have not been waged in the name of Christianity but rather in the name of national security. If America was an entirely secular nation it could have engaged in such wars just as easily.

I do appreciate the fact that millions of Muslims, including many respected leaders, believe that the violent verses of the Quran were for also for a specific time and season, and I applaud them for repudiating the theology, ideology, and actions of radical Muslims worldwide. At the same time, the close association between Muhammad, the Quranic verses of violence, and violent Islamic history cannot be denied. This similar pattern cannot be found from New Testament times until today in practicing Christian circles. And where it can be found, it is aberrant.

Not surprisingly, while Muslims celebrate Muhammad’s bloody victory at Khaybar, Christians celebrate Jesus’ bloody death on the cross, followed by His glorious resurrection.