The Greatest Generation's victory over the armies of darkness should inspire all Americans as our country fights an invisible enemy. 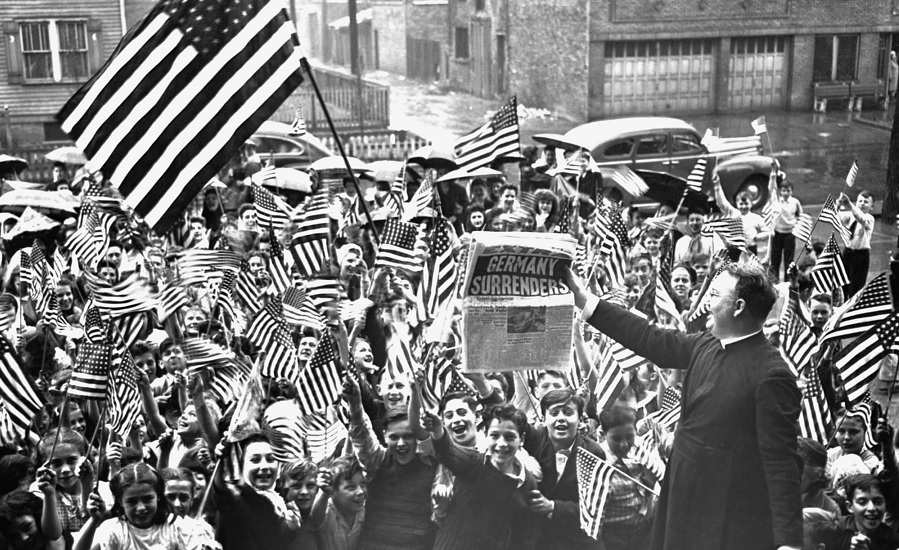 A parish priest waves a newspaper with news of Nazi Germany's surrender to Catholic school students in Chicago on May 8, 1945.

It’s hard to believe that on this day in 1945, Americans were truly united. All across our land, jubilant citizens were celebrating V-E Day while praying for the brave warriors still fighting World War II in the Pacific.

Seventy-five years later, our nation’s military, health care workers, first responders and ordinary citizens are busy battling an invisible enemy that’s still killing thousands per week. In addition to sickness and death, millions of Americans are experiencing a level of economic devastation not seen since 2008 and before then, the Great Depression.

Instead of uniting behind the everyday heroes trying to lead us out of this crisis by saving lives, America remains bitterly divided. With a presidential election on the horizon, many Republicans, Democrats and political activists posing as journalists seem incapable of setting aside their differences and putting our country first.

As we observe the 75th anniversary of V-E Day and honor the Greatest Generation’s historic struggle to reach that improbable moment, all Americans should strive to emulate their pride, patriotism and selfless courage. If those who came before us could simultaneously defeat the evil Axis of imperial Japan, fascist Italy and Nazi Germany, why can’t present day America come together to beat a virus?

When history books are written about America’s response to the COVID-19 pandemic, I want us to be remembered not as a generation that tore itself apart, but one that stepped up to collectively crush the coronavirus. Much like our military community’s heroic, unrelenting response to the 9/11 terrrorist attacks, we have a unique opportunity to not only save lives, but preserve the cherished American values of freedom, family and faith.

I recently watched two television series centered on alternate histories of World War II and its aftermath: Amazon’s The Man in the High Castle and HBO’s The Plot Against America. In that creative spirit, please permit me to present another scenario.

Imagine if immediately after Pearl Harbor, the party out of power focused on blaming President Franklin D. Roosevelt for the attack. Then, instead of being patriots, a partisan media started pushing those anti-FDR talking points, thereby whipping Americans into a frenzied blend of fear, anger and division. Rather than staying above the fray, imagine if President Roosevelt then expended much of his energy on fighting his political and media opponents instead of the nation’s real enemies.

Under those conditions, could FDR have successfully mobilized millions of citizens and soldiers to defeat Adolf Hitler’s army of darkness? I doubt it.

The 2020 presidential election is still six months away and should not dominate the thoughts or actions of any politician – including President Donald Trump and presumptive Democratic nominee Joe Biden – as thousands of Americans are dying. Every day, our leaders and those who cover them should have the same focus as health care professionals, first responders and the heroes of our military: saving lives. Other than also helping those experiencing economic devastation as a result of the COVID-19 crisis, nothing should matter more.

Will there ever be a V-COVID-19 Day in America? I hope so. To reach a historic moment even approaching the jubilation of May 8, 1945, however, more present day Americans must emulate those who earned the right to celebrate 75 years ago today. V-E Day didn’t happen by accident; it was the culmination of years of unity, shared sacrifice, bravery and a collective belief that eventually, God would shine a path for our nation and world to triumph over evil.

Time is running out to preserve the United States of America, which the Greatest Generation fought so dearly to save. It’s up to us.