If our nation's brave men and women in uniform can put politics aside while dodging enemy gunfire and roadside bombs, we have no excuse. 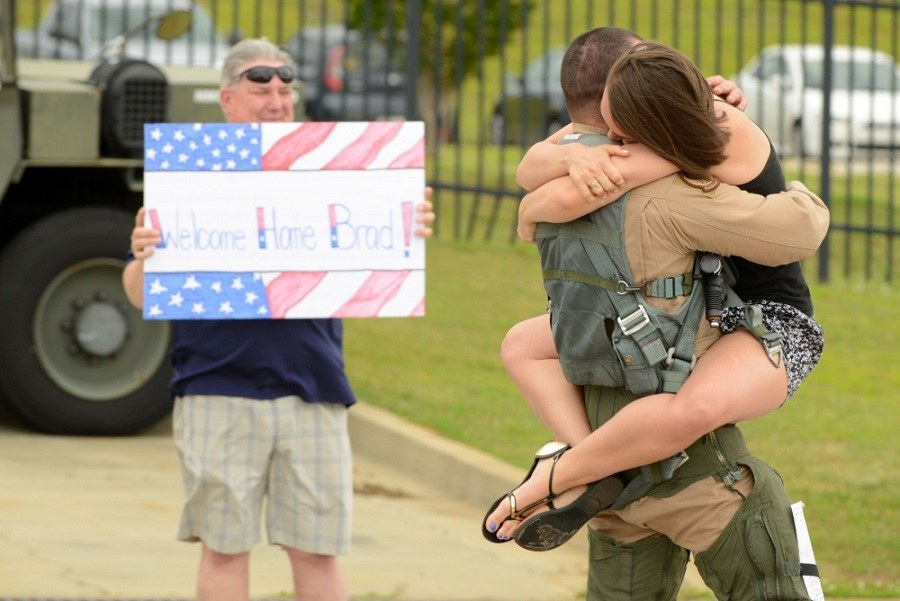 A U.S. Air Force airman embraces his wife after returning from Afghanistan last year to Shaw Air Force Base in South Carolina.

A few weeks ago, I was sitting in the living room of someone who lost two family members in Afghanistan. While discussing why these two fallen heroes joined the military and what they were fighting for, one subject never came up: politics. It simply didn’t matter.

Tuesday’s election will mark the ninth midterm or presidential contest since our military went to war after the terrorist attacks of September 11, 2001. Throughout 17-plus years of heated political rhetoric and cable news hysteria, one constant remains. The men and women of our military and their families are still risking everything to protect our rights, which include the freedom to disagree.

The war on terror is not a thing of the past, especially for the many service members who are fighting it. At this hour, tens of thousands of U.S. troops are serving in Afghanistan, Iraq, Syria and other perilous faraway places while military moms, dads, wives, husbands, daughters, sons and siblings worry here on the homefront.

You probably wouldn’t know it by watching the news, but since July, at least one American per month has made the ultimate sacrifice in Afghanistan. These are real warriors with very real families, yet many of us don’t know their names. So here they are, along with the name of another fallen hero who was killed in Iraq.

While Donald Trump was their commander-in-chief, I can almost guarantee that none of these soldiers enlisted in the Army to specifically serve President Trump, President Obama or their respective ideologies. These remarkable men wanted to do their part in preserving freedom and defending the defenseless.

Our Election is a Walk in the Park Compared to Afghanistan

If you spend the next few nights watching CNN, Fox News or MSNBC, you’ll see a lot of shouting, ugliness and even hatred. Yet as few “experts” will probably mention on-air, our elections are a walk in the park compared to those just held in Afghanistan.

Despite multiple terrorist attacks that wounded scores of innocent Afghans, millions voted, which would not have been possible without more than 17 years of sacrifices by U.S. and coalition troops. While the wisdom of America’s continued presence in Afghanistan can certainly be debated, even though it’s a virtual non-issue in the 2018 campaign, there is no question that the men and women of our military have helped advance the noblest of causes: freedom.

If Our Heroes Can Put Politics Aside …

I worked at CNN before spending much of the last decade meeting and writing about U.S. troops, wounded veterans, fallen heroes and their families. My somewhat unique perspective makes the current media landscape – and its relentless focus on divisive, hyperpartisan rhetoric – all the more frustrating. If the 99 percent of Americans who haven’t served in uniform were told more about the selfless deeds of our population’s bravest one percent, I firmly believe there would be a greater sense of national unity.

Disagreement is only one part of democracy, which would not exist without the selfless patriots who volunteer to defend it. If the thoughts of someone who lost two family members to war aren’t dominated by what divides us, why should ours be?

Every American should vote on Tuesday. At the same time, we should remember that in places like Afghanistan, Iraq and Syria, a soldier, sailor, airman or Marine who votes Republican is putting his or her life in the hands of a Democrat, and vice versa. If our heroes can put politics aside while dodging enemy gunfire and roadside bombs, we have no excuse.

Tom Sileo is a contributing senior editor of The Stream. He is co-author of three books about military heroes, including 8 Seconds of Courage, which will be released in paperback on Tuesday. Follow Tom on Twitter @TSileo.