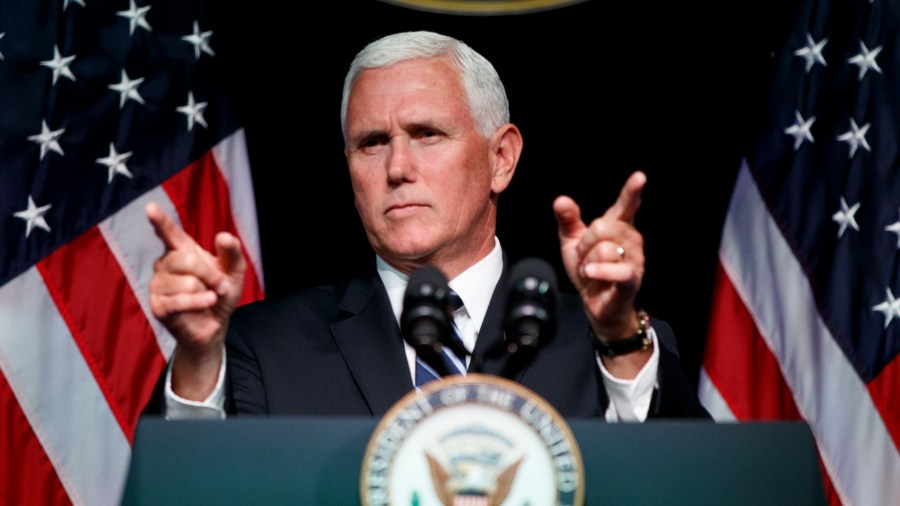 Vice President Mike Pence gestures during an event on the creation of a U. S. Space Force, Thursday, Aug. 9, 2018, at the Pentagon.

In 1985, Muscatine, Iowa, was visited by a young Chinese official named Xi Jinping. He “led a sister-states trade delegation to Iowa cities and farms.” Xi stayed with a local family for a few days and had a warm and memorable experience.

A few years ago, an older and much different Xi came back to Muscatine for a visit. Not as a young “ag” official, but as leader of the world’s most populous country.

No doubt Xi and the gracious people he met in the heartland so many years ago have pleasant memories of one another. That’s a good thing.

But there’s a big divide between personal affection and the tough world of international politics. And Xi means deadly serious business when it comes to China’s military rivalry with the U.S.

A few days ago, China launched “a hypersonic aircraft … that could one day be capable of firing nuclear missiles around the planet at up to six times the speed of sound.”

The U.S. is developing its own hypersonic technologies, as is Russia. But our Defense Department has acknowledge that the U.S. is “already five to 10 years behind in the development of an anti-missile system to thwart advanced hypersonic weapons that are now being tested by China and Russia.”

“Russia and China are developing ways of degrading or destroying U.S. satellites in wartime,” writes the Lexington Institute’s Loren Thompson in Forbes. “If such attacks achieved their intended aims, they would thoroughly disrupt the U.S. military’s ability to conduct war anywhere. For instance, the U.S. Army figures each of its armored brigades contains over 2,000 pieces of equipment that rely on space assets to function. Kill the satellites, and the brigades are hobbled.”

Currently, as another report notes, “the U.S. does not have a comparable technology and is falling behind in the development of hypersonic missiles.” Indeed, a 2017 report by the RAND corporation argues that hypersonic weapons could likely get through just about all missile defense systems.

America’s missile defense program was a key element in the fall of the Soviet Union.  That great military strategist Dan Rather tried to demean it by dubbing the program “Star Wars.” And the mainstream media in general had a field day mocking President Reagan’s vision for a missile shield that would defend our country from intercontinental ballistic missiles.

The Soviets didn’t mock. They were shaken. They poured billions into their own missile defense program trying to compete with ours.

They failed. So did their evil regime — in part, because they realized America would not be defeated in our commitment, under Ronald Reagan and then George H.W. Bush, to keep them from successfully attacking us.

If our missile defenses, already weakened under President Obama, become more like Swiss cheese than solid steel because of our adversaries’ hypersonic and other high-tech weapons, America’s ability to protect itself will be put at deadly serious risk.

A Pentagon report, issued last week, summarizes the nature of the threat:

For all of these reasons, the launch of President Trump’s new Space Force initiative is more than timely. It’s critical.

Vice President Pence, who chairs the National Space Council, last week made a compelling case for the administration’s proposals to strengthen all facets of our high-tech warfighting abilities. “Our adversaries have transformed space into a warfighting domain,” he said. “And the United States will not shrink from this challenge.”

(I recommend all readers of The Stream take a few moments to read the text of Mr. Pence’s historic speech here).

One of the reasons the upcoming fall election is so critical is the Democrats’ desire to deplete military spending to fund failed social programs. In their world, financial redistribution is more important than national security.

Yes, they would deny this. But a close look at the Obama years proves the point.

Xi Jinping had a good time in Iowa, eating good American beef and being treated like a member of a kindly farm family. That’s American hospitality at its best.

But a warm and cuddly friend of the U.S. he is not. His weapons systems prove it. And ours must prove we know it, and that, as ever in history, we’ll rise to the challenge.