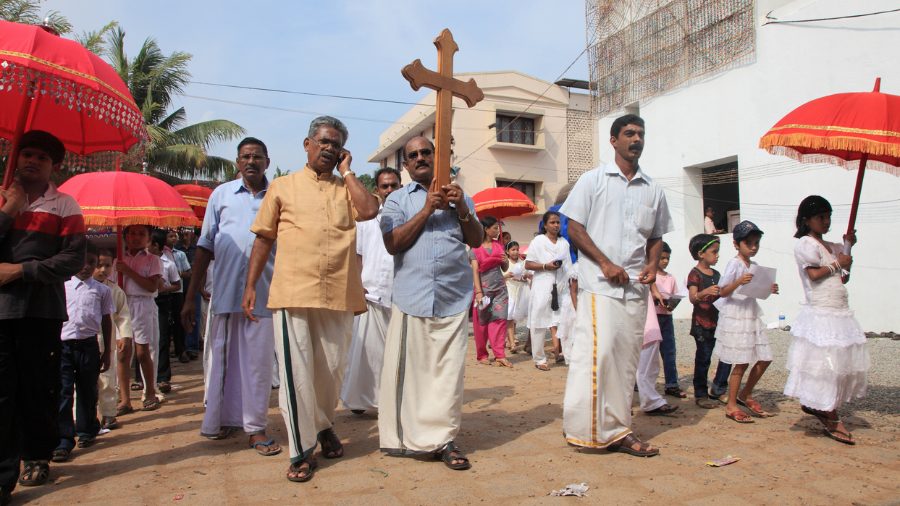 Two pastors, not pictured, were killed in India by mobs. A cultural climate that is hostile to Christianity has led to rising violence against Christians in India. File: Unidentified devotees hold the holy cross on their head during the annual celebration of the Malankara Orthodox Church on November 2, 2010 in Parumala, Kerala, India.

You might never know their names. But you need to hear their stories. Two more pastors have been killed for their faith in India, yet the work they started continues.

It is very true that persecution is intensifying in India. But the gospel cannot be stopped. Not by mob violence. Not by government opposition. Not by intimidation. Not by bloodshed.

In the midst of many deadly challenges, the name of Jesus is being proclaimed. Let me tell you the story.

Christ Was Honored in Their Lives and Their Deaths

I am just now returning from my 27th trip to India, a country I love dearly and a country I visit annually to spend time with dear friends there.

I heard the report about these two martyrs from another pastor who worked with them closely. Not only so, but I was directly connected to both of them, having laid hands on them and commissioned them some years back. They had graduated from a colleague’s ministry school, and I spoke at their graduation ceremony. And when we prayed over them, we sent them out to share the good news of Jesus with the lost, whatever the cost or consequences.

All of the graduates pledged themselves for the gospel, whether by life or by death.

These were not just idle words for them. They knew the dangers inherent in their mission. They knew that standing for Jesus might literally cost them their lives, as it has with millions of others worldwide in previous generations.

Every Single Village has Been Reached

On my first trip there in 1993, we visited a tribal region whose location I will not mention for security purposes. Suffice it to say it was quite remote, to the point that we were warned not to leave our guest quarters at night because a man-eating tiger was on the loose. (I kid you not.)

It was tribal in every sense of the word, and its many villages had almost no churches. (To give you a picture of how primitive this setting still is, for $50 a month, you can support a pastor and his family full time. Yes, $50 meets all their monthly needs.)

Over the years, every single village has been reached, as Christian workers trekked over mountains and endured all kinds of hardships to make Jesus known. The light has shined brightly in the darkness, and many thousands of lives have been transformed.

But there have always been militant Hindus who have opposed the work, along with radical communists (known as Naxalites). And so, over the years, many of the workers have been threatened or beaten, and some have been killed.

Persecution Against Christians in India is on the Rise

But now, under the current government of Prime Minister Modi, hostility against Christians has been rising, to the point that India is now ranked No. 10 on Open Doors’ list of the most dangerous countries for Christians. (This is the first time India has made the top ten.)

In short, Modi’s party, the BJP, wants India to be a Hindu nation. The chief threat to their goal is Christianity. Many Hindus are converting to Christianity every year. Although the BJP is not formally persecuting Christians, its openly hostile stance has stirred up negative sentiments among the populace. More radical groups, like the RSS, are now running free.

As a result of this hostile climate, we’re seeing pastors killed, church buildings burned down, and congregants dragged out of services and beaten. And for the most part, the police are simply looking the other way.

As the Open Doors report states, “Hindu nationalists in India continue to attack Christians with what seems like no consequences.”

A report on the With Open Eyes website sheds further light: “Modi has increasingly tied Hinduism to identity as an Indian citizen. The belief that any religion other than Hinduism is foreign to India and must be eradicated is emphasized through the pressures Christian converts face from family and friends to return to the national religion.”

As a result of this hostile climate, we’re seeing pastors killed, church buildings burned down, and congregants dragged out of services and beaten. And for the most part, the police are simply looking the other way. Christians in the West must not ignore this!

In the case of these two pastors, within the last year, in different villages in this tribal region, they began to build small church buildings for their congregations. (In America, we would hardly consider these structures to be shacks. But in these villages, they take on great importance, especially since most of the people live in tiny hut-type homes.)

In both cases, the villages rose up as a whole to attack these men, and both were killed.

But that is not the end of the story.

The villages rose up as a whole to attack these men.

Somehow, the construction was completed after their deaths. Their widows are now caring for the Christians who meet there. (For those of you who have a problem with women in ministry, deal with it. I’m sure the Lord is not troubled by the pastoral ministry of these Christian widows.)

As for their children, they are being cared for and educated in the ministry’s headquarters in the main city about 5 hours away. There, the ministry has a thriving children’s home and school where it cares for orphans. This arrangement is necessary, not only because of their husbands’ deaths but because of constant health threats and virtually no schools.

No Justice in This World, But Love Endures

As for the killers, not a single thing has been done. No charges are being brought. After all, the villagers turned on these pastors together, and it was Christians who were killed. Why would anyone care?

Yet it’s not as if India does not know how to punish criminals. As the New York Times reported on December 6, “Extrajudicial killings are common in India. The term for a police killing here is ‘encounter’ and in recent years the Indian police have killed countless people in such encounters. Many of the killings are later revealed to have been staged or planned.”

But there will be no justice in this world for the murderers of these two Christian pastors, both of them young men.

And the truth be told, they would not want to see justice as much as mercy. They would want to see their killers find forgiveness and redemption in Jesus. And it wouldn’t surprise me to hear in years to come that some of their persecutors are now part of the church they once tried to destroy.

That is the power of the gospel, and that is why persecution and violence will never quench the flames of Christian love.

Please pray for the persecuted church of India. And if you would like to support one of these tribal pastors or these orphans, click here or here. (I personally vouch for the total integrity of this ministry.)

You can also write to your elected officials, asking them to urge President Trump to call on Prime Minister Modi to foster an environment of religious freedom.

Then, have a good look in the mirror and ask yourself: “Compared to these precious Christians in India, who are willing to die for Jesus, what kind of Christian am I?”