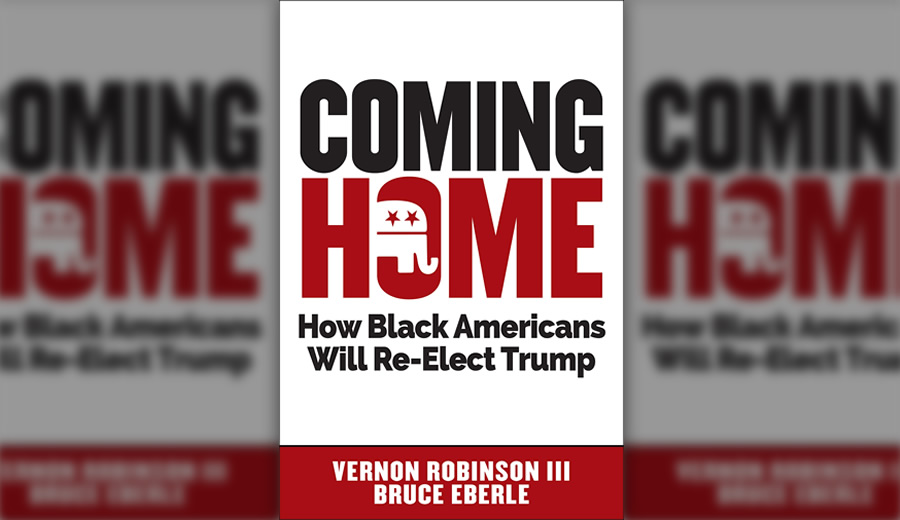 Did you know that black voters are responsible for Trump’s 2016 presidential win? Black Americans in the swing states of Pennsylvania and Michigan tipped the election for Trump. Over 20% voted for Trump. Democrats need 90 to 95% of the black vote to win presidential elections, and they didn’t get it.

This changes everything. And not just in 2016.

We are currently witnessing a sea change in voting behavior that Vernon Robinson III and Bruce Eberle have identified in their terrific new book, Coming Home: How Black Americans Will Re-elect Trump.

The book begins with a history of the relationship between blacks and the two major political parties. Blacks identified for years with the Republican Party, and switched to the Democratic Party.

They aligned themselves with the newly created Republican Party in the 1800s since it was the abolition party. That began to change when President Franklin D. Roosevelt came along in the 1930s. FDR reached out to them in a way no one had before. They transferred their support from the Republican Party to him, and from there to the Democratic Party.

But the authors argue that the reality was that Democrats hadn’t treated blacks well. In 1900, the southern states spent half as much on blacks’ schooling as they did on whites. Then Democrat Woodrow Wilson got elected and liberal progressive “reforms” were imposed. The amount spent on blacks dropped to just 13% of that spent on whites.

In the 1960s, the transfer of blacks to the Democratic Party was complete. What cemented it was Barry Goldwater’s refusal to support the 1964 Civil Rights Act — even though more Republicans than Democrats voted for the legislation. Eberle told me that the reason all the blame went to Goldwater was that the news media supported the Democrats.

It was the first time someone in politics was publicly called a racist, ironically by Democratic President Lyndon Johnson, who was fond of using the n-word. The name calling worked so well the Democrats have used it ever since.

The media tried to portray Goldwater as a racist. He was the opposite. When he took over the family store in Phoenix, he desegregated it for both black customers and black employees. In the 1940s, he led the successful movement to desegregate lunch counters in Phoenix. He desegregated the Arizona Air National Guard two years before President Harry Truman integrated the military. In 1953, as senator-elect, he insisted that the Senate cafeteria desegregate.

If Goldwater was appealing to segregationists, he would have touted his opposition to the 1964 Civil Rights Act. But instead, he said while campaigning that he would enforce the Act if elected president. He wasn’t sending coded messages to segregationists.

President Lyndon Johnson was the Racist

Unfortunately, leading conservatives like William F. Buckley, Jr., also did not support the Civil Rights Act. Their reasoning was not racist. They merely wanted less government interference and worried about the expansion of federal power. The Democrats still successfully portrayed them as racists.

After that, conservatives stopped spending money or time trying to win the black vote. After the Goldwater election, Republicans were told by strategists not to do any outreach into the black community or blacks would show up at the polls and vote Democrat.

In contrast, President Lyndon Johnson was not supportive of blacks until President John F. Kennedy was assassinated. Then he changed his tune and signed the 1964 Civil Rights Act since he was advised he would need to sign it. He made no attempt to stop segregation in the South however. Republican President Richard Nixon did.

The authors also destroy the myth that racist southern Democrats became Republicans due to rejecting civil rights for blacks. Only one racist Democrat became a Republican in 1964, Strom Thurmond. The Democrats who became Republican as part of the so-called “Southern Strategy” left their party because they preferred a more conservative approach to government, not because they didn’t like blacks.

Democratic President Bill Clinton is another Democrat whose racism the media ignores. He worked on the campaign of segregationist William Fulbright. In 1993, he awarded him the Presidential Medal of Freedom.

Blacks Disillusioned With the Democratic Party

When Trump came along, Eberle told me, blacks had grown disgruntled with the Democratic Party. Things weren’t getting better for them, and the Democrats had moved away from their values on issues like school vouchers and abortion. The Democrats are greedy and see illegal immigrants as future voters, so they want open borders. But this suppresses wages, since illegal immigrants will work for less. The Democrats’ energy restrictions, such as raising the price of gas, also hurts blacks, many who are lower and middle class.

Blacks moved over to the Democratic Party because of FDR, not because the Democratic Party attracted them. Likewise, blacks are migrating to the Republican Party because of Trump. It’s been an organic movement. They thought he would better their situation and he did. Trump came along and turned things around. Black-owned businesses increased by 400% in just one year. Black unemployment is at the lowest rate in recorded history. Trump has implemented criminal justice reform, so fewer nonviolent black men are locked up.

Eberle says blacks are persuadable if you’re willing to talk with them. They support the Second Amendment. One issue getting no coverage is violence in big cities — what about the families forced to live there? The left wrote off those communities. Gangs exist since the Democrats destroyed the black community.

The authors include a lengthy list of prominent black conservatives around the country, noting that 20 years ago a list like that would have contained only 10 to 15 names.

A Strategy to Win Back Blacks

Conservatives went into big cities like Baltimore and helped clean them up. They need to continue this. The Republican Party of Orlando, Fla., is establishing a satellite office within the black community where members will hand out flyers. This is straight out of the FDR playbook; his supporters distributed hundreds of thousands of pieces of campaign literature describing the impact of the New Deal on blacks. Republicans need to speak to black audiences. The black church is the most powerful part of the black community.

The black church is the most powerful part of the black community.

One ad that proved effective in the 2016 race was informing black voters about Hillary Clinton referring to some black men as super-predators. Eberle observed that unlike, say, his German great-grandparents, blacks have never fully integrated. They have their own radio stations, but you don’t hear about German radio stations. So Republicans need to go where they’re listening.

The authors say the GOP should reach out to blacks on four issues, in this order: 1) the right to life, 2) school choice, 3) jobs, and 4) a secure border. Polls have been done showing that blacks think Democrats have the conservative positions on these issues, not Republicans, because they are uninformed. Only 1% of Fox News viewers are black. Unfortunately, Eberle told me, blacks have been told that Fox is racist. It’s a knee-jerk reaction. When in reality Fox News has plenty of black commentators.

The Reality of Who is Racist

The Democrats call Republicans racist in order to keep blacks voting for them. The reality is different. For example, Richard Spencer, the organizer of the tragic Charlottesville rally, “is the advocate of a powerful centralized government who dislikes Ronald Reagan and dislikes America’s founders but admires the slaveholding founder of the Democratic Party, Andrew Jackson.”

Eberle says if people want to make a difference in this area, they should work with their local Republican Party or the Trump organization. Robinson said people in the black community are interested in hearing from official representatives of the Republican Party. They don’t necessarily want to hear from blacks like him. The book includes a sample speech Republicans can use when addressing the black community, and brochures to hand out.

It’s a fascinating read and you won’t be able to put it down.