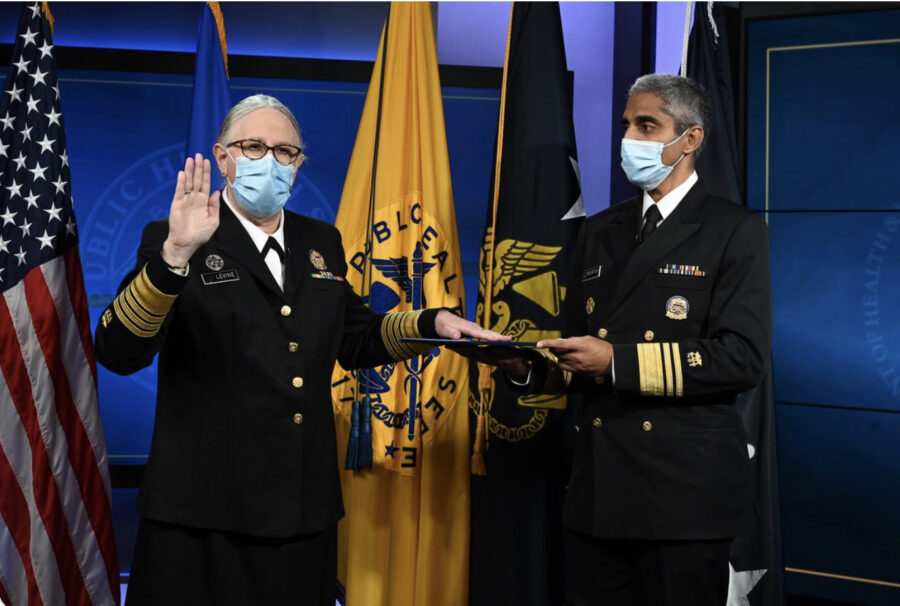 By Jennifer Hartline Published on November 1, 2021 •

Last week I wrote an article about Dr. Richard Levine and his military “promotion” to a four-star Admiral. Many, including the Surgeon General of the United States, gushed that this was an historic achievement for “women.” Levine was called the “first female” to reach such a status (emphasis mine).

I wrote that Levine is not female, therefore not a woman, and is, in fact, a man. I refuse to refer to him in any manner as a woman. I called out the cowardice and stupidity of all those who are lining up to applaud and support the delusion that Levine is a woman.

On Twitter, I sent out several tweets to the same effect. 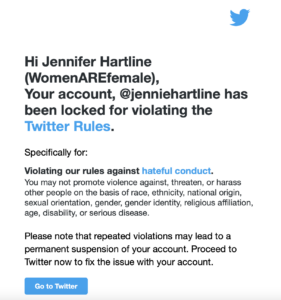 I appealed their decision and said simply that I’d said nothing untrue or hateful. It is not hateful to say a man is not a woman.

They replied that they’d reviewed my appeal and their decision is unchanged. I can delete the tweets they deemed “hateful” and have my account restored. If not, I will be locked out forever. In fine print Twitter states, “By clicking Delete, you acknowledge that your Tweet violated the Twitter Rules.”

See for yourself the “offensive” tweets: 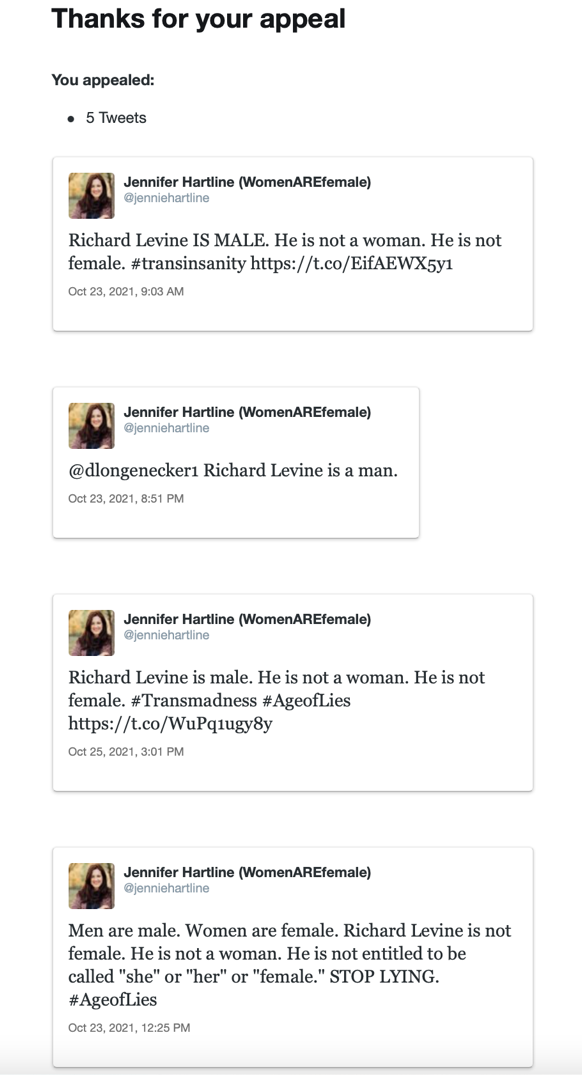 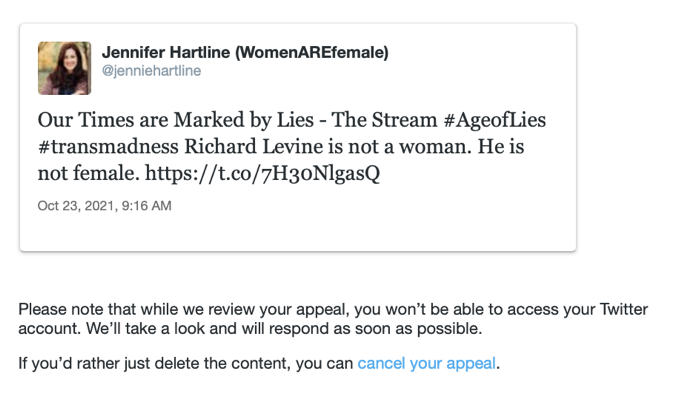 I refuse. To delete my tweets in order to have my account again is agreeing with Twitter that I’d done something wrong and hateful. I will not make such a concession.

Stop and soak in the irony of this: Twitter is telling me — a woman — that it is hate speech to say, “a man is not a woman.” That is some audacious misogyny.

So, that is the end of my Twittering and Tweeting. So be it. I will not offer a pinch of incense to their transgender idol. For that is what the “LGBTQIA+” ideology has become in our society — an idol that all must bow and worship or else.

The Erasure of Women is Real

Women must agree that woman is meaningless since any man can claim it for himself and all must go along. Women must celebrate their own erasure by men and corporations and even modern medicine. The Lancet literally referred to women as “bodies with vaginas.”

Even crime statistics are falsified for the sake of this idol. Our incompetent president insists that male criminals who claim to be women must be housed in women’s prisons.

The real word for all of this is madness. It is wicked. And it is inhuman. The de-constructing of human sex is diabolical.

If the Democrats and the trans-lobby succeed, there will be no such thing any longer as a female-only public space anywhere. Restrooms, locker rooms, dressing rooms, showers, shelters will all cease to be safe for women and girls. Any man will have the right to invade any space where women and girls are undressed and vulnerable.

And this is called “progress” and “compassion” and “equity.”

The real word for all of this is madness. It is wicked. And it is inhuman. The de-constructing of human sex is diabolical.

I Will Not Lie

I realize I’m a nobody. My absence from Twitter won’t be felt or noticed. History will forget me before my body is cold. I’m one person, one voice in a cacophony of billions.

Still, I will have to give an account one day to God for how I used my voice, what I said, and what I did not say. My integrity is mine to keep or throw away. I decide whether I will speak truth or lies.

I will not be compelled to lie.

Men are male. Women are female. We are created male and female in the image and likeness of God. Our bodies tell us who we are. Biology is not bigotry. Sex and gender are not distinct from one another.

I refuse to deny these truths. I hope all of you reading this will also refuse.

I Have a Request of You

I have never asked this before in any previous article, but I’m asking now. If you’re reading this, please share it. Share it on social media for me, especially on Twitter! Tell your own sphere of the world that Twitter has banned a woman for saying a man is not a woman.

And refuse to lie. Do not bow to this idol. Do not surrender the reality of human sex to those who want to dismantle it. Do not comply with the irrationality of “trans.” Defend the immutable truth of human sex as male and female.

Say it with me: Men are male. Women are female. Always. The End.

Jennifer Hartline is a senior contributor to The Stream.

Let’s Argue Instead of Judge