Our Times are Marked by Lies 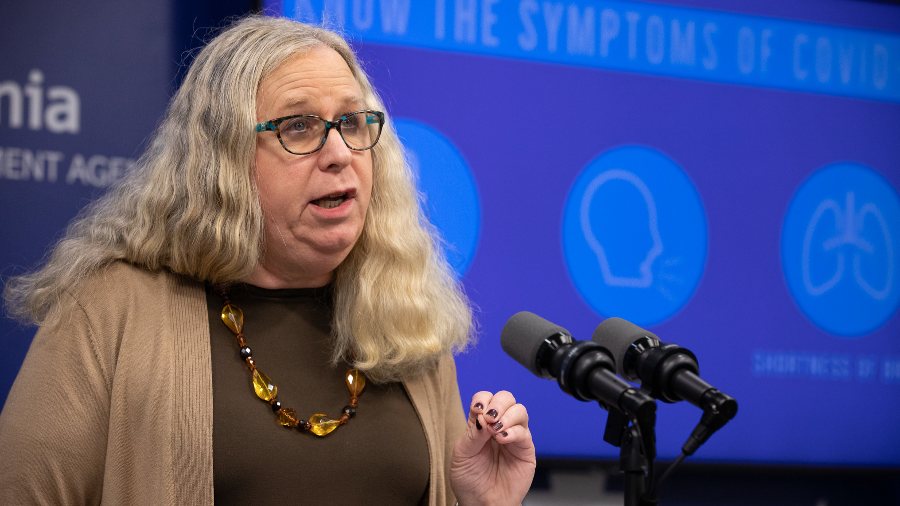 Our times are marked by lies. Forget the flights into space, the self-driving cars, the robots, the computers in our hands, the crypto currency and the blockchain. Forget every other stunning achievement we may be witnessing. If mankind survives another century, this era will be most remembered for the staggering audacity and lunacy of our lies.

This week we were subjected to another piece of national rainbow propaganda, courtesy of the Biden administration. Assistant Health and Human Services Secretary, Dr. Richard Levine, was declared the “first female four-star officer of the U.S. Public Health Services Corps.” (emphasis mine)

When female becomes not a fixed biological reality of human sex but Play-doh in the hands of disturbed males who claim it as their “identity,” the appropriate response is not docility but ferocity.

(Levine calls himself Rachel now and insists he is a woman. The rest of us are told we’re obliged to go along with his delusion and refer to him accordingly. I refuse.)

Look at this tweet from no less than the Surgeon General of the United States:

He Said it Publicly

Silly me, I always thought the Surgeon General had at least a rudimentary knowledge of human biology and science. But somehow, Dr. Murthy is confused because he’s standing next to another male in the photo and refers to this male in his tweet as “female.”

Dr. Murthy is on record before the entire world as having no understanding of the human female. He has said publicly now that he believes a man is female. By sheer force of will, he agrees, with the aid of pharmaceuticals and perhaps mutilating surgery, a human male can become female.

This is the written declaration of our nation’s leading medical official. How does he look himself in the eye? He has sold his integrity to the sleaziest group of mongrel tyrants in history.

Female in the Hands of Disturbed Males

I am not obliged to sit sweetly and be respectful as women are erased. When female becomes not a fixed biological reality of human sex but Play-doh in the hands of disturbed males who claim it as their “identity,” the appropriate response is not docility but ferocity. I am not obligated to surrender reality and go along with insanity.

I will not pretend that Richard Levine is a woman. I will never call a man “her” or “she” or describe him as “female.” Every person, man or woman, who capitulates to this trans-madness is an enemy of their own human reality.

I don’t care how many doctors sell their souls and become useful butchers for this madness — it will never be health care. It will never be progress or compassionate to mutilate a healthy body. It is unspeakably heinous to do this to a growing child, something Levine wholeheartedly endorses.

There is no such person as a “transgender.” We are created male and female, man and woman. Men ARE male. Women ARE female. Gender is not distinct from sex.

The corporate fabrication of “gender identity” is just that — a fabrication. It is a lie. An obscenely well-funded, diabolical lie. If you value your humanity at all, do not cooperate with this lie.

Jennifer Bilek of the 11th Hour Blog says it well:

Instituting gender identity as a legal construct deconstructs what it means to be human at core: a biologically, sexually dimorphic species.
This is the point.
Think about this carefully.
Gender is an obfuscation.
The state is deconstructing sex.

The corporate and political entities pushing this ideology know this very well. They also know the acute desire to be liked, to be called a good person, to be part of the latest popular movement, to be on the “right side of history” will gain them scores of people who will be proud of their “progressive,” “enlightened” position, never actually thinking through what it truly means.

But that is the core of it: you will either speak the truth or repeat the lie. There is no middle ground, no option to remain neutral.

And now we have the Biden administration parading a delusional man in his utterly unearned military uniform, announcing to the world that celebration and applause is in order! Such a proud day for women! The first “female” four-star officer! What a historic day!

Indeed. It will be remembered forever as a historic low point for our nation and our military. A day when our “leaders” sunk so pathetically, with unequaled cowardice, groveling and pandering to a delusion.

A day when the truly admirable service and sacrifice of countless women in our military for decades was soundly, cruelly mocked. Sit down, ladies. This guy just stole your spot, and you’d better darn well stand and salute him.

Applaud the lie! Cheer for the lie! Celebrate the achievement of the lie! Say it with me: the best woman is a man! Weep for joy at this glorious progress! There are no mothers, no pregnant women, no nursing women, no women at all! Just bodies with vaginas!

What an historic time indeed. The Age of Lies.

Now That the Left Has Rewritten Ruth Bader Ginsburg, What’s Next?