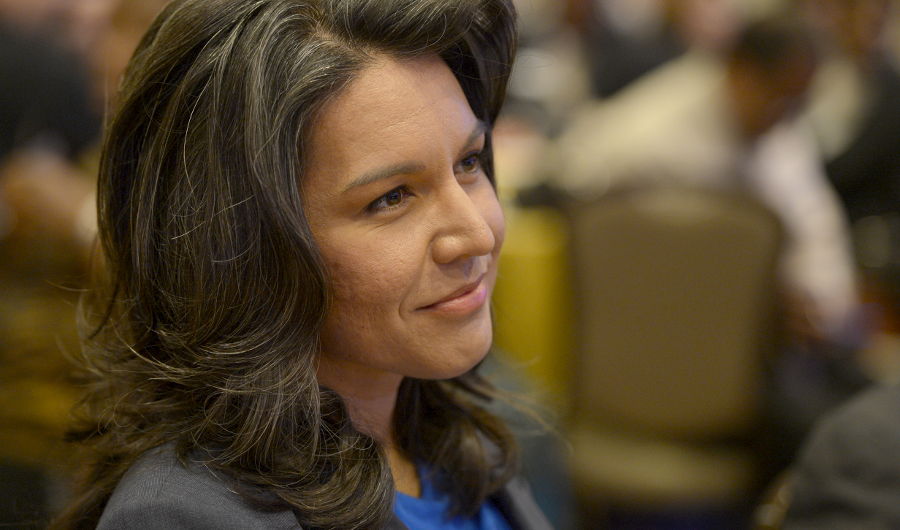 If you’ve been morbidly curious enough to watch the Democratic primaries, you’ve probably noticed the only interesting candidate. I mean Tulsi Gabbard, with her sane foreign policy views.

Apart from her, the field of contenders seems to be reading from one shabby script. They “know” that President Trump cannot possibly win re-election. So they’re treating the presidential race like a Democratic primary in Boston. That is, as de facto, the genuine election.

We’ve had so many crushingly costly wars since 2001, you’d think that the candidates would address foreign policy. But few of them seem interested. Several of them supported disastrous American interventions, such as Iraq and Libya. But now that it’s way too late, they assure us they wouldn’t make such mistakes again. Are you impressed? Neither am I.

Tulsi Gabbard is the exception. She played no role in promoting those conflicts. But she did serve bravely in combat in Iraq. And she has returned to speak for the soldiers we’ve squandered overseas, chasing goalposts that never stop moving. Also for the civilians who suffered brutal ethnic cleansings, when we promised “liberation.” And even for taxpayers, whose money got poured out by the trillions in the desert, profiting only military contractors with good connections.

The high point of the most recent debate? When Gabbard challenged Sen. Kamala Harris for her hypocrisy and authoritarian instincts. She noted how Harris was a ruthless and merciless prosecutor of drug offenders, then joked about smoking marijuana herself. Gabbard noted how hollow Harris’ rejection of capital punishment rings. You know, since she deep-sixed evidence that would have freed an innocent man from Death Row.

And Harris was wounded. There was political blood in the water. So what happened next? Big Tech’s censors went after Gabbard again. She was already suing Google for suspending her ads (and no other candidates’). Now, in the wake of her big moment at the debate? As ReclaimtheNet reports, her duel with Harris

briefly propelled Gabbard to the top of Twitter’s trends, albeit with an accompanying article that didn’t mention Gabbard or the moment in question.

Then mysteriously, Gabbard was scrubbed from Twitter’s trending list while mentions of the nine other candidates remained. The description for #Harris even acknowledged the interaction and said that Harris was trending with Tulsi. However, no trending hashtags for Gabbard appeared on Twitter’s list of trending hashtags.

Time for a Coordinated Smear of Tulsi Gabbard

And the official talking points of the chattering class went flying to network offices.

After the debate, CNN anchor Anderson Cooper asked Gabbard about the Syrian dictator Bashar al-Assad and people started to use a section of the interview to suggest that Gabbard refuses to criticize Assad’s actions, even though the full interview shows her addressing this.

Right after that, as if on cue, the hashtag #Gabbardrussian was suddenly everywhere. Tweets started appearing that accused Tulsi Gabbard, instead of Donald Trump, of being a Russian agent.

What on earth is that about? On what basis do people level the shocking charge of dual loyalty, even treason, against a U.S. member of Congress and combat veteran? It reminds me of old, anti-Semitic canards about Jewish Americans and Israel. And here’s where Christians ought to get very, very suspicious. And where I get angry.

Tulsi Gabbard flew to Damascus, to meet with that country’s leader, and try to avoid a U.S. war on behalf of al Qaeda.

I remember when the War Party — including the whole political spectrum from George W. Bush to Joseph Biden — promised that an invasion of Iraq would yield peace and prosperity. That the oil from the invasion would pay for the whole operation. That we’d build a fresh democracy in Iraq, whose grateful citizens would promptly respect the rights of religious minorities. Especially the almost 1 million Christians whose churches have been there since St. Paul went to Damascus, while most of our ancestors were worshiping rocks and trees.

It didn’t pan out that way. Most of those million Christians were driven out by Islamists, if they weren’t killed by ISIS or herded into rape camps. The U.S. intervention in Iraq was a catastrophe for Christians, Yazidis, and other religious minorities. I know because I’ve met them. I’ve toured the miserable settlements where Iraqi Christians still live, because Islamists won’t even let them enter refugee camps. I’ve listened to fathers tell me what it’s like to see ISIS steal their wives and daughters.

But that didn’t satisfy the America-last war jockeys. They wanted to repeat the Iraq war, only this time targeting Syria. As in Iraq, a secular dictator who didn’t target Christians but did cozy up to Russia faced off against his enemies. In Syria, the only powerful forces trying to overthrow Assad were radical jihadists. Men linked to al Qaeda, and some of them veterans of ISIS. Still, Senator John McCain and other neoconservatives wanted the U.S. to arm them and fund them.

During the foreign policy debate in the GOP primaries, several candidates even demanded that the U.S. risk war with nuclear-armed Russia by shooting down Russian planes. All to help … al Qaeda, the folks who bombed the World Trade Center and the Pentagon. Among the GOP candidates, only Rand Paul, Ted Cruz, and Donald Trump rejected this madness. As Jack Hunter writes:

[T]here have been multiple reports that the US was aiding al-Qaeda with its Syrian rebel support. Even President Trump acknowledged this, thus ending Obama’s policy in 2017.

Among the Democrats, Tulsi Gabbard stood almost alone in speaking up. She went further, and flew to Damascus, to meet with that country’s leader, and try to avoid a U.S. war on behalf of al Qaeda.

With Trump’s election, the U.S. pivoted, and instead of backing jihadis, it allied with Kurds and Christians. The Stream has been one of the few venues reporting on the oasis of religious freedom that emerged in northeastern Syria. The Syrian Democratic Forces based in that oasis fought ISIS on our behalf, losing tens of thousands of soldiers and finally winning. American deaths? We lost 73 brave service people.

Yes, Bashir Assad is still in power. He’s still a dictator. But you know what didn’t happen? A massive, expensive U.S. intervention that lost thousands of American lives. Nor did we shoot down Russian planes, risking World War III. Nor did al Qaeda march into Damascus and slaughter the Christian men and boys, then march women and girls into rape camps. That is what happened when Turkey helped jihadis invade the Afrin region in January. If it had been up to the War Party, none of that would be true.

So yes, Rep. Tulsi Gabbard helped stop a useless war that would have meant genocide for Christians. Does that make her a “Russian asset”? That’s what some people with a lot of cash to throw around want you to think. But who ever said that military contractors don’t know how to exert influence?

I’m proud that a congresswoman from my home state of Hawaii helped guarantee peace and religious freedom. I wish more Democrats, and more Republicans, had her solid, patriotic priorities.

Jason Jones is a senior contributor to The Stream. He is a film producer, author, activist and human rights worker. You can follow him @TGCWithJason. Read his book on peace and freedom, The Race to Save Our Century.