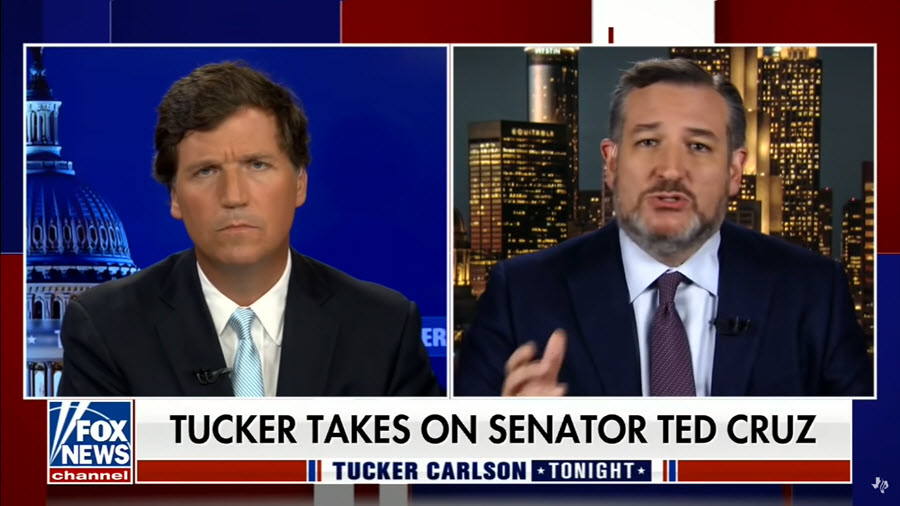 It was disturbing when Ted Cruz told the Senate last week that the Jan. 6 rally of 2021 was a “violent terrorist attack on the Capitol.” But after widespread backlash, Cruz did a follow-up interview with Tucker Carlson, where he said something even more disturbing: He insisted he had only been referring to a “limited number” of rally attendees.

In the first case, he suggested that the hundreds of thousands who attended the rally were terrorists. A lie, yet one so obviously silly that it could hardly do much harm — except to his own political career.

Faced with a choice between a popular, powerful senator and presidential hopeful on the one hand and the vulnerable men and women he was lying about on the other, Carlson chose to be in solidarity with the powerless.

But in the second case, Cruz did something far worse: He attempted to divide us between sheep and sacrificial goats — singling out the handful of rally attendees most targeted by the powerful — and then reunite his “base” around the ritual of sacrificing those few.

Cruz seems to have chosen a path of solidarity with the powerful — with the deep state and the thoughtless mobs they manage to mobilize against powerless scapegoats. It’s understandable that Cruz — or any one of us — would be tempted to take that path. It means insulating ourselves from the pain and suffering of our unfortunate neighbors by making peace with the powers and principalities that threaten us all.

Vulnerable like the Jan. 6 defendants who, more than a year later, still languish in solitary confinement. The arrestees with no clear idea when they will be tried or even what crimes they’re being charged with. The woman whose state-appointed attorney made her watch re-educational videos about racism, then apologize in court for her unAmerican thoughts.

I may be reading too much into it, but I thought I could even detect a little nervousness in Carlson during his TV spot with Cruz. I think he understood the stakes as well as Cruz did. Refusing to join the powerful during one of the greatest lie campaigns ever really could cost him his public position — as Cruz likely calculated for himself before choosing the path he did. I think it took real courage for Tucker to make the opposite choice.

As John Zmirak recently explained at The Stream, the extreme persecution of Jan. 6 protesters came amid a highly orchestrated national unleashing of violent riots, and even terrorism, all systematically left unprosecuted by Leftist-funded local officials.

As you read this, more than 100 Americans who peacefully protested the theft of the 2020 election rot as political prisoners in GITMO on the Potomac. Those who led the January 6 law-breaking and violence mostly weren’t even charged — which virtually clinches the case that they were federal informants. They ginned up violence and chaos, entrapped their fellow citizens, and quashed Republican challenges to dodgy electoral votes.

Want to know who is not going to prison, or even to trial? Leftist rioters who attempted a mass casualty terrorist attack in Los Angeles. Read this FOX News LA report on a Democrat prosecutor who, on his first day in office, dismisses a strong case against Leftist terrorists who tried to murder dozens, perhaps even hundreds, of American citizens on a commuter train. Then he retaliates professionally against an honest subordinate who tried to continue the case.

Zmirak goes on to describe how openly Kamala Harris bailed out violent attackers during the Leftist riots of 2020, while publicly cheering the violence on. The even more prominent Michelle Obama similarly threatened Americans, alluding quite clearly to the system of deep-state-funded terrorism that she apparently knew was in place: “As blue cities burned, she said that the ‘chaos’ would only get worse if Biden lost the election, so people should vote for Biden ‘like our lives depend on it.’”

So perhaps the biggest lie that overhangs the whole conversation surrounding Jan. 6 is the lie that our system of laws is operating normally and justly in the first place — and that therefore those who run afoul of today’s AGs, DAs, and DOJ must be the real criminals, while those they leave unmolested must be innocent.

“But violence ages swiftly,” wrote Alexander Solzhenitsyn in his famous letter Live Not By Lies, “a few years pass — and it is no longer sure of itself. To prop itself up, to appear decent, it will without fail call forth its ally — Lies. For violence has nothing to cover itself with but lies, and lies can only persist through violence.”

Solzhenitsyn then made a very Girardian observation: “And it is not every day and not on every shoulder that violence brings down its heavy hand: It demands of us only a submission to lies, a daily participation in deceit — and this suffices as our fealty.”

The temptation, you see, is to recognize that the violence against your neighbor — the violence that demands you submit to its lies — will likely pass you over if you only submit. Lies like calling the Jan. 6 defendants “terrorists,” based on the judgment of the deep state or the mobs on social media.

Tucker Carlson and The Girardian Path

We saw Tucker Carlson choose the Girardian path in his interview with Cruz. The senator confidently explained that some rallygoers allegedly assaulted police officers, which is all he was referring to when he spoke of a “violent terrorist attack.”

“I don’t believe you,” Carlson told the senator, calling what he said “a lie.” If someone assaults a cop, he’s simply a person who assaulted a cop: “But the person is still not a ‘terrorist.’ How many people have been charged with terrorism on Jan. 6? Why did you use that word?”

Cruz fumbled, and couldn’t give a satisfactory answer. He’d tried to join in the scapegoating of the powerless to save himself, and it may very well have cost him his career.

Carlson showed us the way in that interview. Faced with a choice between a popular, powerful senator and presidential hopeful on the one hand and the vulnerable men and women he was lying about on the other, Carlson chose to be in solidarity with the powerless.

“And therein we find, neglected by us, the simplest, the most accessible key to our liberation,” Solzhenitsyn wrote: “a personal nonparticipation in lies! Even if all is covered by lies, even if all is under their rule, let us resist in the smallest way: Let their rule hold not through me!”