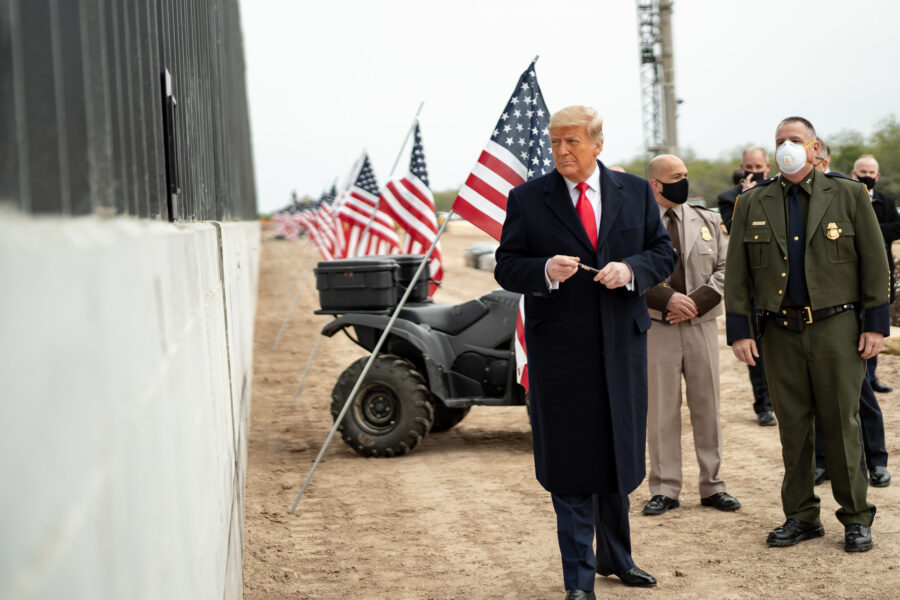 President Donald J. Trump prepares to sign a plaque placed along the border wall Tuesday, Jan. 12, 2021, at the Texas-Mexico border near Alamo, Texas.

A simple exchange between ABC’s Martha Raddatz and an illegal immigrant who made it to the US tells all you need to know about the fiasco at the border.

Raddatz: “Would you have tried to do this when Donald Trump was president?”

Raddatz: “Did you come here because Joe Biden was elected president?”

Biden Administration officials keep saying their message to would-be migrants is the “The border is closed.” DHS Secretary Alejandro Mayorkas was humming this tune on the Sunday shows.

Yet as we reported last week, the actions taken by Joe Biden and his administration blare out a far different song.

Let me give you two more examples from this weekend … along with Trump’s full statement condemning what Texas Gov. Greg Abbott calls the “humanitarian disaster” at our southern border.

Won’t Even Be Given a Court Date

In the past you’ve heard Democrats defend catch-and-release, saying the captured illegal immigrants are given a court date and ordered to appear. They’re not just released into the public to disappear forever, so the argument goes. Of course, countless illegal immigrants don’t bother showing up. The Notice to Appear is nothing but litter.

And now, according to a report, the Biden Administration is even giving up on the illusion. The border is being so flooded, a senior source with Customs and Border Protection tells Fox News, that the Rio Grande Valley Sector of CBP will begin releasing illegal immigrants who claim asylum without issuing a Notice to Appear. Meaning, they’ll be discharged without being given a date to appear in immigration court.

“The only way to end the Biden Border Crisis is for them to admit their total failure and adopt the profoundly effective, proven Trump policies.” Donald J. Trump, 45th President of the United States

The source says the situation has “become so dire” Border Patrol has “no choice but to release people nearly immediately after apprehension because there is no space to hold people even to do the necessary NTA paperwork.”

The unprecedented decision, if enacted, says Fox News, “would place the responsibility of seeking an asylum hearing on the migrants.”

“We’ll Keep the Light On For You”

If you’re wondering who’s running the White House, the answer might be Tom Bodette. While in one breath saying “don’t come,” the administration is also saying, “We’ll leave the light on for ya.”

Rather than expel illegal immigrants – or for that matter, secure the border – Joe Biden is dropping $86 million on hotel rooms near the border to provide temporary housing and processing. Axios broke the story Saturday.

The rooms are needed because housing facilities are being overwhelmed. According to Axios, the “number of migrant family members crossing the southwest border more than doubled between January and February, rising from 7,000 to 19,000, according to the most recently released agency data.”

The contract, through a Texas-based nonprofit called Endeavors is for six months. However, says Axios, the contract could be extended and expanded.

Six months. Sounds like the Biden Administration doesn’t expect to have a handle on the crisis at least until fall.

And Donald J. Trump is not pleased.

Trump Not Happy to See His Work Undone

Late Sunday afternoon, the former president released a statement via Telegram. It reads in full:

The pathetic, clueless performance of Secretary Mayorkas on the Sunday Shows today was a national disgrace.  His self-satisfied presentation — in the middle of the massive crisis he helped engineer — is yet more proof he is incapable of leading DHS. Even someone of Mayorkas’ limited abilities should understand that if you provide Catch-and-Release to the world’s illegal aliens then the whole world will come.

Furthermore, the Mayorkas Gag Order on our Nation’s heroic border agents and ICE officers should be the subject of an immediate congressional investigation.  But it’s clear they are engaged in a huge cover-up to hide just how bad things truly are.

The only way to end the Biden Border Crisis is for them to admit their total failure and adopt the profoundly effective, proven Trump policies.

They must immediately complete the wall, which can be done in a matter of weeks — they should never have stopped it.  They are causing death and human tragedy.  In addition to the obvious, drugs are pouring into our country at record levels from the Southern Border, not to mention human and sex trafficking.  This Administration’s reckless policies are enabling and encouraging crimes against humanity.  Our Country is being destroyed!