Trump Has His For-Profit University Scandal — The Clintons Have Theirs

After Bill Clinton became "honorary chancellor" of one of the most scandalous for-profit higher ed organizations, Hillary Clinton's state department funneled $55 million to it. 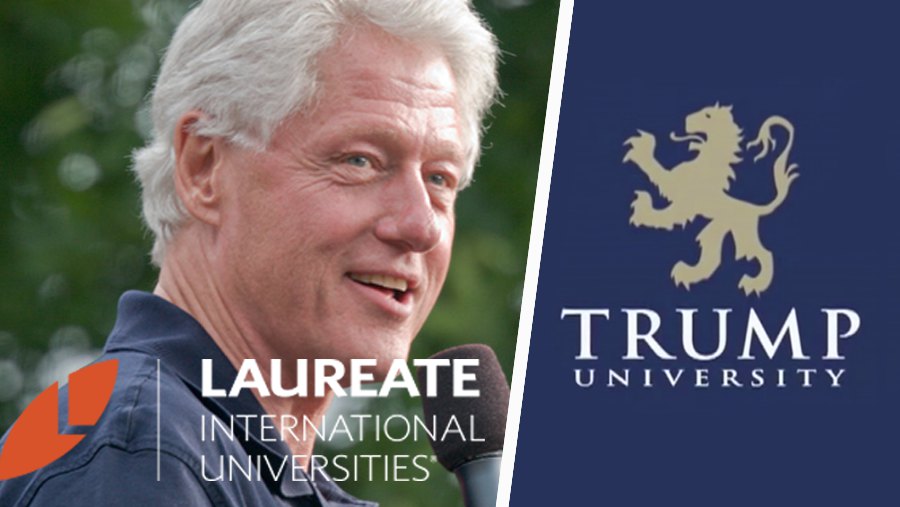 The mainstream media has been obsessed with the Trump University story. It has mostly ignored another for-profit university scandal, this one involving Bill and Hillary Clinton.

Bloomberg broke the story ten months ago, and yet the mainstream media has been notably silent about Bill and Hillary’s ties to for-profit Laureate International Universities, which benefitted from State Department contracts while Hillary was secretary of state. Laureate, the biggest for-profit school system in the country, runs 75 schools in 30 countries with 800,000 students, and has an annual income of $4 billion.

While Hillary was secretary of state, the state department funneled a reported $55 million to Laureate. The company paid Bill Clinton to be “honorary chancellor” beginning in 2010. He received over $16 million from 2010 till 2014. He left in 2015, near the beginning of his wife’s presidential campaign, at the end of what he told Bloomberg had been a five-year term.

Also, Laureate’s chairman, Douglas Becker is the chairman of a non-profit sister organization called the International Youth Foundation. “IYF received USAID funds before Hillary’s tenure at the State Dept,” Breitbart adds. “But the grants the group received exploded after Bill Clinton was put on the Laureate payroll.”

Although no one has proved a connection between the payments to Bill Clinton and the state department’s payments to Laureate, it doesn’t look good. As tax lawyer Robert C. Wood wrote in Forbes, “If you think all this is just a coincidence, you might want to invest in Whitewater.”

Another Problem for Hillary

The highly paid relationship isn’t the only possible problem for Hillary Clinton. The company that paid her husband so much money runs schools that encourage students to go into debt for graduate degrees that Forbes writer Steven Salzberg describes as offering “terrible value for the money.” He adds, “If you’ve never heard of Walden, join the club: it has no academic reputation to speak of.”

Walden and other for-profit university programs use the federal loan program, allowing graduate students to borrow up to $50,000 a year. “It turns out that many of the biggest beneficiaries of federal loan programs for graduate schools are low quality, for-profit universities that have figured out how to turn federal largesse into nice fat profits,” Salzberg writes. And number one on the list of schools whose students borrow money is Laureate’s Walden University, with their students borrowing three-quarters of a billion dollars.

In his study of the Clinton’s relation to Laureate, George Washington University professor Jonathan Turley notes, “Laureate is often cited as the leader in reducing education to a commodity in a mass for-profit enterprise.”

Worse for Clinton is Laureate’s reported sales practices. WND writer Jerome Corsi writes, “Laureate Education’s Walden University was built by inducing prospective students to incur massive tuition debt to attend a school with no academic reputation and virtually no standards for admission other than ability to pay.” The Washington Post observes, “Laureate boosts revenue at struggling colleges by turbocharging enrollment, often without a parallel increase in academic investment.” The company employs salespeople who hard sell potential students over the phone.

In his summary of the “Clinton university problem,” Turley noted other problems:

The Wall Street Journal reported that Laureate was able to “skirt” regulations on reporting “gainful employment” due to its large number of schools and students outside of the country who do not receive federal aid. The Journal noted “[o]nly 31% of students who enroll at another Laureate school, Santa Fe University of Art and Design, graduate. After 10 years, a mere 58% earn more than Americans with a high school diploma.” … MarketWatch reported “five out of its six U.S. campuses are on a list of 544 schools the Department of Education is monitoring over concerns about shaky finances or regulatory compliance.”

Some of its schools in foreign countries are not doing well. In 2013, The Washington Post reported that “Chile’s National Accreditation Commission voted to strip accreditation from one of the company’s schools, Santiago-based Universidad de Las Américas, or UDLA.” UDLA students admit its reputation has declined. “I meet people all the time who transfer here when they flunk out elsewhere,” says Arturo Bisono, 25, an agronomy major. “This has become the place you go when no one else will accept you.”

Similarly, in Brazil, “Since Laureate took over IBMR [Centro Universitário IBMR] in 2010, its quality ranking among small colleges in Brazil has dropped to 132 from 41, according to the government’s National Institute of Studies and Educational Research.”

Incredibly, Hillary Clinton says she is proposing a new plan to combat “predatory” colleges. At a campaign stop last year, she announced, “I will crack down on these for-profit colleges that are engaging in fraud and abuse of our veterans, and look for ways to hold them accountable for everybody else.”

But what about for-profit colleges hired by the State Department that pay the Secretary of State’s husband $16.5 million? What will she do about these conflicts of interest?

The Greatest Hysteria in American History