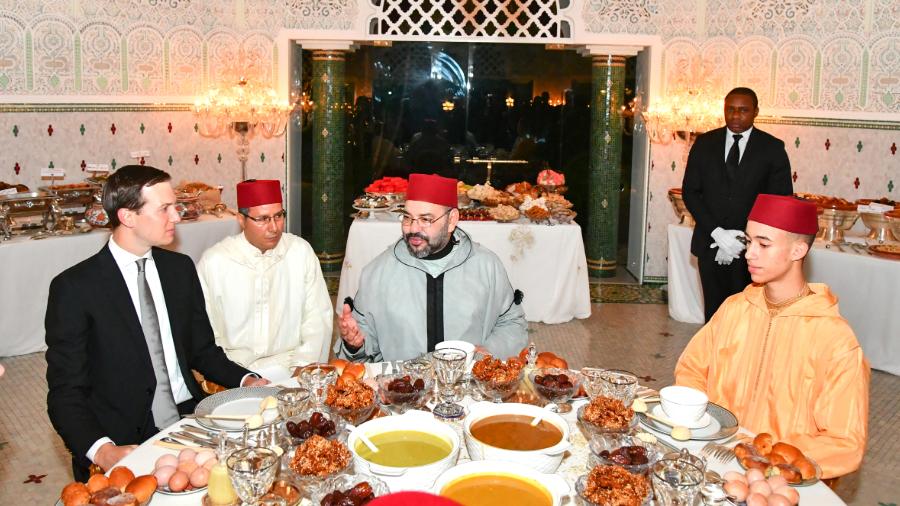 Jared Kushner, senior advisor to the president, said this deal "comes on four years of very, very hard work and diplomacy.” In this photo provided by the Moroccan News Agency (MAP), Kushner, left, prepares to have a meal in the Moroccan royal residence in Sale, Morocco, with Moroccan King Mohammed VI, center, and Crown Prince Moulay Hassan, right, May 28, 2019.

Israel and Morocco have agreed to a deal to normalize ties, President Donald Trump announced Thursday on Twitter. Morocco is the fourth Muslim-majority nation to normalize relations with Israel in four months, following United Arab Emirates, Bahrain and Sudan.

Another HISTORIC breakthrough today! Our two GREAT friends Israel and the Kingdom of Morocco have agreed to full diplomatic relations – a massive breakthrough for peace in the Middle East!

Ron Dermer, the Israeli ambassador to the U.S., celebrated the move on Twitter.

As part of the deal both countries have agreed to allow direct flights for airlines. Jared Kushner, senior advisor to the president, told reporters the nations will “reopen their liaison offices in Rabat and Tel Aviv immediately with the intention to open embassies.” He added that they will also “promote economic cooperation between Israeli and Moroccan companies.”

“This comes on four years of very, very hard work and diplomacy,” Kushner said. The Moroccan deal has been under discussion since 2017, the New York Times reported.

Trump announced this proclamation in two tweets at the same time as he announced the normalization of Israeli-Moroccan relations.

Today, I signed a proclamation recognizing Moroccan sovereignty over the Western Sahara.  Morocco's serious, credible, and realistic autonomy proposal is the ONLY basis for a just and lasting solution for enduring peace and prosperity!

Morocco recognized the United States in 1777.  It is thus fitting we recognize their sovereignty over the Western Sahara.

“A Warm Peace” That Many Palestinian Leaders Did Not Welcome

“This will be a very warm peace. On this Hanukkah, the light of peace has never shone brighter than today in the Middle East,” Netanyahu said.

Palestinians have been critical of the Abraham Accords for normalizing relations with Israel without the longstanding demand of a two-state solution to the Israeli-Palestinian conflict. Terror groups Hamas and Islamic Jihad both called the deal a “betrayal.”

“Israel and Saudi Arabia coming together and having full normalization at this point is an inevitability, but the timeframe, obviously, will come — is something that has to be worked out,” Kushner told reporters.