Why is the Trump Administration Continuing the Fight Against Nuns and Baptists? 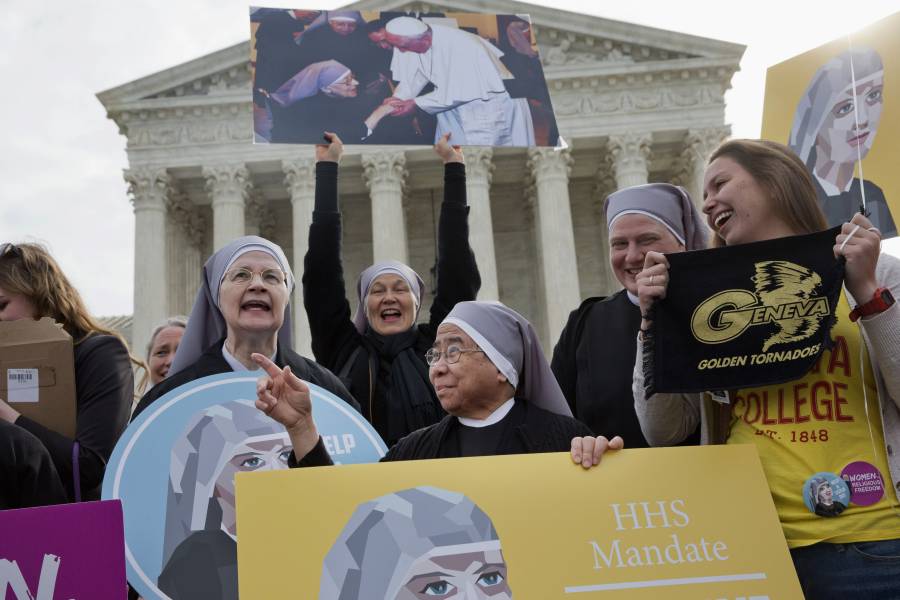 Nuns from Little Sisters of the Poor rallying outside the Supreme Court.

The Trump administration appears to be continuing Obama’s losing fight on the contraception mandate, and religious liberty advocates aren’t sure why.

This week Trump’s DOJ asked the Fifth Circuit Court of Appeals for a 60-day stay in the case with East Texas Baptist University and other religious nonprofits who object to the HHS mandate.

Last week East Texas Baptist University and other plaintiffs in the case asked the Justice Department to drop its appeal. Instead, the DOJ has asked for the stay, arguing that it needs more time to fill empty positions in federal agencies.

This means trouble for those who have sought exemption from the onerous mandate, including Little Sisters of the Poor. The Becket Fund for Religious Liberty represents the Little Sisters and East Texas Baptist University. According to Becket, the stay is unnecessary.

“We were surprised that the Justice Department asked for more time,” says Becket Fund senior attorney Lori Windham in an interview with The Stream. “There’s a very simple solution here: they could simply dismiss their appeal. But they’re refusing to do that and we’d like to know why.”

What Is Trump’s DOJ Trying to Accomplish Here?

So far the only information from the Trump administration is what the Justice Department told the Court, that they need more time to get their nominees in place. The DOJ’s move is all the more surprising in light of President Trump’s campaign promise to protect religious liberty, which explicitly mentioned Little Sisters of the Poor.

For East Texas Baptist University, Houston Baptist University, and other plaintiffs bundled in the Fifth Circuit decision, the solution is simple. Because they won their case in the lower court, the only action the government needs to take is to drop the appeal. The cessation of hostilities would bring instant relief to all parties involved, including the Justice Department.

For Little Sisters of the Poor, it’s “procedurally more complicated,” Windham explained. “We told the court that we should be able to move forward, and the Justice Department still asked for more time.”

For Little Sisters as a Legislator, Against Them as HHS Secretary

Adding intrigue to the story is the new Secretary of Health and Human Services, Tom Price. Price already told the Supreme Court that the Little Sisters of the Poor should win their case. In January of last year, Price signed on to an amicus brief as a U.S. representative fighting for religious liberty. This week Secretary Price is in charge of the department that is still continuing these appeals in the suit against the Little Sisters of the Poor.

“I don’t know that there’s anything normal about this situation,” Windham said. “This issue has been up at the Supreme Court five times, and the government has lost five times. I would think they’d be in a hurry to dismiss these appeals.”

Meanwhile the religious liberty cases for East Texas Baptist University and Little Sisters of the Poor are on hold. These religious groups (many of them Christian) “don’t want this fight,” Windham explains. “They want to get back to educating students and serving the poor.”

So why is the Trump administration continuing a fight where everyone loses?