The Trainwreck That is Kyrsten Sinema 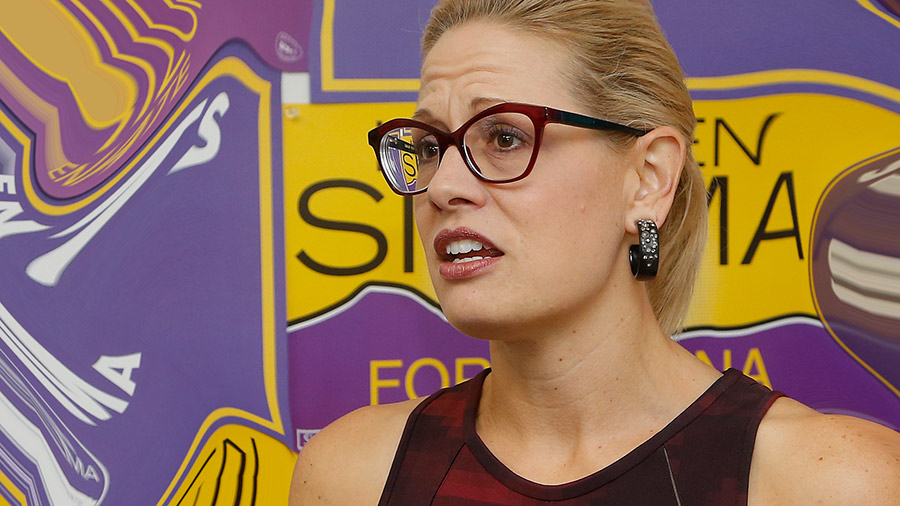 Democratic U.S. Representative Kyrsten Sinema is running for U.S. Senate in Arizona. At first, she seemed to be taking the lead over her GOP opponent, former combat pilot Martha McSally. Sinema bought millions of dollars in TV ads portraying herself as a moderate. She emphasized the three years she spent homeless as a child (except she never was).

But her radical past is finally catching up with her. I covered some of it here previously for The Stream. But since my article was published, more of her disturbing background has come out. As a result, she is now losing ground in polling to McSally. The Arizona State Troopers Association just pulled its endorsement of her.

Let’s look at what more we’ve learned about her.

In 2002, the former communist said it would be “inappropriate” to condemn the destruction of property by anarchists. At the time, she was working as a community organizer for the Arizona Alliance for Peaceful Justice. “When AAPJ attended May Day (sponsored by the Phoenix Anarchist Coalition), we knew that their guidelines differ from ours,” Sinema wrote in an email. “They are okay with weapons and property destruction in some instances. And so those of us who chose to attend the event knew that it would be inappropriate to ask someone to not destroy property or to carry a weapon.”

In 2003, she told a radio talkshow host that it was “fine” if the host wanted to join the Taliban.

In 2003, she told a radio talkshow host that it was “fine” if the host wanted to join the Taliban. When McSally heard about this, she called it treason. “I was getting shot at by the Taliban,” McSally said. “This is, like, really, really personal to me to make a remark like that that says it’s OK for an American to actually join their ranks when they’re responsible for killing Americans. I believe it’s disqualifying for a Senate candidate to say, at any time in their life, it’s OK for Americans to go join our enemy.”

Promoted an Accessory to Terrorism

In 2003, Sinema promoted college campus appearances by Lynne Stewart, a radical lawyer. ASinema co-founded the group Local to Global Justice, and through it invited people in a Yahoo group to two events with Stewart.

The problem? At the time, Stewart was under prosecution for providing material support to terrorism. Prosecutors charged Stewart with helping her former client Omar Abdel Rahman, a radical Egyptian spiritual leader of a terror group, pass on secret messages to his followers to commit terror attacks. A judge sentenced Rahman to life in the 1990s. He plotted to blow up the U.N., an FBI building, two tunnels and a bridge in New York City.

In one of her invitations, Sinema declared Stewart “emphatically not guilty.” She said she would not have been charged with the crime if it weren’t for “the hastily enacted PATRIOT Act.” A judge initially sentenced Stewart to 28 months in prison. But in 2010, a judge resentenced her again to 10 years behind bars.

In March of 2003, Sinema invited a prominent coven of feminist witches in Arizona called Pagan Cluster to celebrate International Women’s Day and to protest the war. She told the witches to wear “colorful clothing and come ready to dance, twirl, and stay in touch with your inner creativity and with the Earth.”

In March of 2003, Sinema invited a prominent coven of feminist witches in Arizona called Pagan Cluster to celebrate International Women’s Day and to protest the war.

Seven years ago, Sinema, who once referred to mothers who stay at home as “leeches,” labeled the GOP elected officials running the state at as “crazy.” This was partially in reference to efforts being taken to crack down on illegal immigration, such as SB1070. She told the Texas Stonewall Democrats, “Over the past several years, people have watched what was happening in Arizona, and been like, ‘D***, those people are crazy,'” Sinema said. She warned them to “stop your state from becoming Arizona.”

Sinema said she remembered learning a song about Arizona’s famous Five C’s when she was a child: copper, cattle, cotton, citrus and climate. “But I would add a sixth C,” she said. “It’s called ‘crazy,’ because that’s what’s happening in my state, is pure craziness. Pure craziness.”

Torunn Sinclair, McSally’s spokeswoman, said the statements show Sinema is not fit to serve in the U.S. Senate. “Arizonans want a senator who is going to have their back, not call them crazy,” Sinclair said.

Sahil Kapur writing at Bloomberg Quint says this is the best chance Democrats have had in 30 years to turn Arizona blue. While he may have been right a few weeks ago, the situation has since changed. The intense media scrutiny of Sinema’s past has destroyed her lead. Nearly 45.7 percent of state early ballots returned so far are GOP voters. Only 31.4 percent make up Democratic voters. Early results don’t look good for Sinema.