Our church leaders are complicit in the vaccine industry's abuse of stolen baby organs. 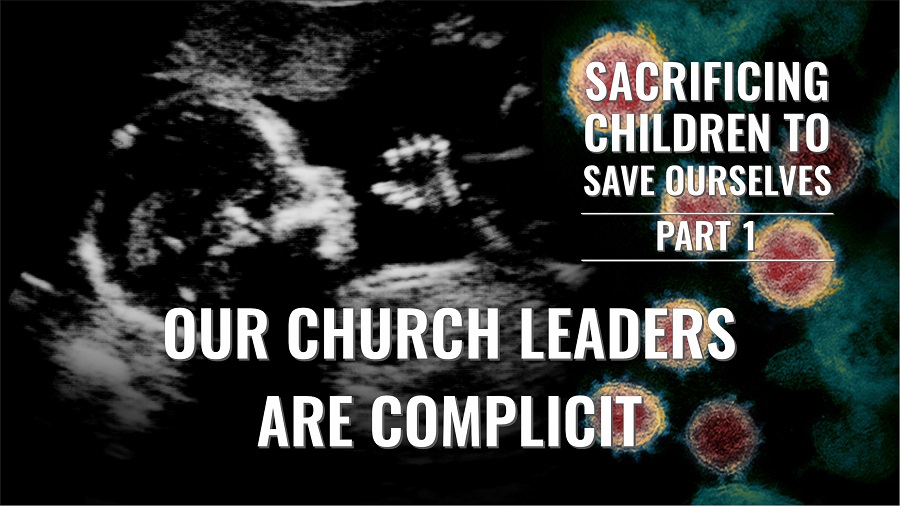 For decades, biomedical researchers have attempted to harness the staggering power of stem cells taken from tiny unborn humans. They use them, among other things, to grow viruses, model disease and test vaccines and drugs. (For instance, every approved COVID vaccine relied on fetal tissue either in production or in testing.) Fresh fetal tissue is most prized of all because of its pluripotent capacity, adaptability and ability to multiply rapidly. Of course, cutting open unborn babies and taking their organs amounts to human sacrifice, as any decent person (much less Christian) must admit.

Remember the explosive undercover videos produced in 2014 by David Daleiden and the Center for Medical Progress? Most of us are now aware of the grisly background of fetal research. Daleiden’s shocking videos and subsequent reporting forced us to face it. With NIH funding, scientists take babies removed alive from the womb and dissect them without anesthetic. That’s how scientists harvest the most optimal tissue for research. Furthermore, Daleiden provided graphic documentation on the sinister network between Planned Parenthood’s abortion mills, its primary organ trafficking partner, Advanced Bioscience Resources, located in Alameda, California, and government researchers.

The Catholic Church, almost alone among world institutions, long resisted the push for fetal research. In 1995, in his encyclical Evangelium Vitae, Pope St. John Paul II solemnly invoked his full authority as Pope and condemned abortion as a “grave moral disorder.” He extended that solemn condemnation to experimentation on embryos and the use of “biological material” procured from embryos or fetuses, “even if to help others.” He called such abuse of human organs “an absolutely unacceptable act.”

The approved COVID-19 vaccines each were tested with the use of the human embryonic kidney stem cell line HEK293. That’s Human Embryonic Kidney 293, but the girl who was removed from the womb alive and dissected has a name: Johanna Vera Alderliesten.

Betrayed by Churchmen in League with Caesar

The current Vatican has failed to carry on Pope John Paul II’s firm stance against benefiting from child sacrifice, adopting a crass utilitarian stance that Christians must reject. Some five bishops dissented, reasserting the ancient, apostolic, universal Christian rejection of abortion. As they wrote on December 12, 2020:

The crime of abortion is so monstrous that any kind of concatenation with this crime, even a very remote one, is immoral and cannot be accepted under any circumstances by a Catholic once he has become fully aware of it.

In April, 2020, Bishop Athanasius Schneider explained how the abortion-derived vaccines are the end of a chain of crimes:

The first crime is to have killed a child. The second is to have used and processed these cell lines. To then use these cell lines for testing is yet another crime. We cannot collaborate in this accumulation of crimes and we cannot benefit in any way from their ‘by-products.’

The Law Writ on Our Hearts

The remarkable fact is that millions of people in America and other countries have instinctively resisted the fetal tissue-infused COVID-19 vaccines. Many are experiencing dire punitive measures because of their pro-life witness, including harassment and persecution by employers and fellow employees, and the loss of jobs and status. Even priests and seminarians are suffering at the hands of their bishops.

These pro-life Christians are making enormous personal sacrifices rather than cooperate in any way with the murder and torture of one small unborn female child in the 1970’s. How much more fortified and vindicated will they be in their opposition if they knew that hundreds more aborted babies have been and are now being exploited in the same fashion in the research and development of COVID-19 vaccines and therapeutics? This isn’t like using a vaccine made from Anne Frank, in a Holocaust that ended. It’s like using such a vaccine if the Nazi camps were still up and running.

This ongoing, five-part series commissioned by The Stream (find them all here) will explore the many, many ways in which Big Pharma, universities, and the U.S. government collude with abortion profiteers to exploit the death of the innocent. I hope that this information will strengthen Christians in making the right decision — to reject such cooperation in an ongoing, grievous crime that calls out to heaven for vengeance.

To Save Ourselves From COVID, We’re Sacrificing Children, Part 2: “Humanized” Mice and the Birth of COVID