Three Wise Men: How a Military Family Kept the Faith 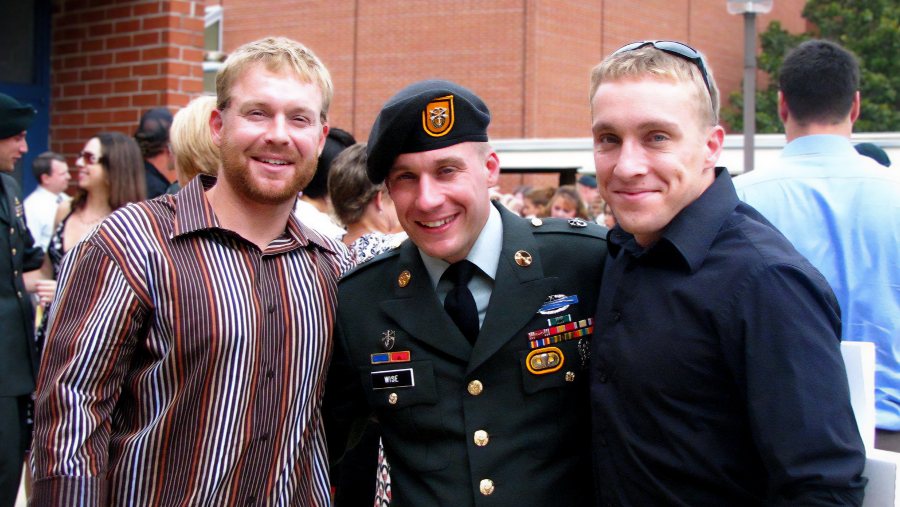 As I think about my co-author and friend Beau Wise, a combat veteran who’s also the only U.S. military service member in American history to lose two brothers in Afghanistan, 2 Timothy 4:7 comes to mind.

“I have fought the good fight, I have finished the race, I have kept the faith.”

Very few military families — particularly in the past 50 years — have been forced to endure the suffering that the Wises have experienced. The tragic sequence of events began to unfold on December 30, 2009, when U.S. Navy SEAL-turned-CIA contractor Jeremy Wise was killed in an al-Qaeda suicide bombing. After being told that his oldest brother had been killed, U.S. Marine Beau Wise flew home from his own Afghanistan deployment to meet his grieving parents, sister and only surviving brother, U.S. Army Green Beret Beau Wise.

In the below video, Beau vividly speaks about a heartfelt conversation he had with Ben as they rode to the cemetery to bury their fallen brother.

Just over two years later, Beau once again found himself riding in a limousine bound for the same cemetery. This time, it was to bury Ben, who was severely wounded during a fierce January 9, 2012, firefight with the Taliban. He died six days later in Germany. Beau and Ben’s wife Traci were at the military hero’s side when God decided it was time for Ben to join Jeremy in heaven.

Left behind were Ben’s wife, children, parents, sister and of course, Beau. While his first instinct was to get back to Afghanistan as soon as possible to fight the enemies who killed his brothers, the Pentagon quickly put an end to Beau’s plans. As Ben’s flag-draped casket returned to Dover Air Force Base in Delaware, the Commandant of the Marine Corps knelt down and promised Beau’s grieving mother, Mary Wise, that she would never again have to say goodbye to a son bound for battle.

Beau and I talked a lot about that moment as we wrote our book Three Wise Men, which will be published in paperback on Tuesday, April 5. Instead of feeling a sense of relief, Beau was anguished and angry after learning that his career as a U.S. Marine infantryman was essentially over. He would stay in the military for a few more years, but working as a base clerk was a lot different than fighting terrorists. Beau also felt that after already losing two members of his family, he had been robbed of spending more time with his second family: the United States Marine Corps. While Beau kept in touch with his battle buddies, it just wasn’t the same as serving side-by-side in a war zone.

Sharing His Story for Others

In Three Wise Men, Beau bravely revealed his struggles with alcohol, depression and contemplating suicide. While he was understandably hesitant to put these previously private details on paper, Beau ultimately decided to do so because he felt a responsibility to help his fellow veterans. Almost every time Beau has been interviewed since our book was first released, he has encouraged veterans and those around them to talk to each other. Struggling in silence with the demons of war can be damaging, and – in far too many tragic cases – deadly.

One of the most inspirational things about Beau, his mother, late father, sister and other members of the Wise family is their unshakeable faith in God. Had two family members of mine had been killed in less than three years, I would probably be screaming at God instead of praying to Him. For Beau, the Lord is a source of comfort who is always willing to listen.

Something remarkable that Beau and I learned while researching Three Wise Men was that while serving in one of the world’s most violent and perilous places, Ben and his close friend Kevin Flike organized Bible study classes for their fellow Green Berets. Many of the emails and text messages that were graciously shared with us by Ben’s widow were full of faithful language as well. Even while deployed to a cold, desolate and seemingly hopeless part of the world, Ben’s relationship with God was never stronger than during his fourth and final combat deployment.

“Saint Michael the Archangel, defend us in battle,” Ben and Kevin would often pray before heading into battle. “Be our defense against the wickedness and snares of the devil. May God rebuke him, we humbly pray, and do though, O prince of the heavenly hosts, by the power of God., thrust into hell Satan, and all the evil spirits, who prowl about the world seeking the ruin of souls. Amen.”

Kevin was himself severely wounded in a firefight about three months before his fellow prayer warrior Ben made the ultimate sacrifice. Today, that friendship lives on through Beau, who will soon travel to Boston with Kevin to attend a military charity event. Kevin and Beau’s friendship has inspired me to make sure I stay in close touch with my own circle of friends and family. Time is truly precious and you never know how many more days you’ll have with those who care about you most.

While his race is far from over, Beau Wise has indeed fought the good fight and perhaps most importantly, kept the faith. For my part, I will always be thankful that heroes such as Jeremy and Ben Wise lived and were willing to sacrifice everything to keep our country safe. I am also eternally grateful that God saw fit to connect me with Beau and his extraordinary family to collaborate on Three Wise Men. Because of selfless, compassionate and faithful families like the Wises, we are free.