Three Ways The Atlantic’s Attack is Wrong About the Rosary 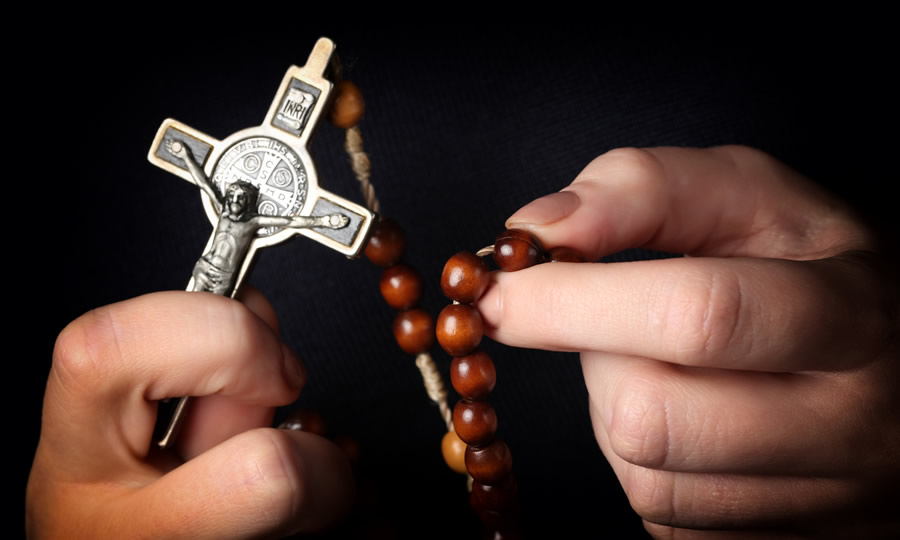 Citing how radical Muslims often quote the Koran to justify their violence, in a bold but much-needed move, The Atlantic published an article connecting Islam’s holy book to the rise of Muslim extremism.

Of course, nothing of the sort happened. Rather, in “How the Rosary Became an Extremist Symbol,” Atlantic contributor, Daniel Panneton bemoaned how, in “right wing” hands, the Catholic rosary has become “anything but holy.” He especially warned against so-called “radical-traditional Catholics”:

Their social-media pages are saturated with images of rosaries draped over firearms, warriors in prayer, Deus Vult (“God wills it”) crusader memes, and exhortations for men to rise up and become Church Militants.

Panneton gets it wrong — very wrong — for three reasons.

Love the Sinner — Outlaw and Combat the Sin

First, he suggests that “true” Catholics must always eschew militancy: “Catholics,” he writes, “are taught to love and forgive their enemies, that to do otherwise is a sin.”

This is only true on an individual level. On a state level, law and order — not love and forgiveness — must reign supreme. This is why St. Paul called on Christians to pray “for kings and those in authority,” so they might create an environment whereby Christians “may lead peaceable and quiet lives” (1 Tim. 2:2). In short, love the sinner, hate — outlaw and combat — the sin.

Enter Just War theory. While often seen as a product of Catholic thinking (particularly Saint Augustine’s), it actually traces back to Christ, who differentiated between the social and spiritual realms (Matt. 22:21). In the only recorded instance of his being slapped, Jesus did not “turn the other cheek,” but rather challenged his slapper to explain himself (John 18:22–23). Christ further praised a Roman centurion without calling on him to “repent” by resigning from one of the most brutal militaries in world history (Matt. 8:5–13).

Accordingly, Catholics never had a problem defending the faith against anything perceived to undermine it. For example, my new book, Defenders of the West: The Christian Heroes Who Stood Against Islam, highlights the lives of eight men — seven Catholic — who fused piety and militancy in ways that would make the “right wing” Christians The Atlantic so fears seem like boy scouts. Many of these heroes carried the rosary into the bloody fields of battle, and many sacrificed their lives — though they were kings, lords, and nobles, who had much to live for — fighting in defense of Christianity.

Fighting on Behalf of What is Right

Panneton also gets it wrong by implying that Evangelicals are “falling in for” Catholic militancy:

This is unsurprising. Whatever their theological differences, fighting for and on behalf of what is right has, unlike what The Atlantic would have its readers believe, always been a Christian prerogative. After writing that those who insist that Christian militancy is a betrayal of authentic Christian teaching, eminent Crusades historian Jonathan Riley-Smith wrote: “underlying their opinions is the belief that the crusading movement was an aberration, a departure from the norm in Christian history. This is wish-fulfillment, stemming from a desire to reshape the past of one’s religion into a more acceptable form.”

Riley-Smith went on to write that, until recently, “most Christians — Catholic, Orthodox, Protestant — had in general no problem with the idea of holy war.” Little wonder, then, that Catholics and Protestants are becoming natural allies in their battle to, for example, save the unborn, or shield their children from degeneracy and depravity.

The third, and probably most insidious, way that Panneton gets it wrong is by playing theologian and allowing for “Christian militancy,” but only and always in a “spiritual” — that is, abstract or symbolic — sense. After complaining about how “armed radical traditionalists have taken up a spiritual notion that the rosary can be a weapon in the fight against evil and turned it into something dangerously literal,” he writes:

The ‘battle beads’ [rosary] culture of spiritual warfare permits radical-traditional Catholics literally to demonize their political opponents and regard the use of armed force against them as sanctified. The sacramental rosary isn’t just a spiritual weapon but one that comes with physical ammunition.

Yes, Christianity very much promotes spiritual warfare. Missing, however, is what Christians used to know: that spiritual wickedness, left unchecked, manifests into physical wickedness — Satan’s ultimate win — and that both must, therefore, be combatted.

During, for example, their long wars against Muslim invaders, Christian Defenders regularly saw the diabolical in the actions of their foes, including the Islamic desecration of sacraments, crosses, Christian statues, and churches — to say nothing of the sexual enslavement of Christian (“infidel”) women and children. For these men, fighting the jihad was one with fighting Satan.

The real question, therefore, isn’t whether Catholics and Christians in general are permitted to turn to militancy, but rather, has the negative spiritual energy currently and openly subverting the United States finally become so manifest as to warrant physical resistance?

It would seem that people like Panneton and The Atlantic think so — and thus are doing their best to pretend that “good” Catholics and Christians in general never, under any circumstance, turn to militancy, but rather remain doormats, forever “turning the other cheek,” while wickedness runs rampant, which is precisely what has been going on over the last few decades.