Three Sick Responses to the Murder of an Israeli Policewoman 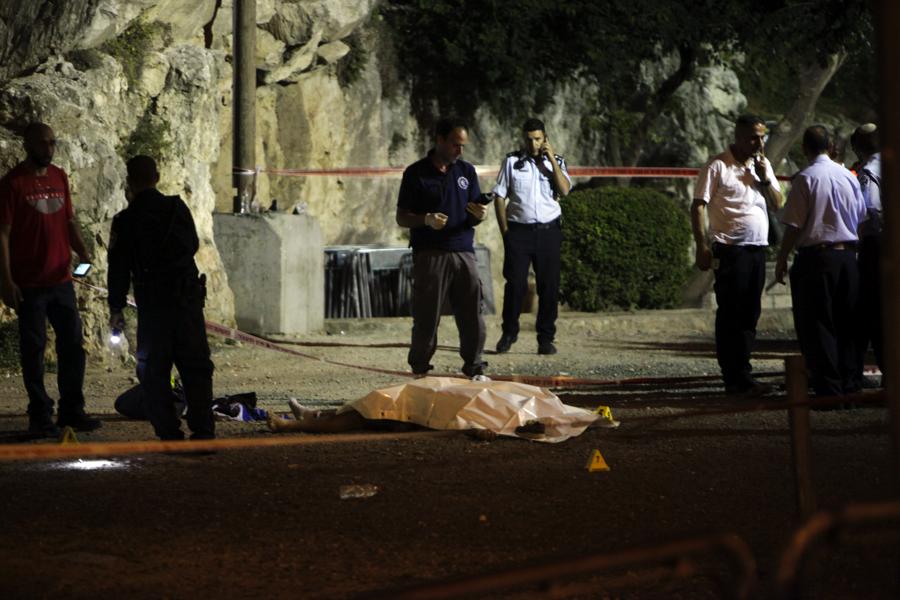 Israeli police stand around a body of a Palestinian in Jerusalem, Friday, June 16, 2017. Three Palestinians armed with an automatic weapon and knives attacked Israeli officers on duty near Jerusalem's Old City in twin attacks at two locations Friday evening, critically wounding one before they were shot and killed. Police officer critically wounded died of her wounds.

JERUSALEM — How did the BBC, Hamas and the Palestinian Authority respond to the premeditated, terrorist murder of a 23-year-old Israeli policewoman? The answer is: true to form.

The BBC has a long history of biased, anti-Israel (and even anti-Semitic) reporting, as documented on BBCWatch.org and other sites. The bias is commonly seen in BBC’s headlines.

For example, in 2013, Labour’s Lord Ahmed “was suspended for claiming that Jews were responsible for his imprisonment after driving offences.” How did the BBC report this? “Labour peer Lord Ahmed suspended after ‘Jewish claims.’” What in the world are “Jewish claims”?

As one reader commented, “There were no ‘Jewish claims’ – it was antisemitism.”

Why, then, didn’t the BBC properly identify this as “anti-Semitism”? The word, they explained, is “too long”!

More commonly, BBC headlines mislead the reader in terms of guilt and responsibility. Compare these two headlines, one when a Palestinian is killed by Israeli soldiers and the other when an Israeli is killed Palestinian terrorists. The headlines are: “Israeli attack kills baby girl” vs. “Israeli baby killed by gunfire.”

In the former, Israel is to blame; in the latter, it is just “gunfire” that is to blame. How the gun was fired and who fired it is a mystery.

Other acts of Palestinian terrorism have been reported with headlines like this: “Bomb stokes Mid-East tension.”

Yes, just a generic bomb that somehow went off. Those bombs can be so independent and nasty.

BBC on the Murder of Israeli Policewoman

How, then, did the BBC report the terrorist slaying of this young Israeli policewoman? Brace yourself. It’s as ugly as it gets for a major news outlet like the BBC. The headline read, “Three Palestinians killed after deadly stabbing in Jerusalem.” That is outrageous.

BBC’s apology was too little too late: “We accept that our original headline did not appropriately reflect the nature of the events and subsequently changed it. Whilst there was no intention to mislead our audiences, we regret any offense caused.”

Hamas Reacts to the Murder

Hamas reminded us that its anti-Israel hatred is as deep as ever, despite recent claims that it had softened its tone. Prime Minister Netanyahu literally threw such claims into the trash can last month.

Like the BBC, Hamas is consistent. In April, Hamas hailed the vehicular ramming attack that killed one Israeli and wounded another. “We bless this heroic ramming attack at the Ofra intersection near Ramallah, which is a response to the continued crimes of the Zionist occupation at the expense of our people,” said Hamas spokesman Abdul-Latif Qanou.

Now, both Hamas and ISIS are claiming responsibility for Friday’s murder. (Heaven forbid that ISIS gets the credit for such a good kill.) A Hamas spokesman described the killers as “three hero martyrs.” Yes, three hero martyrs who attacked Israelis before the Sabbath, wounding one and stabbing the other to death. How heroic.

Palestinian Authority is Outraged … That the Terrorists Were Killed

As for the Palestinian Authority, Israel’s supposed peace partner, they too have proven true to form.

It has often been documented that the PA names children’s schools and city squares after mass-murdering terrorists. And the fact that the PA pays the salaries of imprisoned terrorists is a point of contention now with the Trump administration.

So how did Fatah, the PA’s political faction, respond to Friday’s terrorist attack? It condemned Israel for killing the terrorists, calling it a “war crime”! Here’s the official statement from spokesperson Osama al- Kawasm: Fatah “condemns the war crime carried out by Israeli occupation forces in Jerusalem against three Palestinian teens.” (The terrorists were 17, 18, and 19.) Fatah added that “the international community’s silence emboldened Israel to further spill the blood of Palestinians.”

Yes, those evil Israelis did it again. They, and they alone bear the guilt.

And so, as a beautiful young woman named Hadas Malka succumbed to multiple stabbing wounds, the BBC misreported the murder, Hamas praised it, and Fatah condemned Israel for killing the young murderers. Do you see now why I described their responses as “sick”?

In reality, the responses of Hamas and Fatah in particular only provoke further bloodshed, thereby bereaving the families of both Palestinians and Israelis. This is beyond sick.

The Evil of Hamas and the Weakness of the UN