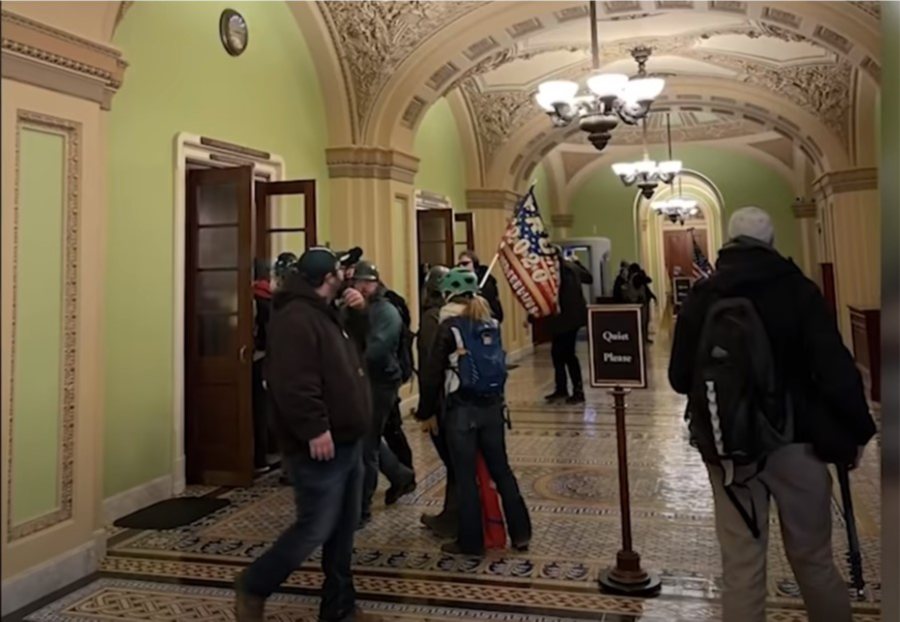 The most devastating section of an already brutal novel, 1984, doesn’t come when Winston Smith gets arrested. That always seemed inevitable. Nor even when he and his secret lover, Julia, betray each other under torture. In that novel’s godless world, we expect torture to triumph.

No, I think the evil depicted in that novel of tyranny hits bottom when the regime’s inquisitor O’Brien casually admits something to Winston. The underground resistance group, “The Brotherhood,” which O’Brien had entrapped Winston into joining … might not even exist. It might consist entirely of government provocateurs, double agents, and snitches.

In the perfect tyranny which the Ingsoc Party is building, there will be no real resistance groups, however small and powerless. Nobody may be allowed even to gather uselessly and nurse his grievances. No solidarity, friendship, support or fellow-feeling may be permitted outside the Party. Every glimpse or hint of an alternate path — not even to power, but to human company and fellowship — must in fact prove a cruel snare, a vicious trap, which lands its victims in prison.

Liz Cheney and the Ministry of Love

Welcome to the America of Rep. Liz Cheney. And Rep. Adam Kinzinger, and every other member of the January 6 committee. That’s also the America our own FBI is striving to build.

It’s a constant challenge for a would-be free country to maintain a secret police, and try to keep it firmly under control. That usually fails to some degree, and you see members of that force usurping power and mistreating citizens. Yes, J. Edgar Hoover did surveil, and try to blackmail or destroy Rev. Martin Luther King, Jr. But that’s only the most infamous case of federal abuse of intelligence.

In the wake of 9/11, the FBI infiltrated mosques, inserted spooks, and actively tried to recruit religious Muslims to join in acts of terrorism. Note the order of events: The FBI didn’t hear about existing terror plots, and try to penetrate them with agents, to stop them from harming people.

No, on multiple occasions it sent agents to find and recruit people who’d shown no criminal intent before. Then attached them to plots which the FBI had invented, and sent them to prison. Typically, the FBI agent provocateur doesn’t succeed in catching dedicated radicals. Just hapless losers and drifters, socially marginal males who if left alone would never have harmed a soul. Those are the kind of men — lonely and easily led — who tend to fall for the grandiose schemes of duplicitous snitches.

The FBI had already practiced this kind of incitement among anti-war student radicals in the late 1960s, with agents pushing activists to move from protest to violence. Revolver News cites five times the FBI employed informers to incite and advance terrorist schemes — endangering U.S. citizens in order to entrap potential radicals. Here are just the two most appalling:

We Were the Next Targets

Now maybe we don’t care that much about members of radical mosques. But the law is supposed to protect our enemies as well as our friends. If we let lawless lawmen employ entrapment, and get in the habit, they will wield it against us too, should the winds of power shift.

And so they have. In fact, evidence is mounting that both of the alleged instances of right-wing “domestic terror” that the left cites constantly to excuse silencing and persecuting conservatives were FBI operations from beginning to end.

Buzzfeed News, not a conservative outlet, helped expose the origins of the so-called “right-wing” plot to kidnap Michigan Governor Gretchen Whitmer, and “try” her for treason. (This after she unconstitutionally seized power to rule by decree using COVID as a pretext — only to be stripped of those powers by judges later.)

As the number of FBI infiltrators exposed has come to outnumber the actual defendants in the trial, it’s also becoming clear that the FBI might have come up with the whole kidnapping plot in the first place. Then it trolled society’s fringes, to recruit people whom it could entrap and send to prison. Buzzfeed reports:

some of those informants, acting under the direction of the FBI, played a far larger role than has previously been reported. Working in secret, they did more than just passively observe and report on the actions of the suspects. Instead, they had a hand in nearly every aspect of the alleged plot, starting with its inception. The extent of their involvement raises questions as to whether there would have even been a conspiracy without them. [emphasis added]

A longtime government informant from Wisconsin, for example, helped organize a series of meetings around the country where many of the alleged plotters first met one another and the earliest notions of a plan took root, some of those people say. The Wisconsin informant even paid for some hotel rooms and food as an incentive to get people to come.

The Iraq War vet, for his part, became so deeply enmeshed in a Michigan militant group that he rose to become its second-in-command, encouraging members to collaborate with other potential suspects and paying for their transportation to meetings. He prodded the alleged mastermind of the kidnapping plot to advance his plan, then baited the trap that led to the arrest.

Buzzfeed also noted: “Less than a decade ago, for example, an apocalyptic Christian group in Michigan was prosecuted for allegedly plotting to murder police officers. Among other things, the defendants claimed that the entire conspiracy was instigated by deeply embedded FBI informants, and the defendants were ultimately acquitted by the judge.”

The Feds Planned Their Own “Insurrection”

Now we see mounting evidence that any serious illegalities committed on January 6 were likely instigated by FBI infiltrators or informants. Leave aside the dozens of demonstrators who wandered into the Capitol, unaware of a police lockdown. They sauntered past smiling cops, not even realizing that they were breaking the law. These are simple victims of Anarcho-Tyranny, persecuted by Democrats who shrugged at the burning of cities a few months before.

There was a very small core of militia-type, right-wing dissidents. Some believed that they were coming to Washington to serve as an armed force to help Donald Trump reverse a stolen election. They would gather and wait for him to invoke the Insurrection Act, then volunteer as his “deputies.” Yes, that’s a crackpot, crazy idea. It sounds like something that would only come from an FBI informant, or “Fed.” And it seems that’s exactly where the idea really did come from.

You Don’t Send Your Snitches to Prison

The leading figure, cited in dozens of indictments, in this “militia” operation was “Oath Keepers” leader Stewart Rhodes. He gave all the orders. He’d launched the plan. And he’s one of the only major figures from January 6 who hasn’t been indicted. All his friends and associates are languishing in solitary. But Rhodes walks free.

As Revolver News asks, if he isn’t a Fed who entrapped the other defendants, why is that? The January 6 committee has subpoenaed Steve Bannon, dozens of other private citizens, and thousands of bank and telephone records. Why doesn’t it want to hear from Stewart Rhodes?

The Fed Who Led the Breach

Another of the ringleaders, who instigated the aggressive intrusion of protestors past locked doors and obvious police lines, was Ray Epps. In a recent column here at The Stream, Gov. Mike Huckabee cited another Revolver report about Epps’ secret agenda:

… Epps was insistent that everyone stay focused on a common mission: storming the Capitol. On multiple livestreams, Epps moves from group to group throughout the plaza barging in and insisting everyone ‘stay focused’ on ‘what we’re here for’ — which he would then explain meant going inside the U.S. Capitol building. When asked to give a reason for his crazy plot, Epps would continually fall back on his catch-all rationale: ‘It’s about the Constitution.’

People in a couple of the groups he gave his little pep talk to even suggested that he might be “a Fed.”

You’d think that if the FBI were rounding up suspects to hold them for many months without bail, essentially as political prisoners, one person very close to the top of their list, if not the top, would be this guy. But no. They had him on their “most wanted” list for a while, but when Revolver News came out with their first big story, he was dropped off the list.

Many, many more questions need to be asked, and answered. They won’t be by the politically purged Stalinist show-trial tribunal Rep. Nancy Pelosi convened, with the help of NeverTrump Republicans.

But Americans need to wonder: Has the FBI gone into the business of helping the political party in power, by infiltrating and entrapping its opponents? That’s how the East German Stasi used to operate. And of course, the Ministry of Love in the novel 1984.