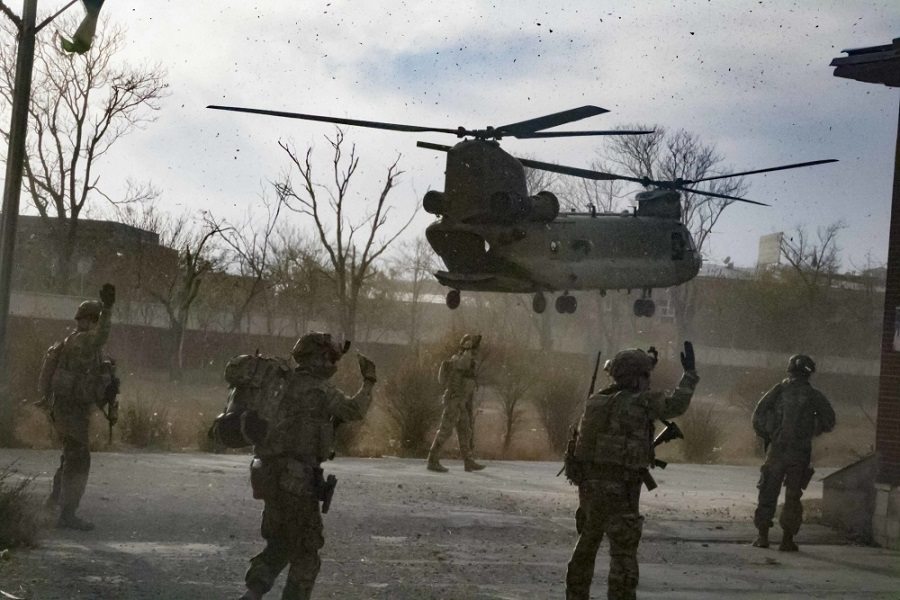 U.S. Army soldiers prepare to head back to their base following a key leader engagement meeting in southeastern Afghanistan on November 11, 2019.

On Thursday, the Department of Defense announced that two brave soldiers were killed in Afghanistan’s Logar Province “when their helicopter crashed while providing security for troops on the ground.” The terrible tragedy is being investigated by the Pentagon.

U.S. Army Chief Warrant Officer 2 David C. Knadle, 33, is from Tarrant, Texas. Chief Warrant Officer 2 Kirk T. Fuchigami Jr., 25, is from Keaau, Hawaii. The Fort Hood, Texas-based soldiers undoubtedly leave behind legions of loved ones, friends, fellow soldiers and folks whose lives were touched by these selfless protectors. The scope of losing a family member or friend to combat is not only permanent, but unimaginably staggering.

It deeply angers me that CNN, Fox News, MSNBC and many other “news” outlets don’t think the ultimate sacrifices made by these warriors warrant one one-thousandth of the coverage being devoted to the pathetic political circus taking place on Capitol Hill. These fallen heroes weren’t partisans; they were patriots. I, for one, will remember them more than anything said this week in Washington. I hope you will join me in setting an example for our nation’s younger generation about what truly matters.

In the coming days, we will learn more about the lives and legacies of these fallen soldiers as they return to the country they died defending inside flag-draped caskets. As America’s newest Gold Star families make their painful journeys to Dover, Delaware, please also join me in praying for them. We ask a merciful Lord to somehow comfort their broken hearts.

To the many journalists who are virtually ignoring this important story: You should be ashamed of yourselves.

Hundreds of valiant U.S. service members are also risking their lives in Iraq, Syria and other dangerous places. As they do so, fears are mounting that some of the world’s most vicious murderers and terrorists are planning prison breaks on a massive scale.

As Jason Lemon reports for Newsweek, Iraq’s military intelligence chief said this week that his country has “concluded that the real intention of ISIS is to begin a mission they’re calling ‘break down the fences,’ to storm jails inside Iraq and Syria, to free terrorists.” He warned of severe consequences for the Middle East, Europe, Africa and Asia. As Americans learned on September 11, 2001, what happens over there can have severe consequences inside our country, too.

Please pray for all American troops serving in the Middle East, as well as their families here at home. The Stream is always praying for your safe and swift return.

While this isn’t your typical military homecoming photo, it should be noted that U.S. Navy Blue Angels pilots fly around the country to entertain and educate onlookers. Earlier this month, the Blue Angels returned to Naval Air Station Pensacola in Florida after performing flight demonstrations in 32 different locations across the country.