This Week at War: Tragedy and Glory 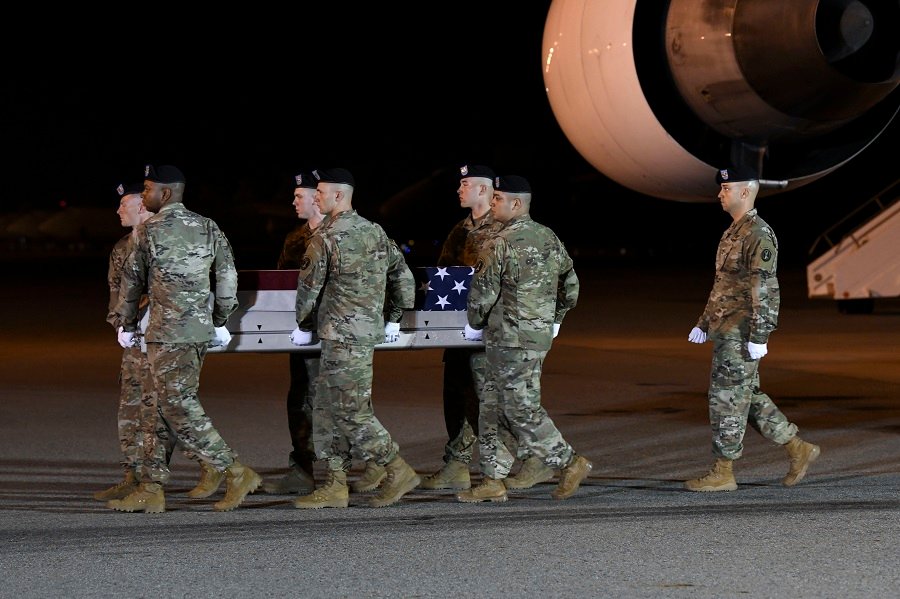 A U.S. Army carry team transfers the remains of Spc. Michael Nance on July 31, 2019, at Dover Air Force Base in Delaware.

Two more American military heroes made the ultimate sacrifice this week during the war in Afghanistan, which will soon enter its 19th year.

According to the Pentagon, U.S. Army Spc. Michael Nance and Pfc. Brandon Kreischer were killed on Monday in Tarin Kowt, which is the capital of the southern Uruzgan Province. They died “as a result of wounds sustained in a combat-related incident,” according to the Department of Defense. The attack is under investigation.

Newsweek reporter James LaPorta, himself a combat veteran, reports that the soldiers were killed in an “insider attack.” The 82nd Airborne Division paratroopers are the 15th and 16th American service members to lose their lives in Afghanistan this year.

We are saddened to announce the death of SPC Michael Nance and PFC Brandon Kreischer of @PantherBrigade. They were both killed in Afghanistan on July 29, 2019. The bond between All American Paratroopers is eternal, and we will forever remember our brave Fallen Paratroopers. pic.twitter.com/d4YtS01wsL

Specialist Nance was a 24-year-old patriot from Chicago.

“His eyes lit up whenever he talked about two things: the Army and his family,” the fallen hero’s great uncle, Kenon Forest, told the Chicago Sun-Times.

Mitch Dudek’s article said Spc. Nance was in the first month of his deployment to Afghanistan when he was killed. The soldier’s death has devastated his family and particularly his mother, who last saw her son during a recent trip to Europe. The fallen hero is also survived by a 13-year-old younger brother, according to the report.

“I want people to know that he was loved, and he died doing what he loved,” Gold Star mother Shawn Gregoire said in a text message to the newspaper.

Army Spc. Michael Isaiah Nance hailed from the South Side and had a deep love for both the Army and his family, @mitchdudek reports.https://t.co/lPMjVDNSJY

Private First Class Kreischer, of Stryker, Ohio, was just 20 years old. He was a toddler when the war in Afghanistan started and unable to legally buy a beer on the day he died.

More importantly, Pfc. Kreischer was a husband and a father-to-be, according to Tony Geftos of WTVG-TV. The reporter also unearthed a powerful senior memory book entry written by Kreischer during his final weeks of high school last year.

“… I am very proud to be an American. I believe that whatever cause America believes in, I have an obligation to believe in, because I am a patriot,” the future Army soldier wrote. “If I die in the combat zone for America, I do not call it a tragedy, I call it a glory.”

Army Paratrooper Pfc. Brandon Kreischer, 20, of Bryan wrote this during his Senior Year at Bryan High School (Class of 2018). This week, Kreischer and Army Specialist Michael Nance, 24, of Chicago, gave their lives for their country when they were killed in Afghanistan. pic.twitter.com/Zpi31DkNJu

The Stream has been urgently trying to remind all Americans — including President Trump — that our military is still very much at war in Afghanistan. The loss of two more selfless, youthful warriors makes abundantly clear that despite many politicians and journalists looking the other way, America’s longest war will not be over until every single U.S. service member is out of harm’s way.

Private First Class Kreischer’s pregnant widow and Specialist Nance’s grieving mother are experiencing pain that very few of us can imagine. We ask the Lord to wrap His arms around these courageous women, Pfc. Kreischer’s unborn child and all who knew and loved these valiant young men. We also ask God to help us — and the entire nation they fought and died for — to never forget these American heroes.

As Pfc. Brandon Kreischer so poignantly wrote, our country being blessed by volunteer warriors like him and Spc. Michael Nance is indeed “a glory.” As we mourn the tragedy of their deaths, we are also eternally grateful that these men lived.

Hundreds of Georgia National Guard soldiers who spent the last seven months deployed to Afghanistan returned to American soil this week at Fort Stewart in Savannah.

Welcome home, warriors! Thank you for your service.