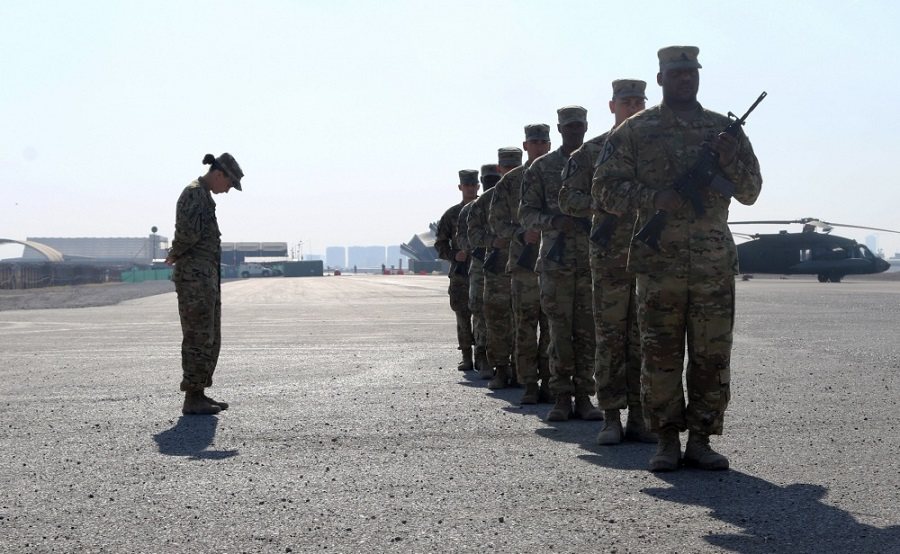 A U.S. Army ceremonial firing team awaits the completion of the invocation during a November 22, 2019, memorial service at Erbil Air Base in Iraq for two of their pilots killed in Afghanistan.

One of the U.S. Army soldiers killed last month during the war in Afghanistan was laid to rest on Thursday in his home state of Texas.

Chief Warrant Officer 2 David Knadle was a 33-year-old husband, father, son, brother and Army helicopter pilot. He was killed in Afghanistan’s Logar Province on November 20 when their chopper crashed during combat operations. CWO2 Knadle died beside his co-pilot and friend, CWO2 Kirk Fuchigami Jr., 25, who will be laid to rest next week in Utah.

According to Knadle’s obituary, the soldier was on his first combat deployment after years of preparation. “Through rigorous training, studying and innumerable hours of flight hours, David graduated Warrant Officer Basic Course as an aviator, favoring the AH-64E, Apache helicopter,” the tribute said.

Among his many awards, Knadle was posthumously awarded the Bronze Star. Please say a prayer tonight for this fallen hero’s wife, Silkey, his daughter, Starling, his stepson, Eason, and all grieving family members, friends, and fellow soldiers.

America is blessed to be defended by patriots like CWO2 David Knadle and CWO2 Kirk Fuchigami Jr. We pray for the swift and safe return of their brothers and sisters in arms still risking their lives overseas.

Elsewhere in Afghanistan, U.S. Special Representative for Reconciliation Zalmay Khalilzad made a surprise stop in Kabul this week in an effort to resume peace negotiations with the Afghan government and the Taliban. His visit comes on the heels of President Trump’s unannounced trip to Afghanistan over the Thanksgiving holiday.

According to the Military Times, Khalilzad “will be pushing for a cease-fire or at least a reduction in violence with an eye to an eventual end to fighting.” The most recent major attack in Afghanistan was on Wednesday, when a famous Japanese doctor and five others were ambushed and tragically murdered.

Please continue to pray for a lasting, honorable end to America’s longest war.

Thousands of additional American troops could soon be headed to the Middle East to counter the threat posed by Iran, according to a Thursday evening report by ABC News.

“The idea of sending more American troops to the Middle East has been in the works for months but it is more likely given the threat from Iran right now,” the report said, citing an ABC News source.

Brave U.S. troops are still battling ISIS in Iraq and Syria, as noted this week by Foreign Policy magazine. “The United States remains in other areas of eastern Syria in Deir Ezzor and Hasakah Provinces, where it is keeping Islamic State sleeper cells on the run,” Seth Frantzman wrote.

Even after courageous American forces killed ISIS leader Abu Bkar al-Baghdadi in October, it remains a very volatile time for both countries. Syria, of course, is one of the most kinetic, confusing battlefields in history, with the United States, Turkey, Russia, Iran, the Kurds, and terrorist groups all waging war there in some capacity. In Iraq, Prime Minister Adel Abdul Mahdi just resigned after months of upheaval and violent protests.

While updates from the war zone rarely make the news these days, we need to keep praying for our deployed troops and their families here at home. We thank these heroes for their service and sacrifice.

Ahead of Saturday’s Pearl Harbor Remembrance Day, a group of deployed sailors has returned from overseas to the Hawaii Naval Base. A U.S. Navy sailor serving aboard the guided-missile destroyer USS William P. Lawrence embraces his children during a November 7, 2019, homecoming celebration at Joint Base Pearl Harbor-Hickam in Hawaii.

Welcome home, heroes, and thank you to all past and present Pearl Harbor sailors who have done so much to keep our country safe.

This Week at War: Praying for Peace in Afghanistan