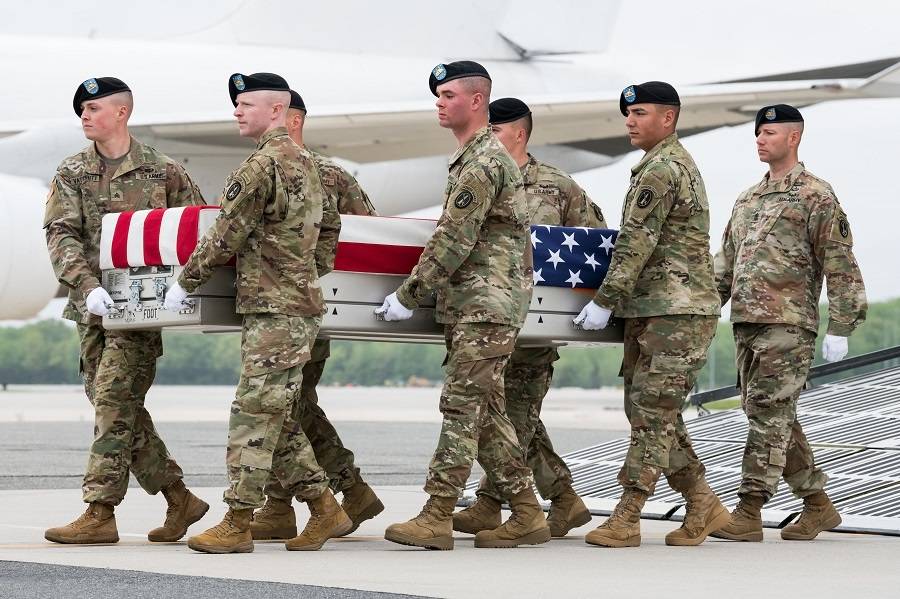 A U.S. Army carry team transfers the remains of Pfc. Michael Thomason of Lincoln Park, Michigan, during a dignified transfer ceremony on May 1, 2019, at Dover Air Force Base in Delaware.

An American soldier died during the ongoing war in Syria on Monday.

According to the Department of Defense, U.S. Army Pfc. Michael Thomason made the ultimate sacrifice in Kobani, near Syria’s volatile border with Turkey. The Pentagon is classifying the 28-year-old Michigan soldier’s death as a non-combat incident.

As you can see above, the fallen soldier’s flag-draped casket arrived on Wednesday at Dover Air Force Base in Delaware. Please pray for the Thomason family during this unimaginably difficult time.

In neighboring Iraq, where two U.S. service members have died this month, “the largest combined operation since the defeat of” the ISIS caliphate has just taken place, according to U.S. Central Command. The military said coalition forces helped Iraq’s counter-terrorism service destroy ISIS sleeper cells in the Wadi Ashai region of northern Iraq.

“The clearance of the Middle Euphrates River Valley in March represented a substantial loss for (ISIS), but it was not the end,” said Maj. Gen. Christopher Ghika, as quoted in the Centcom news release. “The (counter-terrorism service has) dealt a major blow to (ISIS’) ambitions; and with this strike, they lose even more of their capacity to destabilize Iraq.”

Clearly, the fight against ISIS continues in both Iraq and Syria. Please continue to pray for our troops and their families. A U.S. Marine presents a folded American flag to Shannon Slutman during the funeral for her husband, Staff Sgt. Christopher Slutman, at Arlington National Cemetery on April 30, 2019.

The above photograph of Staff Sgt. Slutman’s grieving widow and daughters is a devastating reminder that our military community is still at war. We ask our Lord to wrap His arms around the Slutman, Hendriks and Hines families as they say goodbye to the American heroes they knew and loved.

U.S. Air Force pilots who had been deployed to Afghanistan for the last six months returned to Aviano Air Base in Italy this week. With loved ones there to greet them, the airmen could finally enjoy some time with their families after a job well done. An F-16 Fighting Falcon lands at Aviano Air Base in Italy on April 30, 2019, after a six-month deployment to Afghanistan.

Thank you for your service, heroes!