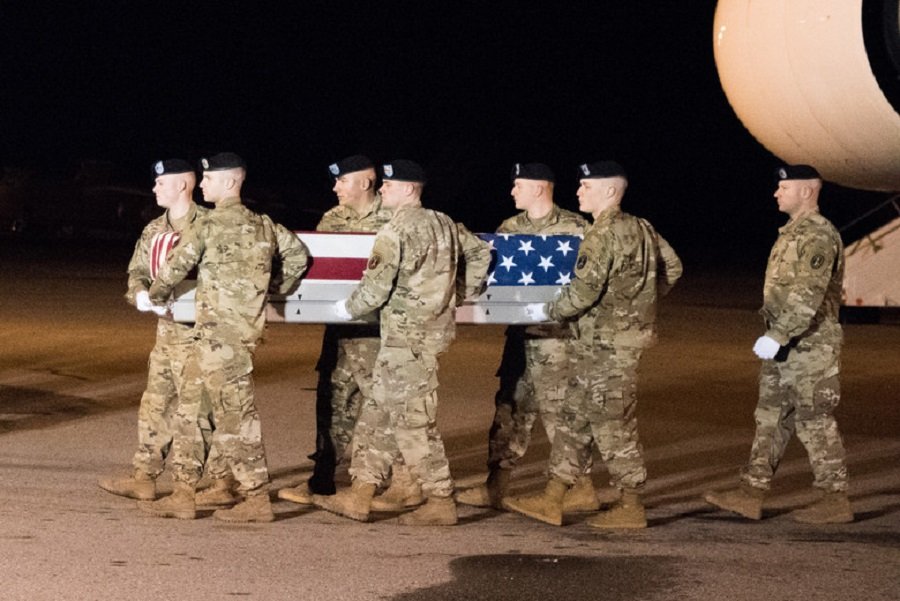 A U.S. Army carry team transfers the remains of Sgt. Leandro A.S. Jasso, of Leavenworth, Washington, on November 26, 2018, at Dover Air Force Base in Delaware.

Five Americans have made the ultimate sacrifice there this month.

The first was Utah National Guard Maj. Brent Taylor, 39, who was also the Mayor of North Ogden, Utah. As The Stream shared before Thanksgiving, Maj. Taylor was “a man of faith” who loved his wife and seven children.

The second was U.S. Army Sgt. Leandro A.S. Jasso, 25, of Leavenworth, Washington. Stars and Stripes reports that the young Army Ranger was already on his third overseas deployment when he was killed in action.

“I knew he was doing what he loved,” the fallen Ranger’s friend, David Sorensen, told the newspaper. “He always wanted to go and save people.”

According to the Pentagon, Sgt. Jasso died on Saturday during a battle in the Khash Rod District of Afghanistan’s Nimruz Province.

“Sgt. Jasso was a humble professional who placed the mission first, lived the Ranger Creed and will be deeply missed,” said U.S. Army Ranger Lt. Col. Rob McChrystal, as quoted by USA Today.

Tuesday’s improvised explosive device (IED) attack on American troops occurred in the eastern Afghanistan city of Ghazni. AP also reported that it “appeared to be the deadliest attack on U.S. forces in Afghanistan in the last 17 months.”

In addition to the three U.S. warriors killed, who will not be publicly identified by the Pentagon until their families have been notified, three more service members and an American contractor were wounded. The Taliban has claimed responsibility for the cowardly IED attack, according to AP.

For nearly a decade, I have been urging Americans – particularly politicians and journalists – to pay closer attention to the longest war in U.S. history.

Mr. President, will you be commenting on the deaths of 3 American heroes today in Afghanistan? I think you should, sir. 5 US troops have been KIA this month & our country's newest Gold Star families need to know that all Americans, including the commander-in-chief, are with them.

While this month’s tragedies in Afghanistan should serve as a further call to action, they are first and foremost a call to prayer.

Having been to Dover Air Force Base and witnessed the anguish of Gold Star parents, siblings, spouses and children as their fallen heroes return from Afghanistan, we must ask God to comfort the Jasso and Taylor families in their respective hours of grief.

At the same time, we should all be thinking about the three military families who will soon receive knocks on their front doors from uniformed military messengers. Their lives will never be the same after those dreaded knocks, which makes our support even more crucial. Whether it’s one week or one year after this staggering tragedy, we must assure them of our resolve to never forget.

Four additional families will soon be told that their injured loved one is in a military hospital. We must also pray for them, while asking the Lord to help all four wounded patriots make full recoveries.

Until all brave men and women in uniform are home from Afghanistan, it is our duty as Americans to take notice of their sacrifices. That doesn’t just mean waving flags on Veterans Day, Memorial Day and the Fourth of July. It means thinking, discussing and praying – every single day.

May God bless our country’s fallen and wounded heroes, as well as their loved ones. We will always remember their extraordinary deeds in defense of our freedom.

This Week at War: Four Patriots