The brave men and women of the U.S. military are leading the way in the worldwide battle against COVID-19. 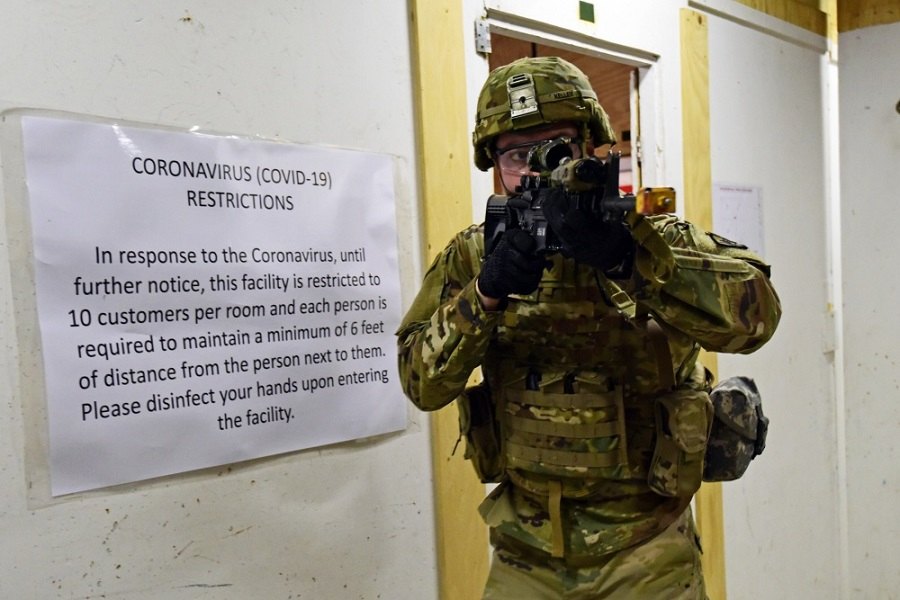 While searching for the next Military Photo of the Day, I stumbled on the above image of a U.S. Army paratrooper serving in Italy. The European nation is essentially a war zone as the worldwide battle against the coronavirus intensifies.

Davide Dalla Massara’s photo struck me for two reasons. First, it shows the gallantry of a warrior doing his best to stay prepared while deployed to the epicenter of an evolving crisis. Second, this selfless soldier is almost certainly worried about his own family and friends back home. These are the sacrifices made by our nation’s remarkable troops and military families.

American service members are still being infected by COVID-19 as they work around the clock to protect us. As of Thursday morning, 51 American troops had tested positive for the coronavirus.

While we pray for those infected, let us also celebrate some good news. Two U.S. service members who previously tested positive for COVID-19 have reportedly recovered. We thank God for giving these heroes renewed health and strength.

The valiant men and women of the National Guard are helping provide food and supplies while also maintaining order in dozens of American states. The number of National Guard troops mobilized specifically to fight coronavirus is “expected to double” to about 4,000 in the next few days.

Our National Guard members continue to assist our local, state and federal partners protect our communities from the spread of COVID-19. https://t.co/xGzQNEf418

As President Trump made clear earlier this week, “the world is at war with a hidden enemy.” No fighting force is better equipped to lead the global battle against coronavirus than the extraordinary Americans who’ve spent the last 18 years fighting the world’s most dangerous terrorists.

In fact, the conflict in Afghanistan has been mostly put on hold due to COVID-19 concerns. “The U.S. military is pausing the movement of any new troops into Afghanistan and is quarantining 1,500 troops and civilians who recently arrived to avoid any possible spread of the coronavirus,” according to a Thursday report by the Associated Press.

While COVID-19 can’t be captured like Khalid Sheikh Mohammed, it can someday be eliminated like Osama bin Laden. The day the disease is finally defeated won’t be as dramatic as a Navy SEAL raid, but if we follow the guidance of the CDC and other experts while letting doctors, nurses, first responders, service members, police, delivery and truck drivers, grocery store and pharmacy employees, postal workers and other essential workers do their jobs, this new war can be won.

We will do what it takes to mitigate the effects of COVID-19.

Yesterday as part of a DHHS-led effort, AMC transported 13 pallets containing 500k COVID-19 sampling swabs on a C-17 Globemaster III. They took the kits from @AirAviano in Italy to the Memphis TN @AirNatlGuard Base. pic.twitter.com/vWyEhAGQHO

The U.S. Navy is preparing two massive hospital ships for deployment to the east and west coasts, according to The Hill. U.S. Marines serving around the world are dealing with mandatory quarantines in some locations, according to the Marine Corps Times.

The U.S. Army Corps of Engineers will likely help build temporary hospitals, according to Military.com. The U.S. Coast Guard is busy enforcing travel restrictions and dealing with the many cruise ships impacted by the coronavirus outbreak, according to multiple reports.

Federal agencies, including the U.S. Coast Guard and the Centers for Disease Control and Prevention, are discussing how best to handle the ship after a 2-year-old passenger recently tested positive for the coronavirus.https://t.co/hWBsJqyNjo

Every single American should be proud of our extraordinary troops and their families. Like the days after 9/11, they have boldly and bravely stepped forward to confront and defeat an almost entirely invisible enemy.

Like the soldier pictured above while serving in Italy, the courageous men and women of our Armed Forces will go anywhere and do whatever it takes to win the war on coronavirus. God has blessed the United States with the greatest military on earth, and with His guidance, these heroes will lead America and the world to perhaps our greatest shared victory since the end of World War II.