Tom Sileo's weekly look at how the military is battling COVID-19 and how the war is affecting U.S. troops and military families. 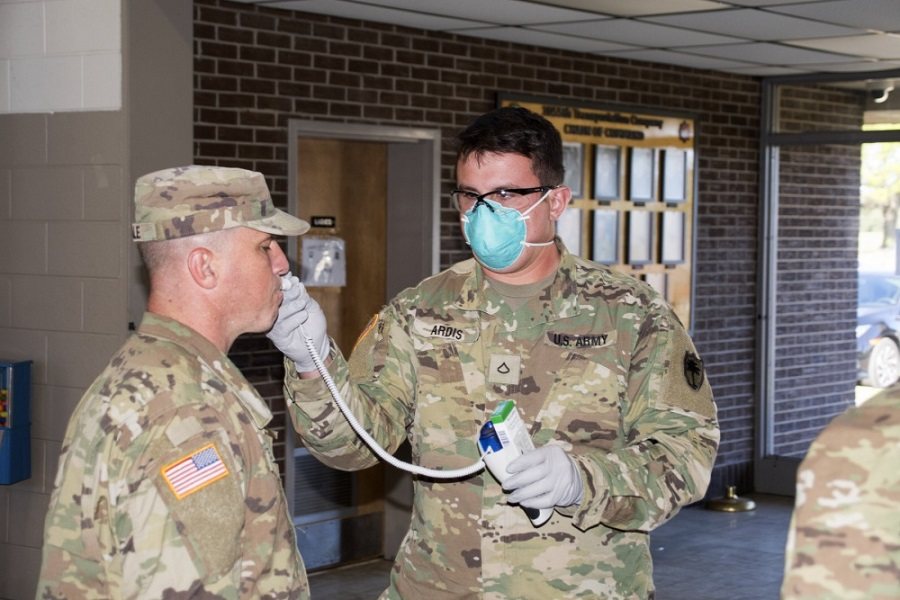 A U.S. Army National Guard soldier takes the temperature of a teammate during a medical pre-screening in Laurens, South Carolina, in support of the state's COVID-19 response efforts.

If a quote could sum up the selfless fortitude being displayed by our nation’s brave men and women in uniform during this new war on coronavirus, perhaps the words of Gen. George S. Patton come close.

“I am a soldier,” the World War II hero once said. “I fight where I am told, and I win where I fight.”

“He was having trouble breathing,” the fallen soldier’s daughter, Shandrea Hickok, told Military Times reporter Kyle Rempfer. “He was kind of huffing and puffing and he was going to the emergency room.”

Captain Hickok was a National Guard physician assistant and hardworking medical professional who volunteered to serve in 2010 despite being well over the age of 40. Simply put, he wanted to help people.

“I think that’s an important aspect of my dad,” the fallen soldier’s daughter told the newspaper. “He was just really devoted.”

Please join The Stream in praying for Captain Hickok’s children and his entire family as they mourn this incomprehensible loss.

As of Thursday morning, 35 U.S. service members are hospitalized with COVID-19 symptoms out of nearly 900 infected, while 59 troops have recovered, according to Fox News correspondent Lucas Tomlinson.

The most serious outbreak has been aboard the Guam-docked USS Theodore Roosevelt, which had experienced at least 93 infections as of Wednesday. After the ship’s captain pleaded for help, the decision was made to get 2,700 U.S. Navy sailors off the aircraft carrier by the end of the week, according to CQ reporter Andrew Clevenger.

Please say a special prayer for the command and crew of the USS Theodore Roosevelt as they deal with an unprecedented crisis.

I had the honor of visiting the USS Theodore Roosevelt and meeting the service members deployed there in the Persian Gulf. Hoping they get off ASAP and have healthy recoveries. Impossible to socially distance on those carriers. https://t.co/bPdUlvB5Hr

Despite serious health risks, tens of thousands of American troops around the world are waking up every day and doing everything they can to help beat the virus. At this hour, thousands of military and civilian medical professionals aboard the USNS Mercy and USNS Comfort are helping coronavirus patients off the coasts of America’s two largest cities.

As of Thursday morning, more than 18,500 members of the National Guard had been mobilized in the war on coronavirus. From the remarkably rapid transformation of the Javits Center in New York to a similar effort thousands of miles away at the CenturyLink Field Event Center in Seattle, America’s citizen-warriors are stepping forward in a big way during this crisis.

“I’ve never quite seen the scope of this commitment in 39 years in the Army,” Gen. James C. McConville told the Seattle Times this week.

Rows of beds and medical equipment line the floor in the CenturyLink Field Event Center in #Seattle. The site is undergoing transformation from a sports arena to a world-class #Army hospital to help free up bed space in hospitals … https://t.co/FH5zZakmUZ #COVID19 pic.twitter.com/IZo4xm7oq0

Americans should also not lose sight of the fact that thousands of U.S. troops are still deployed around the world, from hotspots like the Middle East and the Korean Peninsula to COVID-19 epicenters like Italy and Germany. On Wednesday, President Trump tweeted about Iran possibly targeting American forces or interests, underscoring the threat of a rogue regime or terrorist organization trying to take advantage of the COVID-19 crisis.

“We’re continuing to train mission essential personnel,” Gen. McConville said in a recent Pentagon briefing. “But really, what we’re trying to do is we’re trying to balance protecting the force so we can protect the nation.”

Some troops have faced mandatory quarantines before or after their deployments. Others have seen their overseas tours extended. Others are being sent to the southern border. These stark realities impact not only about 90,000 service members, according to Newsweek, but their families.

More troops are headed to the border to help federal agents deal with the coronavirus pandemic https://t.co/aElp8HdjfT

While it might be impossible for Americans to adequately thank our military heroes for everything they are doing to win the war on coronavirus, perhaps we can start by not only praying for these valiant men and women, but sharing their stories. Working alongside the incredible doctors, nurses, first responders, essential store workers, delivery drivers and so many others stepping up during this pandemic, U.S. service members are undoubtedly living up to Gen. Patton’s words.

“I am a soldier. I fight where I am told, and I win where I fight.”