The Revolutionary War was largely fought by Presbyterians who believed in liberty under a sovereign God. The revolutionaries of today have forgotten those ideals 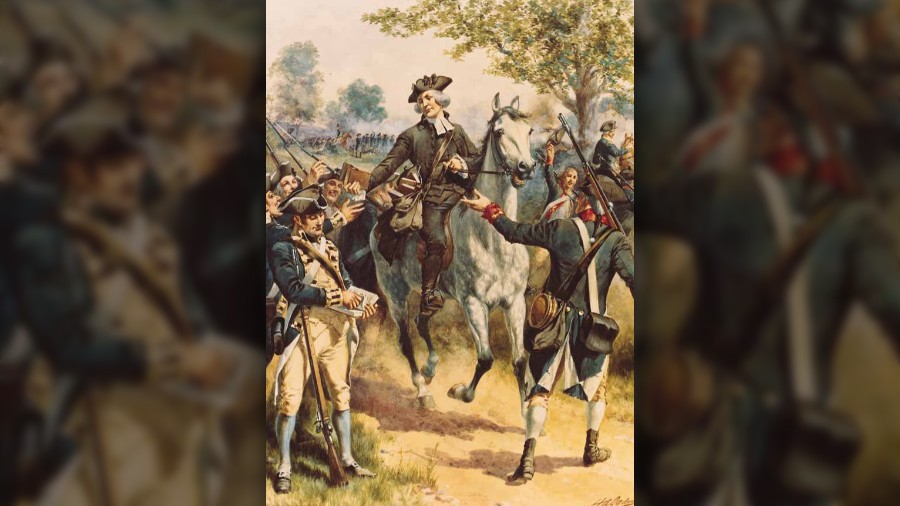 Rev. James Caldwell, a Presbyterian minister, fought in the Battle of Springfield. When the soldiers ran out of wadding paper for their gunpowder, he brought hymnals so they could use the pages, enabling them to win the battle. Waterpainting by Henry Alexander Ogden.

“There is no good crying about the matter,” Horace Walpole told the House of Commons when news of the American Revolution arrived in England. “Cousin America has run off with the Presbyterian parson, and that is the end of it.”

The parson Walpole was referring to was John Witherspoon. Witherspoon was the president of the College of New Jersey, which would later become Princeton. He was a signer of the Declaration of Independence. He was also a descendant of the founder of the Presbyterian Church of Scotland, John Knox.

Presbyterians Made Up Half of the Revolutionary Army, Historian Estimates

Our ignorance of history has sent much about America’s origins down the memory hole. “John Calvin,” the eminent historian Leopold von Ranke once observed, “was the virtual founder of America.” Not long ago, this statement would have seemed uncontroversial, especially amongst historians. Consider the following:

The population of the colonies at the time of the Revolution was about three million. Historian Paul R. Carlson estimates that of that number: “900,000 were of Scotch or Scotch-Irish origin. 600,000 were Puritan English. [O]ver 400,000 were of Dutch, German Reformed, and Huguenot descent. That is to say, two thirds of our Revolutionary forefathers were trained in the school of Calvin.”

They believed in liberty under a sovereign God. They were fiercely independent. And the American Republic was their gift to the world.

King George III and Others Called it a “Presbyterian War”

One historian noted that many Presbyterian pastors led the Revolution from the pulpit. King George III himself concurred, calling it a “Presbyterian war.” Hearing of the American rebel leaders, he exclaimed: “Are they not Presbyterians?”

British historian George Trevelyan stated that “political agitation against the Royal Government had been deliberately planned by Presbyterians.” Further, the Revolution “was fostered and abetted by Presbyterians in every colony.”

In fact, in 1776 Tory William Jones announced that this “has been a Presbyterian war … and accordingly the first firing against the King’s troops [at Lexington Green] was from a Massachuset [sic] meeting house.”

A Hessian captain fighting with the British agreed. In 1778, he told a friend “call this war … by whatsoever name you may. Only call it not an American Revolution. It is nothing more nor less than an Irish-Scotch Presbyterian Rebellion.”

There was one particularly stark example of this. During a five-to-one battle in Springfield, New Jersey, the colonists were getting pushed back. The battle waxed hot. Then, they ran out of wadding paper for their gunpowder. Without wadding paper, they couldn’t shoot. Disaster loomed.

Rev. James Caldwell sprang into action. He raced on horseback to the church. There, he grabbed a stack of hymnbooks by Isaac Watts. Racing back, he tossed hymnbooks to the soldiers. “Give ‘em Watts, boys!” he roared as they ripped out the pages. “Put Watts into ‘em!” With Watts’ hymns, the Redcoats were beaten back. The Battle of Springfield was won on June 23, 1780.

To Worship in Freedom

Famous American historian George Bancroft summed it up this way:

The Revolution of 1776, so far as it was affected by religion, was a Presbyterian measure. It was a natural outgrowth of the principles which the Presbyterianism of the Old World planted in her sons, the English Puritans, the Scotch Covenanters, the French Huguenots, the Dutch Calvinists, and the Presbyterians of Ulster.

Calvin, wrote Bancroft, was “the father of America.” Bancroft was not a Calvinist, but he was a historian. “He who will not honor the memory and respect the influence of Calvin knows but little of the origin of American liberty,” he stated. He pointed to the Presbyterian synod in Philadelphia in 1775. The synod publicly called for a break from England and urged prayer for the Congress. Bancroft credits the Presbyterians with making the first move towards independence.

The soul of America is at stake.

This shouldn’t be surprising. Colonial America had been convulsed by Great Awakenings under George Whitefield, Jonathan Edwards and others. These took place just prior to the Revolution. Many Presbyterians had fled to America to worship in freedom. As such, as they had little love for the British crown. They believed in liberty under a sovereign God. They were fiercely independent. And the American Republic was their gift to the world.

American Democracy Was Born of Christianity

The Second American Revolution is being waged by a different sort of people. Those purging history from our streets are already coming for the Founders. John Witherspoon’s statue in Washington, D.C. has been left alone — but that’s because they don’t know who he is. They do not believe in liberty and individual responsibility under God. Most do not believe in God. They believe in collective responsibility, not individual responsibility. Comparisons have been made between the rioters and the Patriots. It is only being made by the staggeringly ignorant.

American democracy was born of Christianity. Without that lifeblood sustaining the Republic, she is living on borrowed time. It is significant that the French Revolution has gained popularity amongst the rioters. These people seek no continuity with the past. They do not recognize God’s sovereignty. And they do not know their own history.

On Independence Day, it is more important to fight them tooth and nail than ever. The soul of America is at stake.