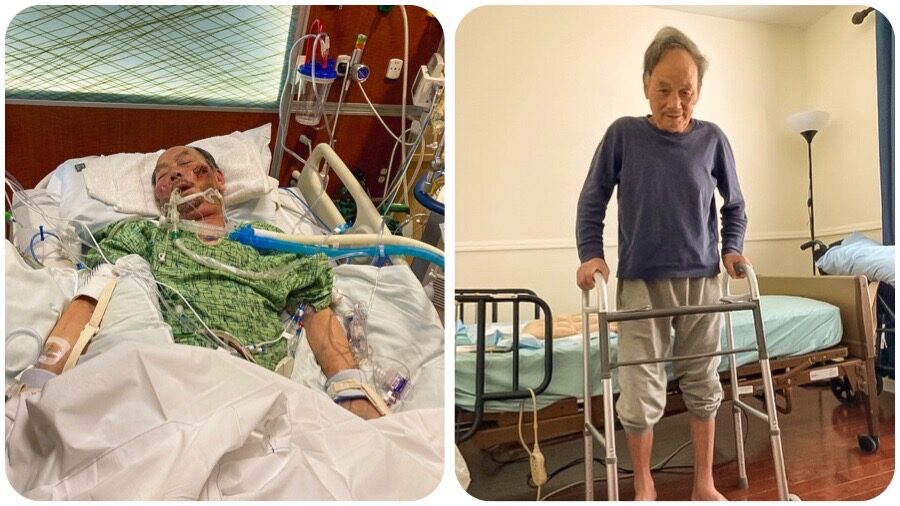 Mr. Sun Ng, before and after his treatment for COVID with Ivermectin, against his hospital's dogged insistence.

Let me pass along a story. The following news release came courtesy of a highly respected law firm:

Over the Thanksgiving weekend, a patient who received Ivermectin only as a result of a court order was discharged, fully recovered, after a legal battle to receive the potentially lifesaving medication. Edward Hospital in Naperville, Illinois, had refused to administer the drug, despite the wishes of Dr. Man Kwan Ng, whose father was desperately ill and hospitalized with COVID-19.

On November 5, 2021, Judge Paul Fullerton of the Eighteenth Judicial Circuit Court in DuPage County, Illinois, ordered Edward-Elmhurst Healthcare to grant temporary and emergency hospital privileges to Dr. Alan Bain. Over the strenuous objection of Edward Hospital, Bain was allowed to administer Ivermectin to the patient, Sun Ng, who at that point had been on a ventilator for 22 days.

The court ordered Ivermectin treatment was given to the 71-year-old Ng for five days, November 8 through November 12, and on November 27, 2021, Ng was released. Fully recovered, he is now at home with his daughter and family.

“My father’s recovery is amazing,” shared Dr. Man Kwan Ng. “My father is a tough man. He was working so hard to survive, and of course, with God’s holding hands. He weaned off oxygen about three days after moving out of the ICU. He started oral feeding before hospital discharge. He returned home without carrying a bottle of oxygen and a feeding tube installed to his stomach. He can now stand with a walker at the bedside and practice stepping. After being sedated for a month on a ventilator in ICU, his performance is beyond our expectations. Praise the Lord.”

Dr. Ng also stated, “Our family especially thanks Judge Paul Fullerton. Without him, we couldn’t bring my father home and couldn’t see him smile at us again. We also gratefully thank our attorneys, Ralph C. Lorigo and Mauck & Baker, LLC, for the entire legal process and fighting for my father’s rights. We also sincerely thank Dr. Alan Bain for walking along with us and his administration of Ivermectin to my father. We also want to say thank you to the doctors and nurses in the hospital. I saw the caring of the nurses when I stayed at the bedside with my father.”

Kirstin Erickson, attorney at Mauck & Baker, LLC, one of the attorneys representing the interests of Sun Ng, accredits the swift court action of Fullerton, who ordered the Ivermectin treatment, as the reason that Ng is at home – alive, healthy, and lucid.

Despite the hospital’s flouting of Fullerton’s initial order issued of November 5, Edward-Elmhurst Health eventually complied. Erickson thanks Edward Hospital and its staff for their ultimate cooperation in allowing Ng to receive the court-ordered medication.

Attorneys from Mauck & Baker represented Dr. Man Kwan Ng, whose father, Mr. Sun Ng was a patient at Edward Hospital. Ng was also represented by the Law Offices of Ralph C. Lorigo, which is handling Ivermectin litigation throughout the United States, with additional help from attorney Beth Parlato.

Why Leave Patients to Gasp to Death on Ventilators?

Why would a hospital deny a dying patient the “right to try” safe, well-known medications? Nobody connected with this case, including Mr. Ng or his family members, could give me an answer. The hospital never offered them one.

But then the COVID phenomenon is completely incomprehensible if we treat it as a public health emergency, rather than a political opportunity being exploited by our elites. To quote Rahm Emanuel, “Never let a crisis go to waste.”

Have we ever gotten a good reason why:

The New Cult and Its Sacraments

Why did our culture succumb to what Yale epidemiologist Dr. Harvey Risch calls a “pandemic of fear”?

Because there’s a new religion, and Caesar is behind it. Long ago, the flailing, failing Roman empire tried to knit itself together by inventing a new cult for the people: the worship of the emperor. It didn’t matter whether you actually believed in it or not. The point was your public compliance. You had to burn incense in front of a statue of a living politician, and act as if he were a god. Or you’d be ostracized, persecuted, impoverished, maybe killed.

With the COVID cult and its vaccination ritual, we’ve gone through each step but the last one.

Should It Shock Us When Pro-Choicers Take Lives?

There was no way our elites could lock down the economy (crushing small business and enriching billionaires) without a burgeoning panic. Or rush through fraud-prone mail-in and harvested ballot procedures for the 2020 election.

And to feed a panic you need steady death statistics, with no viable cures. So potential treatments for COVID had to be locked away out of reach, and nursing homes flooded with vectors of infection. To pump the otherwise unimpressive death stats. That way governors like Cuomo and Whitmer could seize emergency powers, and use them to confiscate guns. To close down churches. To ban political meetings — except for Marxist-led riots.

Yes, they were willing to cause thousands of preventable deaths, in pursuit of money and power. Does that sound shocking, that pro-choice zealots would show depraved indifference to human life? Really?

Keep in mind that the governments of Germany and Austria are about to put unvaccinated citizens under house arrest. That the government in Australia is locking potentially sick people in camps. That the mayor of New York, by decree, has just ordered every business in the city to force its employees to take an experimental gene therapy — even those with natural immunity, who already beat the disease. Obey or starve, that’s the American way, isn’t it?

The very word “immunity” has been redefined by the WHO’s website to refer only to vaccines. The existence of the human immune system vanished with a few keystrokes.

A disease which was apparently created in a Chinese bioweapons lab using mice “humanized” with organs stolen from babies killed by partial birth abortion now “requires” treatments developed with thousands more such Franken-mice, and hundreds of newly aborted babies.

Do you still think we’re dealing with “science” here? (If you want the science, find it here.)

The prophetic Catholic Archbishop Carlo Maria Vigano has shown that these power-grabs by elites have been coordinated globally. We’re witnessing the worst attack on personal freedom since the 1930s, when totalitarians gained power all across Europe. Millions of highly educated cowards refused to admit the truth while it was happening, of course. As they won’t admit it now.

Watch Robert Kennedy, Jr., interviewed here by Tucker Carlson, for a stunning expose of the corruption and favoritism that pervade the federal government’s relationship with Big Pharma, and the power grab by our elites.