Want to know how ruthless our enemies are? How unprincipled, vicious, and beyond the pale of basic human decency?

Maybe you really don’t. Because such facts are deeply alarming, the kind of news that ruins your day. But you need to know, and it’s my job to tell you.

Back in 2016, the Stream recounted Elaine Riddick’s tragic story as the victim of white racist eugenics. As the powerful documentary Maafa 21: Black Genocide exposes, Margaret Sanger and other elitist cranks started pushing mandatory sterilization laws in the 1920s. They exploited white racist panic to pass laws in a dozen states imposing the procedure on people who failed culturally biased IQ tests. (Mostly recent immigrants and blacks.)

The Nazis were so impressed, that they based their own laws on Sanger’s, and fêted her aide Harry Laughlin on a whirlwind tour of the “New Germany,” showing him how Planned Parenthood’s ideas were flourishing there.

Some 20 years after the Holocaust was exposed, Sanger’s laws were still on the books here. And Elaine Riddick was their victim in 1968.

As Jason Jones and I wrote:

The forced sterilization laws which Sanger and her allies passed were used to sterilize at least 60,000 Americans, but perhaps as many as 200,000, on the pretext that young women who became pregnant out of wedlock were “feeble-minded,” “immoral” or “socially useless” parasites — all rhetoric that Sanger personally used in her books, articles, and at least one speech before a Ku Klux Klan rally, as she recounts in her memoir.

Maafa 21 interviews Elaine Riddick, who was raped at age 13 and became pregnant. As she lay in the hospital waiting to deliver the baby, welfare officials from the state of North Carolina warned her illiterate grandparents that if they didn’t sign the consent form to have her irreversibly sterilized, the state would cut off their welfare benefits. They scrawled an “X” on the government form, and Elaine was sterilized without her knowledge. She only learned what had been done to her five years later, when welfare officials explained that she was too “feeble-minded” to care for a child “or even tie my own shoes,” as she recounts. Elaine was sterilized in 1968. The last such “eugenic” forced sterilization in the U.S. took place in 1983.

While Elaine never went to high school, she went on and finished college, and the one child which the United States government had permitted her to have — Tony Riddick, a child of rape — now runs his own successful company. Harry Laughlin, the eugenicist who helped pass the law that sterilized Elaine, died without any children. 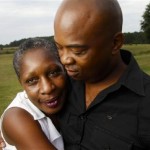 It’s not bad enough that Elaine Riddick couldn’t have any more children after her rape. Or that the State of North Carolina imposed sterility on her, “cutting me like a hog, lynching my future children in the womb,” as she recently told Tucker Carlson. Or even that the organization which helped write the laws in question, Planned Parenthood, is still wealthy, powerful, and funded by the U.S. government.

the rest of her life crusading against these forms of injustice — and against the violence and injustice of abortion. A profile of Riddick from a few years ago described her as “passionately pro-life” and noted that she shares “her story at anti-abortion events around the country.” She has written at length about her pro-life views.

But a recent profile of Riddick, by Washington Post reporter Meena Venkataramanan, attempts to obscure Riddick’s pro-life views and paint her as a supporter of abortion and Roe v. Wade. The headline of the piece is “She survived a forced sterilization. She fears more could occur post-Roe.” The meaning we are supposed to take from this, of course, is that this survivor is a supporter of Roe, and therefore a supporter of abortion.

They Stole Her Fertility. Now They’re Stealing Her Good Name

Ultimately, Riddick believes that “women should have control of their reproductive health” and that the government should not interfere with their decisions.

“I think a woman should have control of her body,” she said. “I didn’t have control of my body, and I have been devastated since I found out that this is what happened to me. I never had the chance to say yes or no.”

The article is error-ridden and full of the author’s opinions masquerading as facts. But what’s most appalling about it is how it uses Riddick’s story and life-long advocacy as a defense of abortion, despite the fact that Riddick herself is deeply opposed to the taking of innocent human life.

I was glad to see Ms. Riddick appear on Tucker Carlson to correct the Post’s willfully dishonest article, and demand they remove or completely rewrite it.

A Murderer from the Beginning

Well, “glad” is too strong a word. I was heartbroken when I first read the story of what happened to Riddick in 1968. When I saw her on TV, it all came back to me. Hearing how the abortion movement is using its own crime against her body to kill more babies today … I’ll admit that I broke down crying, right in front of my girlfriend.

We aren’t fighting flesh and blood, my friends, but principalities and powers. As Our Lord said to people like those at Planned Parenthood and the Washington Post:

You are of your father the devil, and your will is to do your father’s desires. He was a murderer from the beginning, and has nothing to do with the truth, because there is no truth in him. When he lies, he speaks according to his own nature, for he is a liar and the father of lies. (John 8:44)