The Shameless Politicization of Hurricane Ian 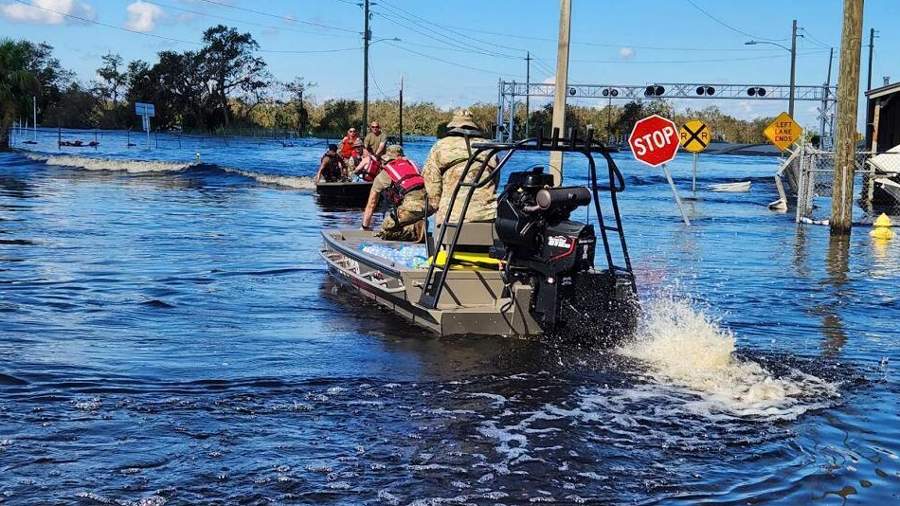 ”You never want a serious crisis to go to waste … it’s an opportunity to do things that you think [thought] you could not do before.” These were the infamous words of Obama’s chief of staff Rahm Emanuel in 2008 during the financial meltdown just days after Obama’s election.

He presumably got the quote from Winston Churchill, who said the phrase in the mid-1940s near the end of WW II. Churchill was referring to finding a “silver lining” of opportunity in the middle of a crisis — in a good way. He was able to form an unlikely alliance with Stalin, along with Roosevelt.

Transforming America … One Crisis at a Time

Emanuel didn’t mean it in a good way. He meant it in the context of taking advantage of the American people in a time of crisis by pushing through their radical left-wing policies. His boss had just said five days before the election, “We are five days away from fundamentally transforming the United States of America.” Emanuel understood that most Americans were not ready to go along with that short of a “serious crisis.”

Emanuel’s quote has become the Democrats’ mantra and is probably on page 1 of their play book. Blue states used it during the pandemic, shutting down churches and gun stores while allowing smoke shops and tattoo parlors to stay open. Just last month they used our 40-year high inflation (that they created) to ram through a bill with the fake name of Inflation Reduction Act that provides $370 billion to drop in the offering plate of their climate change cult church. They were giddy during the signing ceremony, and I’ll bet they made Emanuel proud.

Lehr believes when the rising levels of CO2 do occur, it has a positive impact, as crops flourish with exponentially greater yields. In the Netherlands, farmers are pumping additional CO2 into their tulip greenhouses.

Now, they are trying to politicize Hurricane Ian, saying that it’s the result of climate change! They must think that we, the American people, are (A) stupid, (B) suffer from amnesia, and/or (C) have no access to the internet (as they think black people have no access to getting IDs).

As reported by Tucker Carlson, political hack Don Lemon all but got into an argument with Jamie Rhome, Acting Director of NOAA’s National Hurricane Center, on whether or not Ian was caused by climate change (I thought libs were all about following the science). And Senator Amy Klobuchar (D-MN) suggested that voting for Democrats in the mid-terms would stop hurricanes. See both interview clips here.

There are no data to back up the claim that there’s been an uptick in hurricanes in recent history. Click here to see a graph of all major hurricanes by decade in the U.S. over the last 100 years. It depicts all hurricanes that were ranked 3, 4 or 5 on the Saffir-Simpson Hurricane Scale upon hitting U.S. land.

As you can see in the graph, the fact is there were fewer major hurricanes from 2011 to 2020 than in any decade in the last century.

And before that 100-year window was the devastating hurricane that completely demolished Galveston, Texas, on Sept. 14, 1919.

From the Ice Age to Cataclysmic Warming

Quite frankly, I get tired of dignifying their claims of “climate change” by even responding. It’s kind of like responding to the question, “When did you stop beating your wife?” I don’t want to get sucked in to politicizing this disaster myself, but I feel there must be some push back to their shameless rhetoric.

There’s never been any scientific evidence of a definite warming trend of our planet. There’s only proof that our climate is cyclical. Let’s not forget that the cover story of the June 24, 1974 issue of Time magazine was Another Ice Age? Al Gore was already 25 years old at the time that article appeared. He produced the film An Inconvenient Truth when he was 58. How is that we went from another Ice Age to global warming between Gore’s 25th and 58th birthdays?

Some Real Science on the Matter

In 1999, the Global Warming Petition Project was initiated, a petition of scientists who rejected the bases on which the Kyoto Protocol was created two years earlier. The Kyoto Protocol, an amendment to the United Nations Framework Convention on Climate Change, was negotiated in Kyoto, Japan, and signed by many countries worldwide (192 to date) to reduce greenhouse gas emissions. The bases of the protocol that the group of scientists rejected were: (1) there is a scientific consensus that global warming is occurring; and (2) it is extremely likely that human-made CO2 emissions have predominantly caused it. The petition, organized by Art Robinson, president of the Oregon Institute of Science and Medicine, has more than 31,000 signatories, including 9,029 from people with PhDs and 7,157 from people with master of science degrees. Below is the petition in its entirety.

We urge the United States government to reject the global warming agreement that was written in Kyoto, Japan in December, 1997, and any other similar proposals. The proposed limits on greenhouse gases would harm the environment, hinder the advance of science and technology, and damage the health and welfare of mankind.

There is no convincing scientific evidence that human release of carbon dioxide, methane, or other greenhouse gases is causing or will, in the foreseeable future, cause catastrophic heating of the Earth’s atmosphere and disruption of the Earth’s climate. Moreover, there is substantial scientific evidence that increases in atmospheric carbon dioxide produce many beneficial effects upon the natural plant and animal environments of the Earth.

I’ve written about Jay Lehr’s theory before, but I think it’s worthy of repeating. The alarmists claim the warmer temperatures are causing the CO2 levels to rise to “dangerous levels.” But which came first, the chicken or the egg? Lehr, a PhD and the science director at The Heartland Institute, believes they have it backwards. Dr. Lehr insists that historical data shows, in the up and down cycles we have always experienced on earth, the temperature has always risen first, then the CO2 level in the atmosphere.

The Climate Alarmists’ Arguments are Losing Their “Fizz”

To illustrate this point, he uses the practical example of opening a cold carbonated beverage and leaving it out for a while. As it warms, all the “fizz” of the carbonation dissipates because cold liquid holds more CO2 than warm liquid. Thus, as the oceans warm in a warming cycle, CO2 disperses out of the water and into the atmosphere. And furthermore, Lehr believes when the rising levels of CO2 do occur, it has a positive impact, as crops flourish with exponentially greater yields. In the Netherlands, farmers are pumping additional CO2 into their tulip greenhouses.

To attempt to make a connection between Hurricane Ian and climate change to score some political points is not only ridiculous, but to do so in the immediate aftermath of the worst disaster in Florida’s history is extremely callous and certainly offensive to Floridians. An estimated 2.5 million homes and businesses in twelve counties are without electricity.

Let us look to the Repairer of the Breach (Isaiah 58:12) and continue to pray for the state of Florida, Governor DeSantis, the mayors, the some 42,000 linemen and all the first responders.