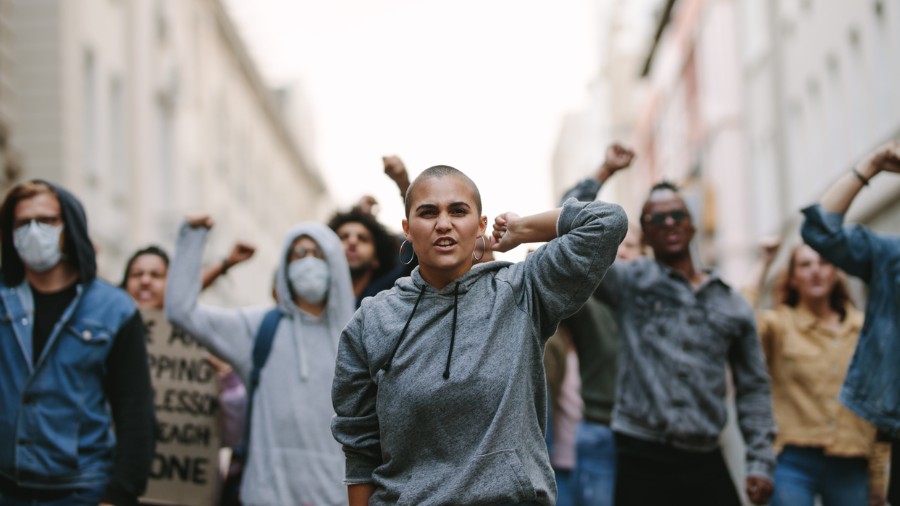 Why are so many Americans now expressing such deep concerns about racism? Why are they so angered about police brutality? Why are they so willing to ask larger questions about justice and equity? Is it because they finally “get it,” that they now understand what Black Americans have been saying for years? In some cases, the answer is yes, and that is positive. But in the vast majority of cases, I do not believe that’s it at all. There are other reasons afoot.

As I tweeted on July 1, “I do not believe that, suddenly, tens of millions of Americans have grown a conscience about racism. Some certainly have. But for most, I believe it’s merely the PC flavor of the day, the latest way to bash America, and thus, the opposite of genuine moral concern. Do you agree?”

Based on the response to the tweet, the overwhelming answer to my question was, “Yes, we agree.”

The Spirit of the Times

Tens of millions of Americans have not suddenly grown a conscience about the past, feeling pangs of guilt and saying, “The system is still broken, and we must fix it.”

Are they just now figuring things out?

Tens of millions of Americans have not suddenly become concerned about the evils of racism or, for the first time, come to grips with the darker sides of our national history.

Or is there a massive wave of virtue signaling? (This a term I hate to use, but it certainly applies.) Is there an all-too-obvious fawning to the crowd?

Deeper still, is this simply an embracing of the latest anti-American narrative, the latest nation-bashing trend? Is being woke on racism the latest manifestation of PC-mania? (How bizarre that the new sign of devotion to America is hatred of America.)

For some, perhaps subconsciously, this is a way to get at Trump. He’s for law and order, we’re for anarchy. This is a reelection year, riots in the streets make him look bad. (For more on this, see here.) Or, even more simply, we’re against law and order because we are rebellious. The death of George Floyd is merely our pretense for disruptive action.

This is also why anti-Israel, Day of Rage rallies on July 1 merged together themes of Jew-hatred and hatred of the police, since both allegedly represents symbols of oppression. And both of these themes merged together with the Black Lives Matter mantra.

As reported by the Blaze, “Black Lives Matter protesters marching through Washington, D.C., on Wednesday were captured on video chanting, ‘Israel we know you, you murder children too.’”

Over in New York City, Memri TV documented some of the inflammatory speech at the Day of Rage gathering protesting the potential annexation of parts of Judea and Samaria (aka the West Bank).

“European Jews” are the “Relatives” of Slave Holders, Day of Rage Speaker Said

He continued, “When I saw that precinct burn, I thought I was closer to Palestine. When I see an NYPD cop car burn — I say we are waking up a revolutionary country.” (Yes, burn those buildings and those cars, maybe with some cops inside too!)

Yet another speaker, herself the former wife of a Black Panther leader, put it all together: “The European Jews, who occupy, slaughter, and continue to force millions of Palestinians on to their killing fields, called refugee and concentration camps, are the relatives of the Europeans, the Spanish, the British, the Portuguese, the Irish, the Dutch, who kidnapped, slaughtered, and forced millions of Africans and indigenous on to slave ships, plantations, reservations, prison death camps, on this Turtle Island [North America].”

To quote one more speaker: “The United States of America and all of its puppet governments will be no more!”

It is this same anti-Americanism, rather than a true rejection of racism and racist structures, that fuels the fires of the many of the woke protesters. And when the rubber meets the road, very few of them will prove willing to make personal sacrifices to better the life of a Black person in another part of the country. (Speaking of that, does anyone take seriously the NBA’s social conscience and deep concern for justice in America when it remains cozily in bed with Communist China?)

Ben Shapiro was right when he wrote, “The product of the woke crusade will not be a less racist America but a more polarized one. That’s because the woke crusade is not truly about reducing racism; it is about attacking fundamental institutions, American history, and our very culture of rights. All the things we share must be eviscerated. So we will share nothing. And then the true ugliness begins.”

The truth be told, we are not as woke as we think we are. When the dust settles, there will be an even angrier America with even deeper racial problems. A better solution will have to be found, one that truly changes hearts and minds. Sounds like it’s time for the gospel!