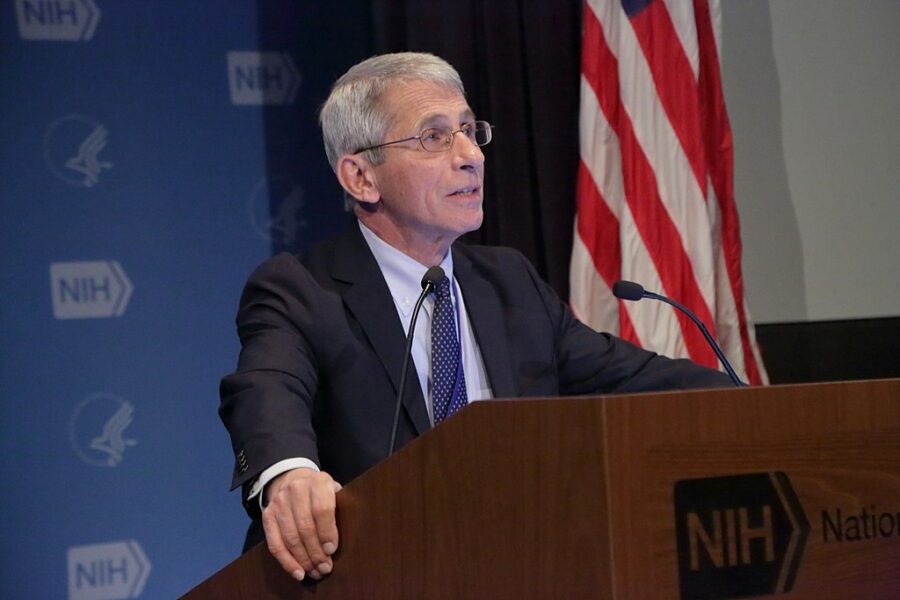 Fauci, perhaps more than any other federal official, is responsible for the United States having the world’s largest death toll from COVID-19. This despite lockdowns, social distancing, mask mandates and vaccine mandates.

Yet Fauci knew that none of those measures would work, as a new book reveals.

Robert F. Kennedy, Jr. exposes Fauci’s corruption and incompetence in The Real Anthony Fauci: Bill Gates, Big Pharma and the Global War against Democracy and Public Health. Kennedy details the ongoing collusion between the federal government and pharmaceutical firms, collusion that Fauci devised to enrich himself and his allies.

That collusion even governed Fauci’s handling of the AIDS crisis during the 1980s, which the book explores in depth.

In Bed with Big Pharma

Fauci “implemented a system of dysfunctional conflicts and a transactional culture” that not only turned his National Institute for Allergy and Infectious Diseases into “a seamless appendage of Big Pharma,” Kennedy wrote. It corrupted the Centers for Disease Control, the National Institutes of Health, the Food and Drug Administration, even the World Health Organization.

Consequently, Americans are “among the least healthy citizens on the planet,” Kennedy wrote.

“The book claims that the financial entanglements he has orchestrated over his 50 years in power have always led him to prioritize medical interventions, or products, or vaccines, or drugs that make a lot of money for a pharmaceutical company, and that are protected by patents, rather than anything that might be cheaper and readily available,” Kennedy’s publisher, Tony Lyons of Skyhorse Publishing told The Stream.

“So by not prioritizing public health,” Lyons added, “he has led to a situation where people are misled, and where they don’t really know or have access to information that could be helpful to them.”

For example, Kennedy wrote, to protect their own financial investments, Fauci, Gates and their allies went so far as to rig trials and industry studies of any drugs — such as Hydroxychloroquine — that could fight COVID-19 effectively without a patent.

Those financial investments are considerable.

Fauci’s NIAID jointly owns the patent for Moderna’s mRNA vaccine, which received $6 billion in taxpayer funding from the agency. As a result, the NIAID “stands to collect a fortune in royalties,” Kennedy wrote. “At least four of Fauci’s hand-picked deputies are in line to collect royalties of $150,000/year based on Moderna’s success, and that’s on top of the salaries already paid by the American public.”

The NIAID’s relationship with Moderna is just one of many between Fauci and pharmaceutical giants that the book chronicles with more than 2,000 citations. It even includes QR codes to provide the latest information that has emerged since publication.

From Software Inventor to “Billionaire Sociopath”

Gates, Microsoft’s co-founder, has no training either in medicine or epidemiology, Fauci’s specialty. Yet Kennedy describes how Gates foisted himself and his wealth into the discussion by providing massive funding for the World Health Organization and other health agencies to do his bidding.

“By 2020,” Kennedy wrote, “Bill Gates exercised firm control over WHO and deployed the agency in his effort to discredit (Hydroxychloroquine).”

Kennedy cites a $48 billion joint project between Gates and Fauci to promote COVID-19 vaccines and Remdesivir, an anti-COVID drug in which Gates has a huge financial interest.

Gates also tries to manipulate information for his purposes. As The Stream reported last year, the Bill & Melinda Gates Foundation provides more than $250 million in grants to such outlets as NBC, BBC, Gannett and Financial Times. The foundation also trains journalists and provides content through third parties. As a result, those outlets promote Gates as an expert on COVID-19. The Washington Post even published an op-ed Gates wrote to discourage Hydroxychloroquine.

“At this fateful juncture, we must therefore choose,” Lawrie said. “Will we continue to be held ransom by corrupt organizations, health authorities, Big Pharma and billionaire sociopaths or will we do our moral and professional duty to do no harm and always do the best for those in our care?”

Fauci exploits his own contacts in both the mainstream media and social media to protect and promote his agenda.

“E-mail traffic shows that Dr. Fauci colluded directly with Mark Zuckerberg and the social media platforms to censor doctors who reported vaccine failures, harms, and deaths, to deplatform public health advocates like myself, and to evict and muzzle patients who reported their own injuries,” Kennedy wrote. “As a federal official sworn for four decades to uphold the Constitution, Dr. Fauci should have been the champion of free speech and vigorous debate during the pandemic.”

One platform, Google, not only “has lucrative partnerships with all the vaccine manufacturers,” Kennedy wrote. Alphabet, which owns Google, also owns several vaccine companies.

Since Fauci and pharmaceutical firms share the same agenda, those businesses help by intensifying their domination of respected medical journals to destroy Hydroxychloroquine’s credibility. That includes The Lancet, the New England Journal of Medicine and the Journal of the American Medical Association.

“It is no longer controversial to acknowledge that drug makers rigorously control medical publishing and that The Lancet, NEJM and JAMA are utterly corrupted instruments of Pharma,” Kennedy wrote. “The Lancet editor, Richard Horton, confirms, ‘Journals have devolved into information laundering operations for the pharmaceutical industry.’ “

For Lyons, the implications are obvious … and frightening.

“He would vilify anybody who disagreed with him,” Lyons said about Fauci, who routinely declares that anybody who disputes him opposes science. “So by doing that, he not only was trying to maximize his own power. He was making it difficult for there to be scientific progress, because for scientific progress, you need to have competing points of view.

“It has to be possible, for example, for doctors and scientists to publish dissenting views in scientific journals, and for investigative journalists to disagree with, for example, the CDC or the NIH. Doctors and scientists are prevented from publishing dissenting views and investigative journalists are working at newspapers that refuse to allow them to really investigate things, like this book (has), that haven’t been covered in any newspaper at all.

“So in a democracy, you have to be allowed to question and there has to be a role for dissent. If you take out that role, then what you have is not a democracy anymore.”

Perhaps the most fascinating insight into Fauci’s personality comes at the end of the book. It’s a chart similar to the kind that appears during “March Madness,” the NCAA men’s basketball tournament, with brackets for fans to fill out their choices.

Fauci designed the chart, chose “COVID-19” as the winner against such diseases as Zika and SARS, and signed it “Tony F.”

In other words, the chart and Kennedy’s book show “America’s Doctor” to be America’s Mad Scientist.