The Public is Losing Confidence in Public Education 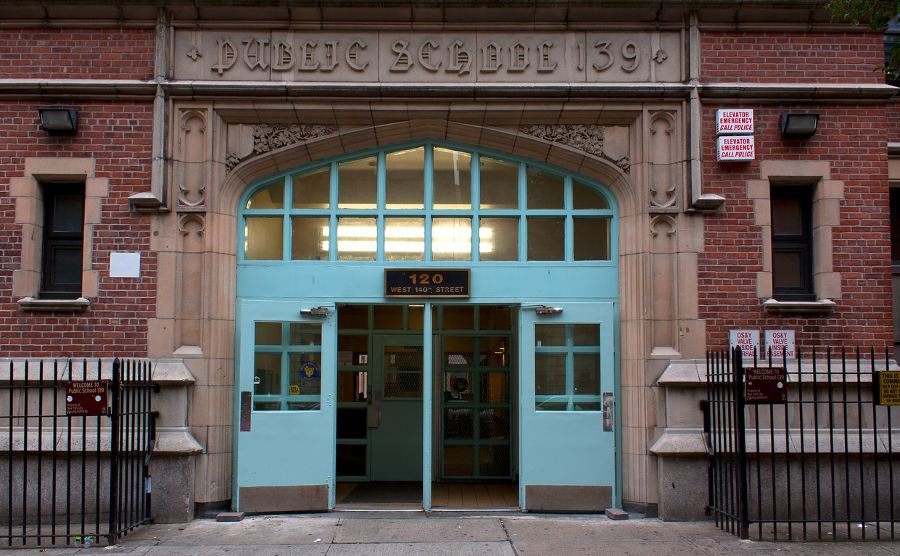 Just how frustrated are ordinary Americans with their public schools? We know it was pivotal in the Virginia’s governor race. It played a role in Arizona’s new universal K-12 school choice law. We’ve seen Tennessee rapidly expand their charter school options. Is there a groundswell happening nationwide?

A new Gallup poll suggests there is strong bipartisan lack of confidence in public schools. Even among Democrats: 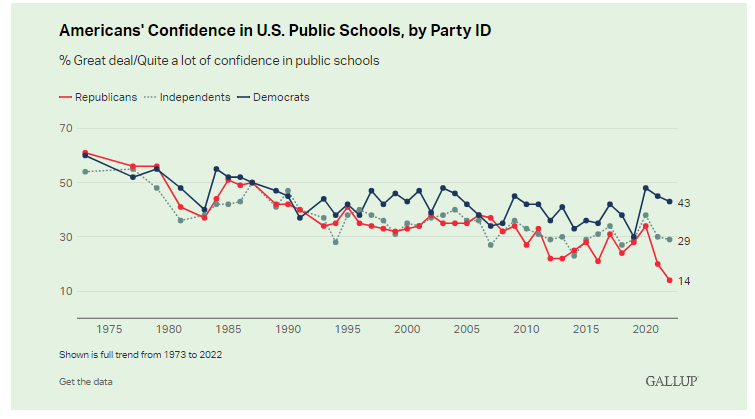 It’s not just one thing. There’s a spate of news stories driving this trend. Even in red states.

In Virginia, it wasn’t just the CRT taught in schools thing. It was Scott Smith’s 15-year-old daughter being sexually assaulted by a transgender student in a girl’s bathroom. And the district trying to cover it up.

Virginia’s a blue-leaning state. But the transgender movement has support even in red states. Last June Good Shepherd Lutheran Church in Fayetteville, Arkansas, began a trend of sponsoring gender-transition closets in schools. The idea is you come to school in clothing that your parents approve. But then you change into another set of clothing, consistent with your preferred gender identity.

Florida’s public-school enrollment is now just 0.9% below their 2020 level

An obvious problem is that parents aren’t necessarily notified when schools set up these closets. After all, if Mom and Dad were on board, the children could get their preferred clothing at home, right? So, you’ve got tax-funded employees encouraging minors to try on alternative gender identities without parental awareness. Seems like a form of grooming.

Yet it’s spread elsewhere. Last week Rock Bridge High School in Columbia, Missouri, announced it approved $10,000 in funding from the It Gets Better Project to start a transition closet. The rationale behind this approach is that any non-affirmation of a child’s gender preference could lead to depression or suicidal ideation.

Apart from the women’s safety issue — Scott Smith’s daughter — and the fairness in sports issue, this approach neglects the reality that many children, if allowed to start transitioning, later seek to detransition. It’s a potentially messy and challenging process. The initial transitioning actions come with long-term risks and aren’t always reversible. The body only has so much plasticity. (Stories of young people publicly regretting their transition grow by the day.)

The go-behind-the-parents’-backs on transgender or racial teaching is one piece of a larger picture — an increased sense that public schools have lost their way. Test scores are dropping. Unruly behavior and violence are on the rise. Teachers are calling in sick at higher frequencies, quitting or planning to retire early. Substitutes are harder to find. Districts are short on bus drivers. Some are doubling up on routes, forcing later starts to the school day.

When job openings are posted, they are going unfilled. That’s happening in other industries, too, but teacher morale seems especially low. In 2016, there were 1.06 people hired for every public-school job listing. Now it’s 0.59 — meaning almost half of job openings are not filled. In 2013, there were 557,320 substitute teachers. In 2020, it was just 415,510 — a 25% drop. Probably fewer for this coming Fall.

Take test scores, as an example. The i-Ready assessments test students three times per year in reading and math. These tests are widely used at the K-8 level. In the fall of 2021, 38% of 3rd graders were below grade level in reading. Historically, it’s 31%. In math, it was 39% below grade level. The historical average is 29%.

When the pandemic hit, wealthier students had more options. Emma Dorn, a researcher at McKinsey and Company, has described it as a “K-shaped” recovery. Kids in wealthier families have rebounded nicely. But those in lower-income homes have continued to decline.

This combination of trends is leading to a steady erosion in enrollment away from public schools and towards charter schools, private schools and homeschooling. New York City schools are projecting enrollment losses of 30,000 students for this Fall — on top of previous year losses. They’re looking at north of 120,000 students lost over the past 5 years. Of course, some of that is family relocation: People have been leaving New York City. 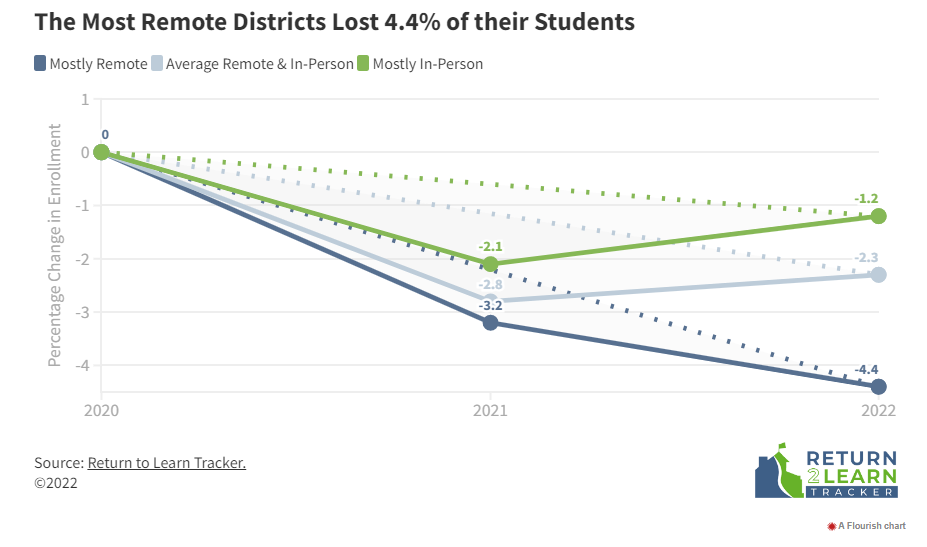 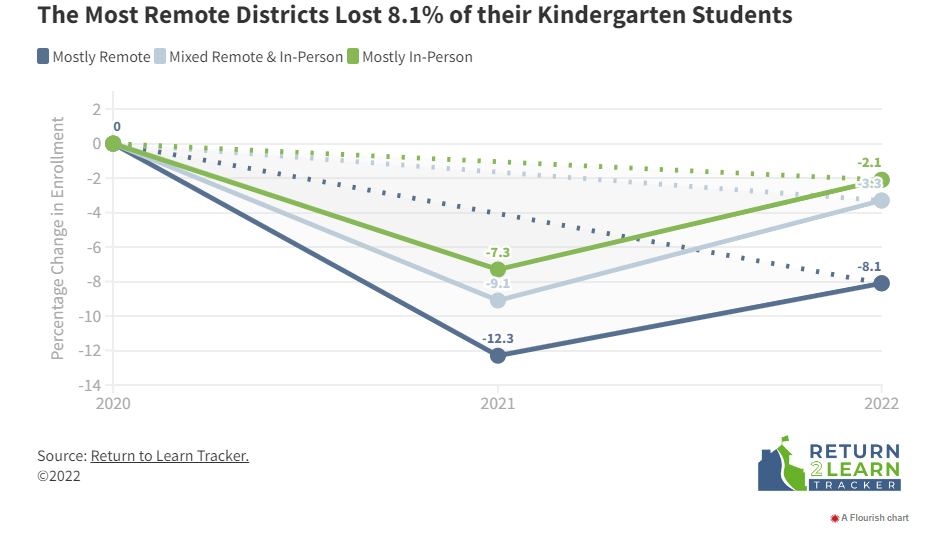 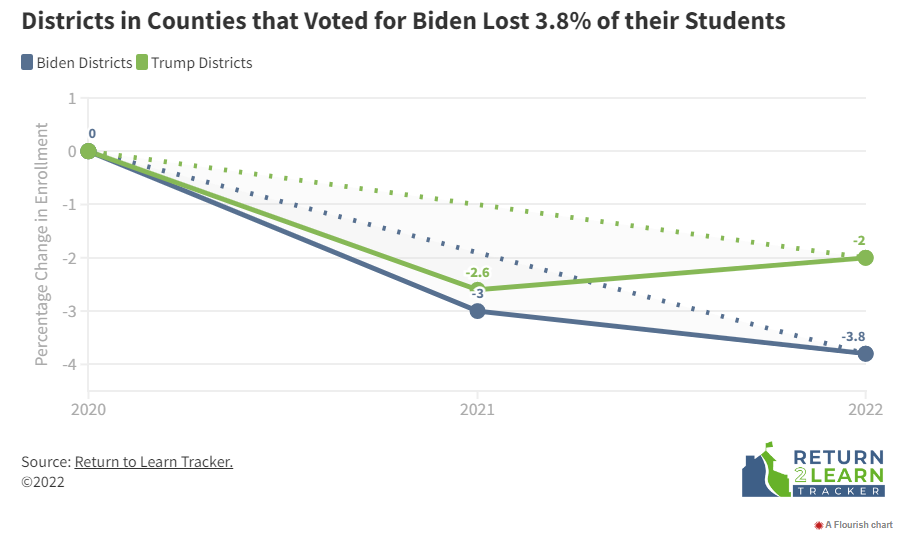 How about mask mandates? Similar: 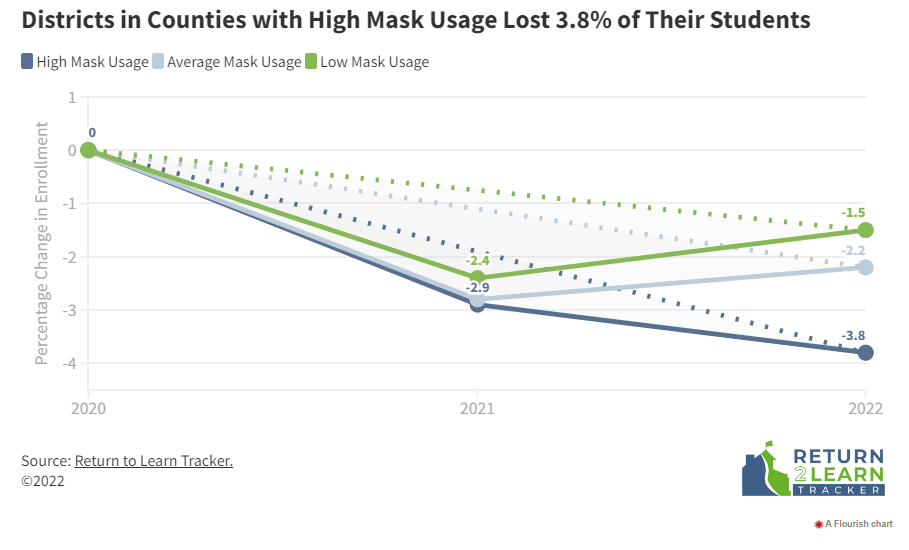 How did Governor DeSantis do in Florida? He was one of the only governors to bet hard on school reopening and no masking. For 2021, Florida’s schools saw a 2.2% enrollment decrease, similar to other states that returned to mostly in-person learning. But for 2022, Florida saw a higher-than-average rebound. Florida’s public-school enrollment is now just 0.9% below their 2020 level — better than the 1.2% drop for other mostly in-person learning areas. You can expect this to be a big issue in 2022 and 2024.