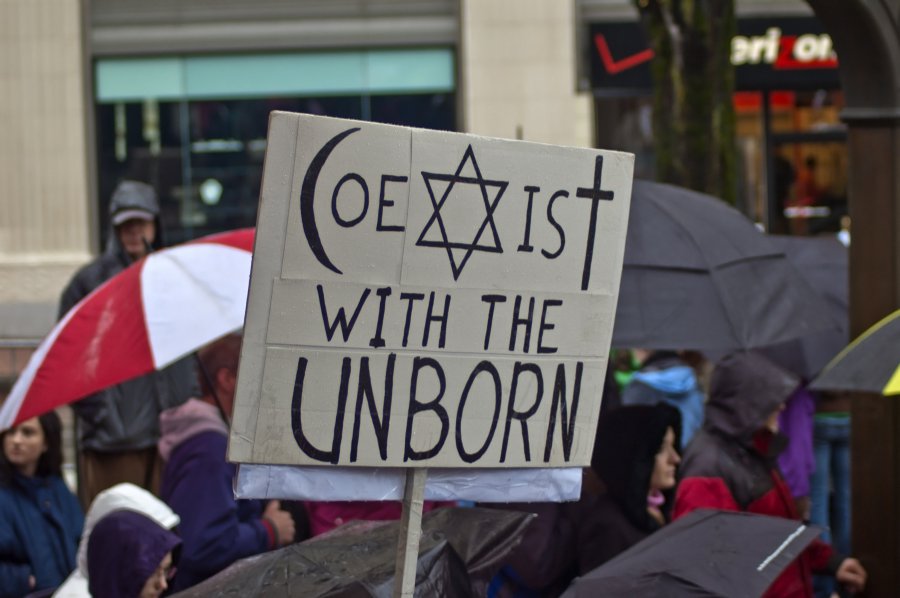 “She, I think and feel, should choose her own path,” the tweet began. The “she” is the Texas high school valedictorian Paxton Smith. She’d achieved brief national fame for springing on the people gathered at the graduation an attack on the state’s new abortion law. She’d said she was “terrified” that she might get pregnant and not be able to abort her baby, because she thought her life would be ruined.

I’d commended an article by another high achiever, the pro-life scholar Jacqueline Abernathy. Her article in the Catholic Herald was titled “Why Listen to the Misogynists, Paxton? A Woman Doesn’t Need Abortion to Succeed.” She argued that a woman with an unexpected pregnancy can still succeed in life, without killing her baby.

“Who convinced you that we as women are so weak that we have to oppress our own offspring if we want to achieve something in life?” she asked Smith. “What misogynist lied to you? And why did you believe it? Look around. Evidence to the contrary is everywhere. I’m not saying that becoming pregnant at a young age is good, that it is no big deal to try to raise a child before you are ready and without a partner in life. What I’m saying is that abortion is not the solution to those struggles.”

@LnowMr, using the name ‘auqalelac ‘I DISSENT'” continued the tweet: “Yes, she can succeed if she has a baby before she could afford parenthood, but, she deserves the option, doesn’t she?”

I responded: “No, not when it involves the death of another human being. None of us deserve that option.” The tweeter came unglued.

“That’s it,” he or she responded. “I’ve heard enough dumb today. You are just trying to force your antiquated views on the whole of society.”

Auqalelac wasn’t going to stop. “Don’t worry, though,” went the next tweet, posted an hour later. “Our democracy is fast turning into an authoritarian society not unlike the catholic church. Again, three new Supreme Court Justices to rule in favor of authoritarian rule. But does the end justify the means?”

The next tweet was a chart giving the results of the last presidential election. Both the popular vote totals and the electoral vote totals, with percentages. And the one after that said “Do you really understand that?”

Then the tweets stopped. It turns out that Auqalelac deleted the whole account. (Fortunately, I’d screenshotted the exchange.)

You get used to people insulting you on social media. Your critics usually call you dumb, because this kind of critic can’t imagine you may be intelligent and wrong. You disagree with them, you must be stupid. Or evil. You could be evil, but they hit you with that charge less often.

But I don’t bring up the exchange because someone who makes dumb arguments called me dumb. Every movement has people like Auqalelac “I DISSENT!” People whose grasp of logic isn’t as great as they think it is, but who — embarrassing their allies — employ their limited abilities with great confidence. We’ve all got them. Whatever you believe, here you’re living in a glass house.

What I am interested in is this idea that my statement that no one deserves the option to kill another human being is “antiquated.” Pro-choicers claim we’re behind the times when we defend the unborn.

I  responded to that tweet with two tweets. In the first I said: “I believe a human being deserves the full protection of the law, including the right to live. What is antiquated about that? That the unborn child is a human being is a scientific fact, which modern science has only made *more* clear.”

In the second, I appealed to what I assumed was my critic’s own political commitments. I said: “The extension of the law’s protection to every group of people, esp the marginalized, is a modern commitment, or at least an aspiration. It’s in particular a mark of the left. ‘Antiquated’ is the last thing protecting the unborn is.”

There are the facts, and there are the ways we understand the facts. The facts all support my claim. All of them. As I told Auqalalac, today we have indisputable scientific evidence for the self-evident fact that the unborn is a human being. From the moment of her conception, the child has her own unique DNA. It will guide her development from two-cell zygote to a human being with a human brain, arms, legs, eyes, nose, and so on. What she is after she’s born, she was when she was conceived. 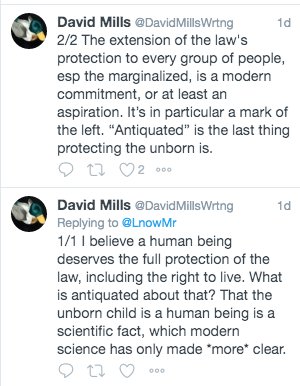 Of course some people deny the facts. They either can’t see the facts — though I find that hard to believe — or they refuse to look at the facts, or they lie to themselves about them, or they don’t care. Or — sorry to bring this up — they really are dumb. (See the work of Secular Pro-Life I described in How to Defeat Dumb Pro-Choice Memes.)

But still, the facts all support my claim. It’s not “antiquated” on scientific grounds. It’s as modern as you can get.

The Liberal Knows This

The ways we understand the facts, that’s trickier. But here’s the thing, the way the average modern American liberal understands the world also supports my claim. The protection of the marginalized and vulnerable is, as I say, a particular commitment of the left. It isn’t just a conservative cause. See, for example, the work of Democrats for Life. Or Secular Pro-Life. Or the Pro-Life Alliance of Gays and Lesbians +. Indeed, the pro-life movement began as a liberal crusade for human rights. See Daniel K. Williams’ book Defenders of the Unborn.

The liberal declares “Black lives matter” because he believes they have not mattered, or mattered as much as other people’s. He insists they are as human as anyone else and should be treated that way. Our nation’s history shows that black lives have not mattered as much as white lives, from slavery, through the century of Jim Crow, through the Civil Rights movement and after.

The liberal believes in protecting the marginalized and vulnerable. No one is as vulnerable as the unborn child, and almost no one is as marginalized. They are the only group of human beings the law does not protect, at least if they’re unwanted.

To protect them is the exact opposite of antiquated. It’s very modern. It’s based on science and advanced thinking. And it’s more modern than most American liberals, unfortunately for the unborn.

David Mills is a senior editor of The Stream. After teaching writing in a seminary, he has been editor of Touchstone and the executive editor of First Things. He writes the monthly “Last Things” column for the New Oxford Review. His previous article was How to Defeat Dumb Pro-Choice Memes, describing the work of Secular Pro-Life.