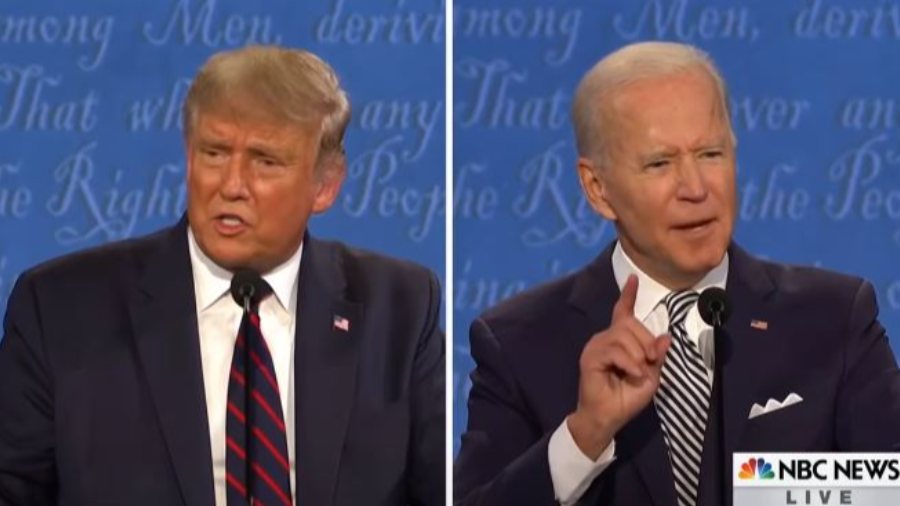 Things got ugly fast and they stayed ugly until the end. That’s why headlines from both the left and right spoke of “chaos” and a “circus” and a “bitter shouting match.” As I tweeted early on, “I have heard family arguments that were more mature and civil than this. Unreal.” And then later, “There’s so much dirt flying it’s hard not to feel dirty just watching.”

Over at Red State, Joe Cunningham put it like this: “This is a hard one, folks. Time and again, this debate proved to me that this is a terrifying time to be alive. Two old men shouting at each other while a third old man tries to get them to stop shouting at each other? Watching this debate was a type of self-destructive behavior that I’ll be recovering from for a while, I think.”

Howard Kurtz on Fox News said: “It was the presidential debate as barroom brawl, as television shoutfest, as exhausting insult derby.” Over on CNN, Chris Cillizza stated: “It was, without question, the single worst debate I have ever covered in my two decades of doing this job.”

The sad thing, though, is that the debate was a microcosm of the state of America. We are gravely divided. We are nasty. We burn bridges rather than build them. We don’t trust anyone that is not in our camp. We are deeply suspicious. Everyone seems biased.

And are there any national, unifying voices? Sadly, there are not.

As for the debate itself, there were clear misses on each side (and I say this as someone with decades of experience in public debates).

When you refuse to answer a head-on question (like Biden refusing to answer whether he would pack the Supreme Court if elected), you lose. When you do not expose a blatant lie told about you (like Trump failing to refute the “very fine people” Charlottesville lie), you lose. When you constantly interrupt, you lose (Trump started it, Biden joined in, Wallace added to the confusion).

But in the end, regardless of who you think won or lost the debate, we all lost.

Many of my Twitter followers agreed, as indicated by the responses to a post-debate poll which asked, “Who won the debate tonight in your opinion?”

As of this writing, about two hours after the conclusion of the debate, the responses were: Biden, 8.6 percent; Trump, 37.2 percent; Neither, 20.1 percent; America lost, 34.1 percent.

So, even among a largely conservative Christian voting base (meaning, those following me on Twitter), almost as many said that “America lost” as said that Trump won.

The overall conduct of both candidates was inappropriate, unnecessary, and at times disgraceful.

And again, I say this as public debater myself. You do not need to retaliate and break the rules. In fact, the lower your opponent goes, the higher ground you should take. It makes you look better and your opponent look worse. When you get down in the mud together, you lose your dignity in the process.

It’s true that Trump had more “gotcha” moments than Biden — as documented here — but still, this was a tough debate to watch, especially when all three were talking at the same time. (When I asked on Twitter, “Who is being more civil in the debate?,” the answers were: Trump, 18.9 percent; Biden, 21.7 percent; Neither, 57.9 percent; Both, 1.4 percent.)

All that being said, there are many issues from the debate that need to be unpacked.

What of Biden’s attacks on Amy Coney Barrett? What of Trump’s response to the question about white supremacist militias? Will Biden’s renunciation of the Green New Deal and the defunding of the police hurt him with the radical left? Will Trump’s touting of his handling of COVID-19 turn undecided voters off? These are just a sampling of the questions that must be asked.

As for Chris Wallace’s handling of the debate, while he definitely had to combat Trump’s interruptions more than Biden’s, he did seem to scold Trump like a child while also failing to challenge Biden for his evasive answers the way he challenged Trump. On a certain level, his reputation might end up taking the biggest hit of them all. As for how Wallace could have done a better job of keeping control, that is easier said than done.

What Really Mattered Got Lost

When it came to the actual substance of the answers, I felt Trump did much better than Biden. When it came to behavior, while Biden may have been nastier in terms of name-calling (“racist”; “clown”; “liar”; “shut up”), I felt that Trump’s incessant interrupting made him look worse. Even the way Biden answered the final question about accepting the outcome of the elections made him seem more reasonable. Yet Trump has good reason for questioning whether he can expect fair play in the days ahead.

Ultimately, I tweeted, “Tonight’s debate reminded me again that there is a LOT I don’t like about the way @realDonaldTrump handles himself, but hands down, he gets my vote for policies — as well as gets my vote against the Democratic policies.”

Unfortunately, with the name calling and insult flinging, what really mattered most got lost, namely, the diametrically opposed policies of these two candidates and parties. Hopefully, that will be the greater focus in the days ahead.

As for watching two more debates, I’ve lost my appetite right now. As for reflecting on this debate as being a snapshot of America today, that’s what grieves me the most.