According to ESPN, in the 24 hours since the announcement, Carl Nassib's jersey sales rocketed to number one in the NFL. 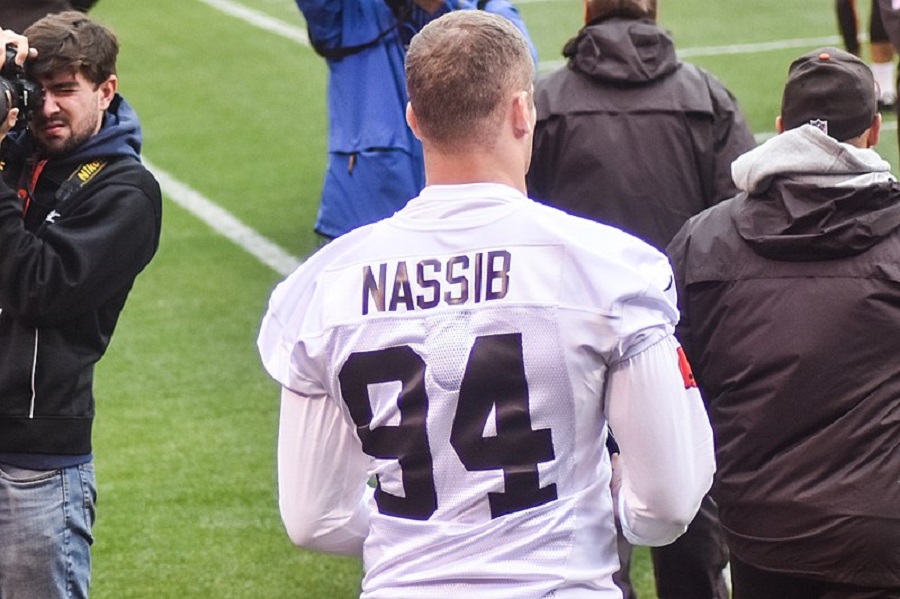 “I just want to take a quick moment to say that I’m gay,” Carl Nassib said in a video posted to his Instagram account.

Many of arguments supporting the LBGTQ+ agenda make all the sense in the world. Their world.

Expecting those who don’t know Jesus to understand Christians’ version of morality is nonsensical. Christians are truly from another world, one that is foreign to them. Those who have not had a dramatic, life-altering encounter with God simply have no grid for much of what we believe. To them, loving another person of the same sex is clearly and obviously a positive thing to do. It makes sense to surrender to their sexual desires when they truly feel they were born that way. What we would call unnatural is natural to them, and vice versa.

This isn’t just about which world one prefers. If God is real, as Christians know Him to be, there is only one real world. Their world is a false one.

Still, in today’s post-Christian culture, it should not surprise us that jersey sales spiked after Nassib’s revelation that he’s been a practicing homosexual for years. Homosexuality is but one of many behaviors and ideologies that have been normalized. To those who don’t subscribe to the teachings of the Bible, there is no moral prohibition for these beliefs.

Legislated morality is based on what society as a whole accepts and rejects. This is why murder is still a crime and why gay marriage is no longer illegal. America has spoken, and while it may have been the squeaky wheel that forced this shift, homosexuality is legal and not only widely accepted but promoted aggressively. June is Pride month, after all.

The Normalization of Sin

Scripture tells us not all sin is the same. Blasphemy of the Holy Spirit, for example, is unforgivable. Other sins are “not unto death.” Sexual sin has greater consequences than others. It’s no small thing to embrace, promote or to secretly participate in any type of sexual sin.

We as believers have watched the normalization of the sexual sin of homosexuality overtake our nation. It’s a dangerous and deadly trend that is imprisoning innumerable people who previously may have surrendered to Jesus. Now, in their minds and the minds of those who influence them, there is nothing to repent for.

Now, we must talk about the challenge of addressing this moral pandemic.

According to Scripture, there is little difference between an unbeliever practicing homosexuality and a Christian entertaining sexual lust. In fact, the violation is probably greater for the believer than for the unbeliever. Judgment begins in the house of God.

The moment we look at an attractive person walking down the street and imagine them in a sexual, undressed fashion, we have committed adultery. I’m not even talking about the massive proportion of Christians, and even pastors, who watch pornography. I’m not referring to the many sexual affairs that Christians fall into. I’m not addressing unmarried couples who are followers of Jesus yet living together. I’m talking about the most basic, common sexual sin known to man: lust.

If we imagine it, we have done it. The sin of lust has long been normalized. In fact, a “Christian” sex therapist rebuked me after writing an article dealing with sexual lust several years ago. They declared sexual lust is healthy and even prescribed by their office as a help for Christian married couples. Shocking.

The Militarization of Sin

It’s easy to see how the normalization of homosexuality has come as a result of a militarized effort to force its acceptance. Just as the pro-abortion crowd has worked tirelessly to eradicate obstacles to their cause, homosexual activists have been brash and unapologetic in their mission to effect change in the sexual norms of America.

I believe it’s appropriate to resist them directly and without apology. Christians must not remain silent. We must pray, get involved politically, preach peacefully protest, write, and sound alarms. Our children are in the cross-hairs of a clear and present danger.

We will have no supernatural backing, however, and no spiritual authority to confront this invading spirit unless we have conquered our own normalized sins. If we lust, if we play around with any type of sin, whether it’s greed, hatred, lying or our own heterosexual version of fornication, we don’t stand a chance.

If we don’t know how to fight with a heart of love and without hating our enemies, we will lose. If we want to take our enemy out instead of welcoming them into our camp as redeemed, sanctified, washed-in-the-blood new brothers and sisters, we should stand down. We will do more damage than good.

The Struggle of Sin

Carl Nassib is simply one of millions who are struggling. Outside of an authentic Christian worldview, Nassib and others have absolutely no grid for holiness. It doesn’t make sense.

Nassib and others like him should feel the love of Christians, not their disgust. He may not know it, but there is joy, abundant life and eternal freedom that would blow his mind if he only had a legitimate encounter with Jesus.

We must model a life of holiness and love if we hope for people like Nassib to find Jesus. We must understand the difference between the militarization, normalization and struggle of sin. Our response must match the situation.