No matter how bad this story gets, the governor refuses to resign. 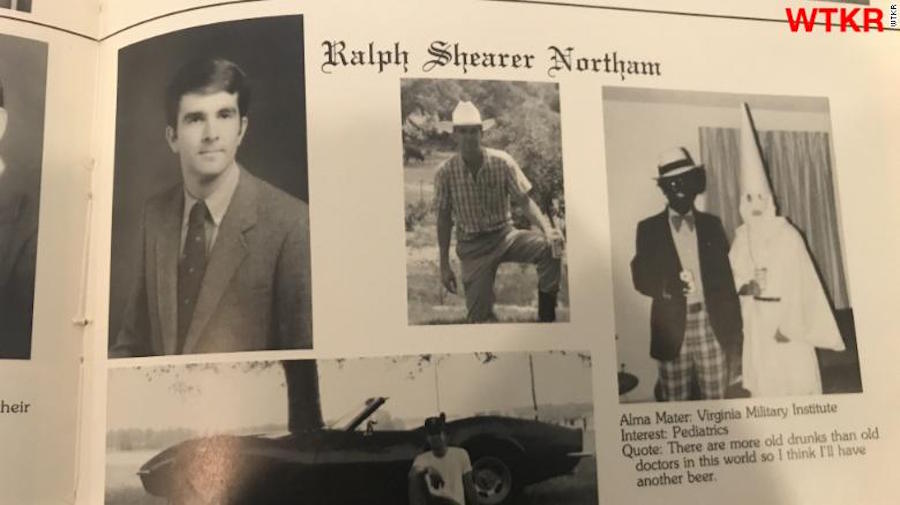 By Rachel Alexander Published on February 6, 2019 •

UPDATE: Since this article came out earlier this morning, Virginia’s Democratic Attorney General Mark Herring, second in line to replace Gov. Northam after Lieutenant Governor Justin Fairfax, has admitted to wearing blackface at a college party in 1980.

When those on the right get caught wearing blackface or joking about it, they lose their jobs. Public outrage forced Florida Republican Secretary of State Mike Ertel to resign after a 2005 photo surfaced of him dressed as a Hurricane Katrina survivor in blackface. NBC fired talk show host Megyn Kelly after she defended childhood Halloween blackface costumes on the air.

But when those on the left do the same thing, it’s a different story — so far. Virginia’s Democratic governor Ralph Northam has a photo in his 1984 medical school yearbook of one person wearing wearing blackface and the other a KKK robe. One of them is assumed to be him. Whichever one is the governor, it’s bad.

For more on Gov. Northam, see Al Perrotta’s Gov. Northam’s Racist Yearbook … and His True Sin and Rob Schwarzwalder’s Democrats Outraged Against Gov. Northam — For Only Half the Right Reasons.

And it gets worse. His military school yearbook, published 4 years earlier, said he had the nickname “Coonman.” “Coon” is a racist term for blacks.

Northam hasn’t resigned. Every Democrat would demand he resign if he was a Republican. But since he’s a Democrat, well, the party has mixed feelings.

The Photo
Big League Politics first published the yearbook photo. Editor Patrick Howley said he received the photo from someone upset with Northam’s saying he would sign a law legalizing late-term abortions. Northam appeared to advocate for infanticide.

Changing Apologies
Northam started apologizing. As he did, his story changed. On Friday, he admitted that it was him in one of the photos. He apologized on February 1 for “the decision I made to appear as I did in this photo and for the hurt that decision caused then and now.” He admitted the costume “is clearly racist and offensive.” He also claimed he didn’t know how he got the nickname “Coonman.” No one believes him.

But even after admitting all that, he didn’t resign.

Northam held a press conference the next day. He changed his story. He claimed he was not one of the two in costume. “I believe now and then that I am not either of the people in this photo,” he said. “This was not me in that picture. That was not Ralph Northam.” If he told the truth on Saturday, he had lied on Friday. And if he told the truth on Friday, he lied on Saturday. And no one believes him.

But he didn’t resign.

It gets weirder. He also admitted he darkened his skin to portray Michael Jackson in a dance contest in 1984. This didn’t help. It just dug a deeper hole. Everyone across the board objects to blackface, regardless of the reason. Whites used blackface to ridicule blacks in the earlier part of last century. Among many others, the NAACP demanded he resign.

But he didn’t resign.

Free Pass From Democrats
Instead, Northam claimed that his action “is not in keeping with who I am today and the values I have fought for throughout my career in the military, in medicine, and in public service.” He knew “it will take time and serious effort to heal the damage this conduct has caused. I am ready to do that important work.” He offered “my sincerest apology.” But not a resignation.

Democrats did not all call for him to resign. Incredibly, 50 percent of Democrats still support Northam. This is down from 70 percent approval in January. He got a free pass from some Democratic politicians. State Del. Lamont Bagby, head of the Virginia Legislative Black Caucus, called him to resign but then qualified it. He would let him “breathe a little bit, give him space to make the right decision.”

At first, Virginia’s two Democratic senators, Mark Warner and Tim Kaine, did not call for his resignation. They hemmed and hawed. They changed their minds after his press conference. Former Virginia Gov. Douglas Wilder, a black man, also changed his mind after the news conference.

More and more Democrats are now calling for him to resign. Hillary Clinton, presidential candidates Kamala Harris and Cory Booker, and Democratic National Committee Chair Tom Perez all want him to leave office. But he won’t.

Virginia laws limits governors to one term, so Northam does not need to worry about running for reelection. Lieutenant Governor Justin Fairfax, who is black, would replace him if he does. But he faces a scandal of his own, accused of sexually assaulting a woman several years ago.

How racist, hypocritical and lying does Northam need to be before he will finally resign? The legislature could try to impeach him, but it would be difficult under the commonwealth’s constitution.

Instead, many on the left still defend him. One-time Democratic vice-presidential candidate Joe Lieberman declared, “One, he says he wasn’t in that picture. Two, I think we ought to fairly ask him, did he know the picture was on his page of the yearbook? And three, he ought to be judged in the context of his whole life.”

The answers? Yes, he was. Yes, he did. And sure — if you start applying the same standard to Republicans.

Democrats Outraged Against Gov. Northam — For Only Half the Right Reasons

Gov. Northam, Step Down and Let the Healing Begin