The Morning Brew: You Can’t Spell ‘Omicron’ Without a C, an O and an N.

Biden to talk about Omicron as Broadway brings the curtain down for the rest of the week. 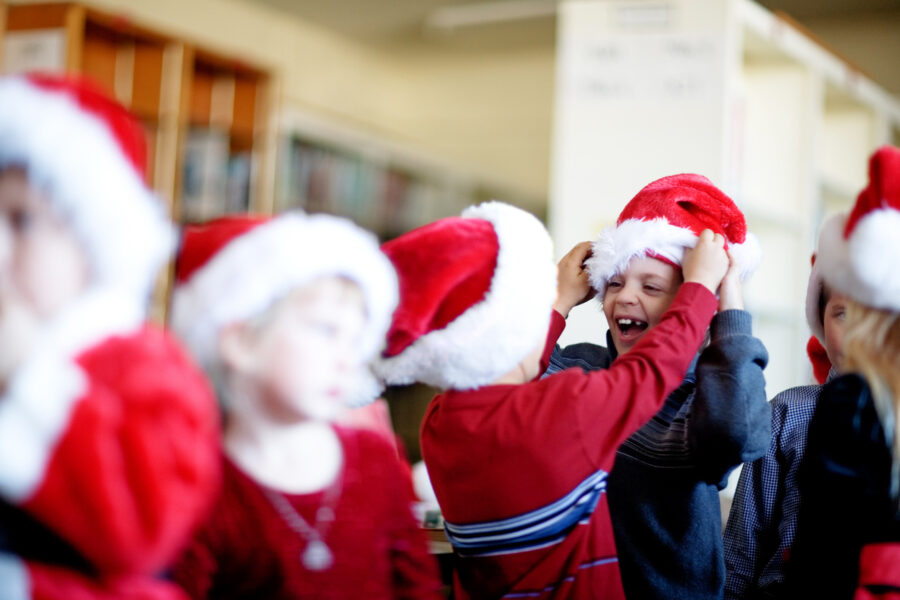 Merry Morning and a Happy Tuesday to you.

Winter officially arrives today, and there’s nothing like a hot Morning Brew to warm you up.

Fool Me Once … Biden and Dem’s Playing Their 2020 Playbook

Joe Biden will be addressing the nation Tuesday about the Omicron variant. This as the CDC announces the mild Omicron variant is now responsible for nearly 75% of COVID-19 cases.

He’ll reportedly issue a “stark warning” to the unvaccinated, declaring how bleak the winter will look. Given the relatively mild symptoms of Omicron, you have to wonder why the sudden doomsday talk from the administration. And Democratic mayors and governors.

Last week, when the White House realized the “Build Back Better” bill was doomed, the White House and Democrats suddenly shifted emphasis to the “voting rights” bill. The bill tries to codify into law the illicit shenanigans that helped put Biden into the Oval Office in the first place. Shenanigans … repeatedly now declared illegal by courts in Wisconsin, Michigan, Virginia and elsewhere … that were put in place using the convenient excuse of COVID.

So color me suspicious when the same people suddenly start yelling and screaming about a new COVID variant at the same time they are pushing for this voting rights bill.

The White House certainly didn’t ease suspicions this is all about politics with its ghoulish post the other day.

The White House has published a statement worthy of Herod. Just substitute the word “vaccinated” for “obedient.” 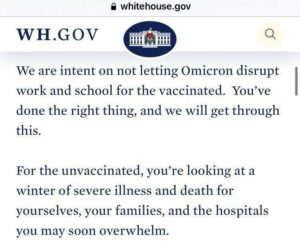 This is not science. This is a demand for submission. (They tried to bully Sen. Joe Manchin. You think they won’t bully you?)

It is also desperation on the part of the man whose central campaign promise was to “shut down the virus.” Something that was never going to be possible.

Maybe that explains why, according to CNN, the administration is switching its messaging “toward focusing on severity instead of case numbers.” As our Executive Editor Jay Richards tweeted, it’s never really been about cases.

IT WAS NEVER ABOUT CASES. First they redefined "case" to mean "positive test," then ramped up testing, and focused on the predictable rise in "cases" (read: positive tests) as if that were the relevant metric. We're living in a global stupidocracy. https://t.co/VkDvjoopiy

Jay is the co-author of The Price of Panic: How the Tyranny of Experts Turned a Pandemic Into a Global Catastrophe. Makes a wonderful Christmas gift. And if you order a copy by noon today, Jay promises to personally take down your Christmas decorations come New Year’s, remove your tree, and babysit your children who had way too much sugar. (Okay, I made that up.)

Broadway Hit Shows Shutting Down The Rest of the Week

Sorry. You’re out of luck if you scraped the money to fly to New York City this week to see Hamilton, Aladdin, Dear Evan Hanson or a slew of other Broadway shows. Or you came to the Big Apple to see the Rockettes. Shows have been cancelled through Christmas. Traditionally one of Broadway’s biggest weeks. Even King Kong didn’t work this hard to destroy a once great city.

The rash of breakthrough COVID cases is being blamed. But notice the announcement from Aladdin.

I have a question: Is anyone in the Aladdin cast actually sick? Testing is finding “breakthrough” cases. Does that mean the performers and crew are asymptomatic? That if they weren’t being tested left and right, the casts would just be enduring a typical cold and flu season? And the show would go on?

What would it take to put this COVID-Panic genie back in a bottle?

The state of Texas on Friday began construction on a border wall, hoping to fill some of the gaps left wide open by the Biden Administration. Tweeted Gov. Greg Abbott, “Texas is stepping up to do the federal government’s job.”

Texas has officially started building its own border wall.

Texas is stepping up to do the federal government’s job. https://t.co/K7CbIPs75p

Salvation Army Having a Tough Slug After Woke Misstep

The Salvation Army is having a rough go this holiday season, facing both a toy donation shortage and drop in red kettle donations.  In Seattle, for example, the shortfall is said to be “dire.” According to Epoch Times, they’ve seen a drop from 100,000 to 3,000 toys.

The why is not hard to figure out. Or at least one major reason. Last month, the Salvation Army was forced to pull an odious document from its website called “Let’s Talk About Racism.” As Fox News reports, the guide instructed Whites and Christians to “evaluate” racist attitudes and practices. “White Culture” had assorted problems it had to address. “White Americans” had to stop ‘trying to be color-blind.” You get the idea. The backlash was fierce, and the reaction predictable.

To paraphrase Donald Trump, “Everything woke turns to reindeer droppings.”

How bad is crime in the Cesspool by the Bay? Residents have taken to leaving the trunks of their cars open to show thieves there’s nothing in the car worth stealing.

I can hear my Jersey relatives now. “You think San Francisco is tough. My neighborhood was so tough we left the trunks of our cars open to show we didn’t have any bodies stashed in there.”

How often does a commercial from a car company make you reach for the Kleenex? Well, Chevrolet has put out a commercial for the holidays guaranteed to put a lump in your throat. It’s called “Holiday Ride,” about the special gift a daughter gives her grieving father. Sure, there’s the short version on TV, but for the full beautiful effect, check out the full version:

Too bad eyes don’t come with wipers. Could use ’em after that.

You may know The Exorcist was inspired by a true story. What was not publicly know until this week was the real name of the 14-year-old demon-possessed boy. Nancy Flory gives us the details.

We finish up our three-part interview with Dr. Michael Brown celebrating his 50 years since receiving Christ. It’s called Continuing to Make the Main Thing the Main Thing.”

Biden Leaves God Out of His National Day of Prayer Proclamation