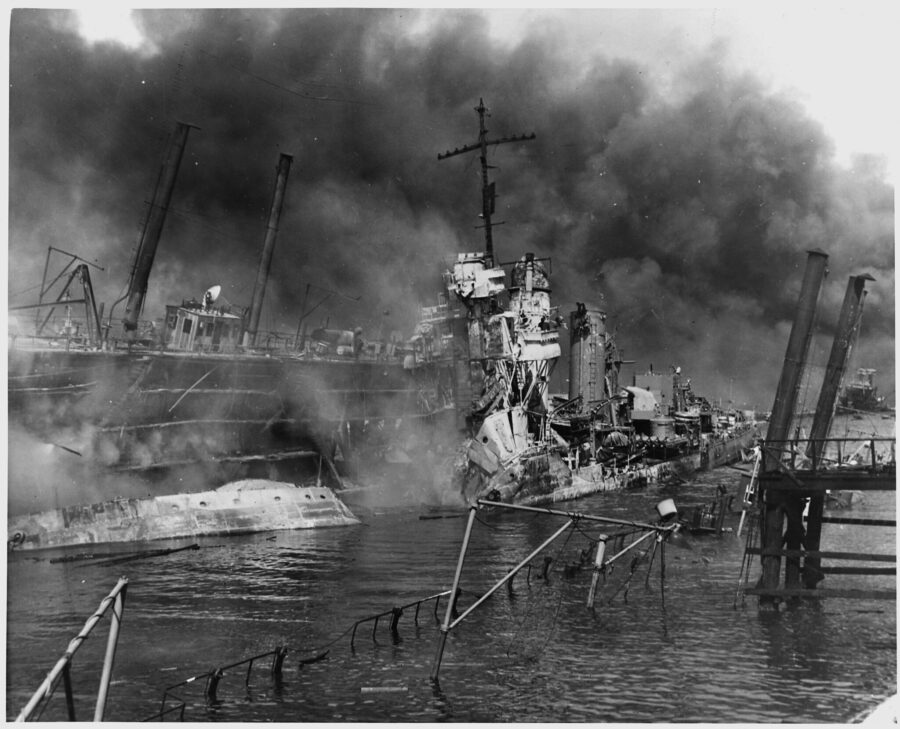 The twisted remains of the destroyer USS SHAW burning in floating drydock at Pearl Harbor after the sneak Japanese attack on Dec. 7, 1941.

It’s December 7th. A day that continues to live in infamy. And a day to remember heroes.

80 years ago today, Japan launched a surprise attack on our naval base at Pearl Harbor in Hawaii. 2,403 Americans were killed. 19 U.S. naval ships were destroyed or damaged, including eight battleships.

The following day, President Franklin Roosevelt described the Pearl Harbor attack as a “date that will live in infamy.” He asked Congress to declare war on Japan. Germany and Italy then declared war on the U.S.

World War II was already in full fury. The warning of Japanese Admiral Isoruko Yamamoto, who had been ordered to attack Pearl Harbor, would prove prophetic: “I fear all we have done is awakened a sleeping giant and fill him with a terrible resolve.”

To help us commemorate the Pearl Harbor anniversary, military author and Stream contributor Tom Sileo has posted a brief history, and the words of Ronald Reagan from his 1987 Pearl Harbor Remembrance Day Proclamation.

The Passing of WWII Hero and Senator Bob Dole

One young man who joined the fight was Bob Dole of Kansas. He enlisted in the Army’s Enlisted Reserve Corp in 1942, rising to become 2nd lieutenant of the 10th Mountain Division. In his military memoir, One Soldier’s Story, Dole recalled, “I thought it was mighty odd that a kid from Kansas who had seen a mountain up close only once in his life would be assigned to lead a platoon of mountain troops.”

The high-explosive bullet shattered his shoulder and a vertebra in his neck. He was not expected to live. But live he did, becoming one of the most respected senators in our nation’s history. And the 1996 Republican nominee for President of the United States.

Senator Robert Dole passed away Monday at the age of 98.

“Bob was an American statesman like few in our history,” wrote his friend and former colleague Joe Biden. “A war hero and among the greatest of the Greatest Generation.“

The man who defeated Dole, President Bill Clinton, tweeted his condolences. “After all he gave in the war, he didn’t have to give more. But he did. His example should inspire people today and for generations to come.”

Bob Dole dedicated his entire life to serving the American people, from his heroism in World War II to the 35 years he spent in Congress. After all he gave in the war, he didn’t have to give more. But he did. His example should inspire people today and for generations to come. pic.twitter.com/8Iiy7ssGkD

Mike Huckabee also shared his personal appreciation and memories of Sen. Dole, relaying how Dole came to campaign for him when he was a “nobody.”

The Last Surviving Member of the Band of Brothers Passes

Retired Army Colonel Edward Shames passed away at the age of 99. Shames was the last surviving member of Easy Company, 506th Parachute Infantry Regiment, 101st Airborne Division, whose exploits were immortalized in the HBO miniseries Band of Brothers.

Edward Shames, the final living member of the Band of Brother, Easy Company, 506th, has left us. He died peacefully at home at 99.

Ed jumped into Normandy, fought in some of WWII's most critical moments, was memorialized on the HBO show. pic.twitter.com/4o57njMJ5k

He jumped into Normandy on D-Day. He fought in the Battle of the Bulge. Shames — who was Jewish — was the first member of the 101st Airborne Division to walk into the Dachau concentration camp. When Germany surrendered, Easy Company went into Hitler’s “Eagle’s Nest.” There Shames stole several bottles of cognac marked “for the Fuhrer’s use only.”

He would later use some of that cognac to toast his son’s Bar Mitzvah.

Only a few score WWII vets are able to make the journey back to Pearl Harbor for the 80th anniversary. One is 101-year-old Ira “Ike” Schab.

Shore leave in Shanghai. Perhaps 1945? When he was stationed on the USS Helena. Pop is the one making a goofy face in back. Shocking. I wonder about all these folks and whether any are still with us. #Ike2Pearl80th #Ike101 pic.twitter.com/FgyGUJi1ht

Ike was a 21-year-old Navy musician stationed aboard the destroyer USS Dublin when Japanese bombs began raining down that Sunday morning.

“It’s hard what to say the feeling that runs through your mind. You’re scared. You don’t know what’s going to happen next,” Schab told Hawaii News Now. “When I realized we were under attack I got busy doing what I was told, passing ammunition and getting that sort of stuff done.”

He would also spend that horrific Sunday morning helping pull bodies out of the water.

Schab is making the return to Pearl Harbor, thanks to the help of a crowd-funding effort.

Our wonderful crew for @HawaiianAir – I will take pictures later of the beautiful lei that one of the crew made for pop. They are lovely humans. #Ike2Pearl80th #Ike101 pic.twitter.com/SnzEq7JIqc

Thank you, Ike Schab, for your service and sacrifice.

And to the 2,403 who gave the full measure of their devotion on December 7, 1941, we will remain ever grateful and will never, ever forget.

Mark Judge offers an amazing take on Alec Baldwin, called “Alec Baldwin Should Have Become a Conservative. It Would Have Saved His Life”. (Keeping with our theme today, Baldwin co-starred in the Michael Bay film Pearl Harbor. He played Lt. Col. Jimmy Doolittle.)

And who is the “most annoying political columnist in America”? Stream contributor Peter Wolfgang shares his nominee.

Plus, just up, in a Stream exclusive, Dr. Michael Brown answers the question “Is It True That the Book of Revelation Indicts Big Pharma?”