Meanwhile, Trump's dancing to a new tune that hints of his 2024 plans. 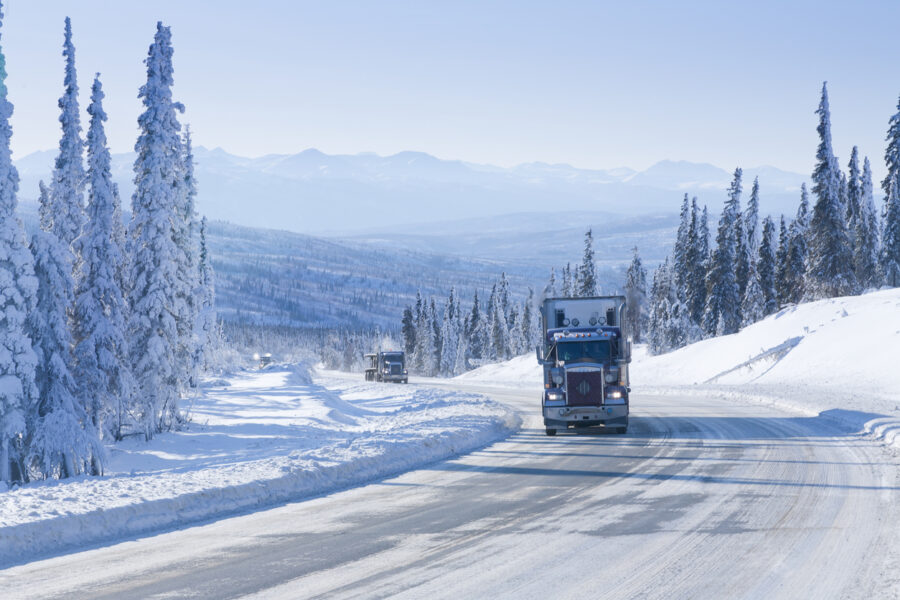 January 2022 is ending with the sound of diesel trucks and freedom, and a week of big doings.

The massive convoy of Canadian truckers protesting that nation’s vaccine mandates reached the capital of Ottawa over the weekend. 45 miles long and an estimated 50,000 truckers strong.

Sometimes it’s best for me to shut up and let the images do the talking.

This is the scene in Ottawa as the Trucker Freedom Convoy makes their arrival.

So much for “small fringe minority”. pic.twitter.com/uHe5KRBEaX

And where is Canada’s Prime Minister Justin Trudeau? Hiding off in isolation over “security concerns.” Originally, they said Trudeau was being isolated after being exposed to COVID.

The trucker movement is coming to America. A group called “Convoy to DC 2022” is planning a protest that’ll travel from California to the Nation’s Capital. Dates to be announced. Other trucker convoys are popping up in Australia and elsewhere.

The question of the hour: Can a bunch of blue collar workers stand up and overcome repressive socialist regimes? Does the name Lech Walesa ring any bells? The #Solidarity movement?

Donald Trump is dropping more signs than a third base coach covered in itching powder. Fresh off declaring himself the 45th and 47th president while golfing, Trump offered a fresh hint he’s running in 2024 at his massive Saturday night rally in Conroe, Texas.

No, it wasn’t anything he said in his speech, beyond declaring “we” would take over the House, the Senate and in 2024 the White House. It was his choice of closing music. He’s put aside “YMCA.” On Saturday night, Trump did his quirky meme-friendly dance to the Sam & Dave classic “Hold On, I’m Coming.”

Trump also declared he could pardon unfairly treated January 6 protesters if he returns to the White House.

“If I win, we will treat those people from Jan. 6 fairly,” Trump declared. “We will treat them fairly. And if it requires pardons, we will give them pardons. Because they are being treated so unfairly.”

Expect CNN’s Jim Acosta to hyperventilate about Trump freeing “violent insurrectionists” on his dismal new prime time show Democracy in Peril. Funny how desperately Acosta needs Trump. He should rename the show “I Can’t Quit You.”

While Trump drew politicians from all over the country for his Texas rally, Joe Biden once again got snubbed by top politicians during a trip to Pennsylvania. Both state Lt. Gov. John Fetterman and state attorney general Josh Shapiro claimed “scheduling conflicts” kept them from joining Biden at his infrastructure event. What else do those two have in common? Both are running for higher office.

This comes just weeks after Stacy Abrams avoided Biden during his trip to Georgia to tout voting rights. Getting so you’re more likely to see Neil Young and Joe Rogan playing Yahtzee together than Democrats in tight races with Joe Biden.

While people may be avoiding Joe en mass, at least he’s got a new kitty cat named Willow to keep him company.

Unfortunately, he’s also got North Korea test-firing its most powerful missile since 2017. Kim Jong-Un is also threatening to conduct long range and nuclear tests as well.

You almost have to feel sorry for the poor saps and feckless corporations that poured money into the Black Lives Matter organization. They would have been better off sending money to “Nigerian princes.”

The last proof of the grift? BLM transferred millions of dollars to a Canadian charity run by the wife of BLM co-founder Patrisse Khan-Cullors. Why? To help battle the clear racial oppression running rampant north of the border? No, of course not.

The millions went to purchase a mansion belonging to the Communist Party of Canada. This according to the New York Post. Khan-Cullors stepped down from the organization after the avowed Marxist spent $3.2 million in BLM funds for homes in L.A. and Georgia.

No. All Rogan’s done is questioning the Fauci dogma when it comes to COVID-19. Sharing his own personal conquering of COVID. Holding three-hour conversations about COVID with medical experts. Having his own opinions.

Among the artists who’ve pulled their music: Joni Mitchell, Barry Manilow and guitarist Niles Lofgren of E Street Band fame. Poor Joni is no longer able to look at “Both Sides Now.” Disagree and she wants you gone. But such is the way of Fauci worship and the newly identified “Rogan Derangement Syndrome.”

Young and Mitchell aren’t the only American icons whose legacy is being trampled by wokeness.

Hear the expression “Everything Woke Turns to Bleep”? That now includes the Man of Steel. Last summer, DC Comics introduced “Superman: Son of Kal-El.” The Superman mantle was handed over to the son of Clark Kent and Lois Lane. This new Superman, Jonathan Kent, is a climate activist, supporter of illegal immigration, and — of course — dating a male reporter.

Sales plummeted faster than a speeding bullet. When released in July, “Superman: Son of Kal-El” sold only a paltry 68,800 copies. That made it only the 17th best-selling comic of the month, according to industry resources website Comichron. And after only five issues, the series has dropped out of the top 50 Comic Books, says John F. Trent of Bounding Into Comics.

“That’s right, the flagship Superman book at DC Comics is not on a Top 50 Comic Books by Units chart only 5 issues in,” Trent wrote.

The Cincinnati Bengals and Los Angeles Rams are going to the Super Bowl LVI. Well, the Rams won’t be going too far, the game is in Los Angeles. The Bengals rallied to knock off the Chiefs in overtime 27-24. The Rams came back to beat rival San Francisco 49ers 20-17. After last week’s games nobody had grown enough nails back for the games to be nail-biters. So we have to call them “tips-of-our-fingers biters.”

The early line has the Rams, playing on their home turf, favored by 3 1/2 points.

And coming up at 9 a.m., Dr. Michael Brown on Rafael Nadal’s amazing, inspirational comeback at the Australian Open, “It’s Not Over Til It’s Over.”