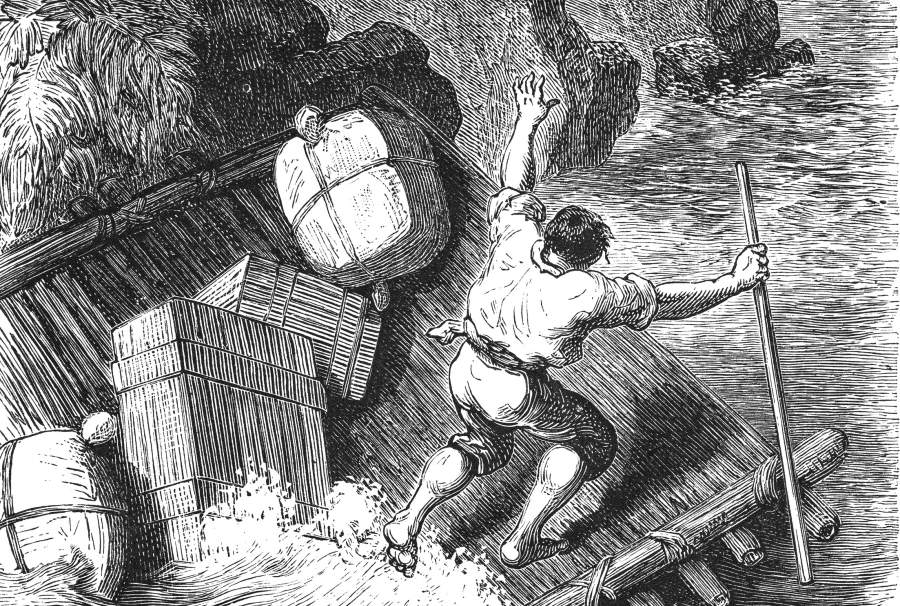 The ingredients included bubblegum-flavored yoghurt, leeks, boxed mac and cheese, and mackerel. Something that weird, anyway. The tvs nearest our table at the diner were set to a show called Chopped. Chefs were given a bizarre set of ingredients from which to make something good. And they did.

You know what we are all, sheltered in place? We’re chefs on Chopped.

And that gives us the chance to learn something many of us already know, but mostly only in theory. Being stuck inside by itself isn’t. Especially if you’ve lost your job or someone you love. For many people, there’s no way to make this better.

But for the rest of us, being forced inside should make us see how much we have. It tells us to thank God for a lot more things than we usually thank Him for. But we have to look. That’s a huge lesson. It can change your life. It did mine (slowly, over time, and not without resistance, because I like to whine and complain as much as anyone).

The great Christian writer G. K. Chesterton wrote about this in his novel Manalive, published over a century ago. It’s a story about forcing yourself to see things again so you see them afresh. The main character starts his adventures by firing his gun at his old professor, jumping out the window, and running away. And perfectly reasonably, too, as you find out at the end.

Early in the book, the hero explains his way of seeing the world to a young woman who thinks he’s entirely too dreamy and romantic. “When you’re really shipwrecked,” says Innocent Smith, “you do really find what you want. When you’re really on a desert island, you never find it a desert.”

He then says this, which is more clearly relevant to us: “If we were really besieged in this garden, we’d find a hundred English birds and English berries that we never knew were here. If we were snowed up in this room, we’d be the better for reading scores of books in that bookcase that we don’t even know are there; we’d have talks with each other, good, terrible talks, that we shall go to the grave without guessing; we’d find materials for everything — christening, marriage, or funeral.”

This, Chesterton explained, is why the book Robinson Crusoe appeals so much. (Or did, back when people other than homeschoolers read it.) The book “celebrates the poetry of limits, nay, even the wild romance of prudence,” he says in his book Orthodoxy.

Crusoe survived a shipwreck by himself. Left on a deserted island, he has to get what he can from the ship before it sinks. There, Chesterton says, is the greatest pleasure of the story. “The best thing in the book is simply the list of things saved from the wreck. The greatest of poems is an inventory. Every kitchen tool becomes ideal because Crusoe might have dropped it in the sea.”

How does this apply to our lives? “It is a good exercise, in empty or ugly hours of the day, to look at anything, the coal-scuttle or the book-case, and think how happy one could be to have brought it out of the sinking ship on to the solitary island.”

We tend to look at the things we have and think about the things we don’t have. You have a pile of books you can read, but you don’t have the book you want to read now, and the library’s closed and Amazon’s backed up and the ebook’s way too expensive. “I don’t have anything to read,” you complain.

But how amazing is it that you have all those books you can read? In your house? Three steps away? What if you were poor Crusoe who might well never see another book for the rest of his life? How precious those books would be.

Think of how you’d feel when, having stocked up on cans and cans of food, you find you don’t have a can opener. You find an old rusty one at the back of a drawer. Watching the can open as you turn the crank would feel like magic. You’d thank God for it in a way you rarely thank God for anything.

That’s the thing to practice when you’re stuck inside. We have so much. We just need to see it. “When it comes to life, the critical thing is whether you take things for granted or take them with gratitude,” Chesterton said.

For David’s guide to reading Chesterton, go here, and his explanation of why Chesterton was such a genius, go here. He’s written a lot on gratitude. Including this article, “Thank God For Life, Even When It Feels Like a Gift You Didn’t Want,” and this one from The Stream, “Thank God for the Things You Never Think About. Like Your Toes and Indoor Plumbing.”

What’s It Like Stuck at Home? Stream Editors Dish