The Left’s Craziness is Backfiring and Helping Trump

As long as the left keeps it up, Trump will easily sail to reelection in 2020. 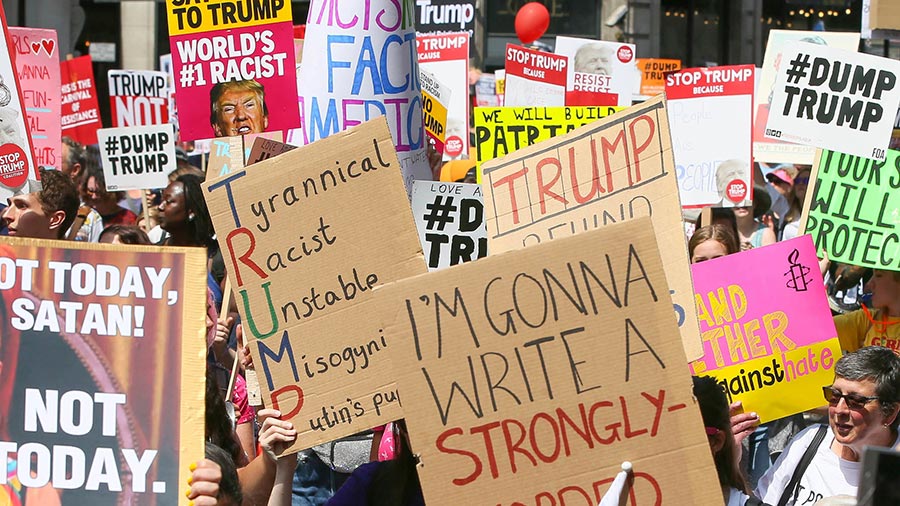 Ever since Donald Trump became president, the left has acted as if the world is falling apart. But the overreaction isn’t convincing people. Trump’s approval rating has gone up 6 percent since the beginning of 2018. It is at the highest level since he took office.

The truth is, Trump really isn’t much different than previous Republican presidents. His base of support is similar to that of Ronald Reagan. He’s not a totalitarian, he’s not a Nazi. The left, including reporters and TV commentators, compares the practice of separating the children of illegal immigrants from their parents temporarily at the border with the tactics of the Nazi regime. One MSNBC commentator went so far as to label Trump supporters Nazis.

In a classic early Hitler move Trump will have a military parade & try to embolden his crazed followers.

But Trump’s daughter Ivanka converted to Judaism and married a Jew. Trump has a warm relationship with Israeli Prime Minister Benjamin Netanyahu — better than Barack Obama’s relationship with him. He moved the U.S. Embassy to Jerusalem. Considering almost half the population voted for Trump, they can’t all be Nazis.

Considering almost half the population voted for Trump, they can’t all be Nazis.

In reality, Trump has hired plenty of minorities in his administration. Dr. Ben Carson, secretary of Housing and Urban Development, is a black cabinet member. Transportation Secretary Elaine Chao is an Asian-American member of the cabinet. There are at least three Indian-American high-ranking appointees. Labor Secretary Alex Acosta is Cuban.

Ramping up the Rhetoric

As the left observes their rhetoric is not working, instead of trying a new tactic, they ramp up the rhetoric. Numerous headlines scream that Trump has “gone too far.” Numerous prominent Democrats are calling to impeach him. The phrase “Trump Derangement Syndrome” has been coined to describe the behavior.

The left cries foul at every little thing Trump does. He can’t do anything right. If he attempts to have cordial relations with Russian President Vladimir Putin or North Korea’s Kim Jong Un, he’s attacked as cozying up to tyrannical dictators. On the other hand, if he talks tough toward them, he’s criticized as reckless.

It’s become so bad that the phrase “Trump Derangement Syndrome” has been coined to describe the behavior.

Counselors are offering therapy for those upset about Trump. Articles helpfully offer tips for dealing with Trump-supporting relatives during the holidays. But this just looks silly.

The arrogance and strident attitudes of Trump’s critics turns people off. People without college degrees supported Trump far more than Hillary Clinton. They see the smug critics as out of touch, wealthy elitists. Late night comedy has turned into hate speech against Trump, causing it to lose viewers.

The more people attack Trump, the more people rally to defend him. It insults people to hear political commentators say with a straight face that Trump is Hitler.

While there are some things Trump does that are worthy of criticism, such as some of his off the cuff remarks and tweets, they get buried due to all the other criticism. If the left would just focus on Trump’s careless talk, they would have more effect dissuading his supporters.

Over 90 percent of the mainstream news coverage of Trump is negative. People see the unfairness and it makes them sympathetic toward Trump.

Immigration is the most important issue to many Americans currently. A CBS poll found that 51 percent favor a border wall between the U.S. and Mexico. Yet media coverage focuses on the plight of those affected by border enforcement. There is little positive coverage of law enforcement or portraits of those harmed by illegal immigration. Viewers see this skewed portrayal of the issue and tune out much of the media.

The vicious hatred from the left has helped contribute to the launch of the #WalkAway movement, disillusioned Democrats who are deserting the party because it has become too radical. The movement says on its Facebook page, “The left has been allowed for so long to reinforce the narrative that everybody on the right is a bigot, a racist, a homophobe, a misogynist, etc. But the left has become so extreme, it’s now time to fight back.”

Americans don’t like hearing that they, their relatives and friends are horrible people. The extremist rhetoric is having the opposite of its intended effect. As long as the left keeps it up, Trump will easily sail to reelection in 2020.