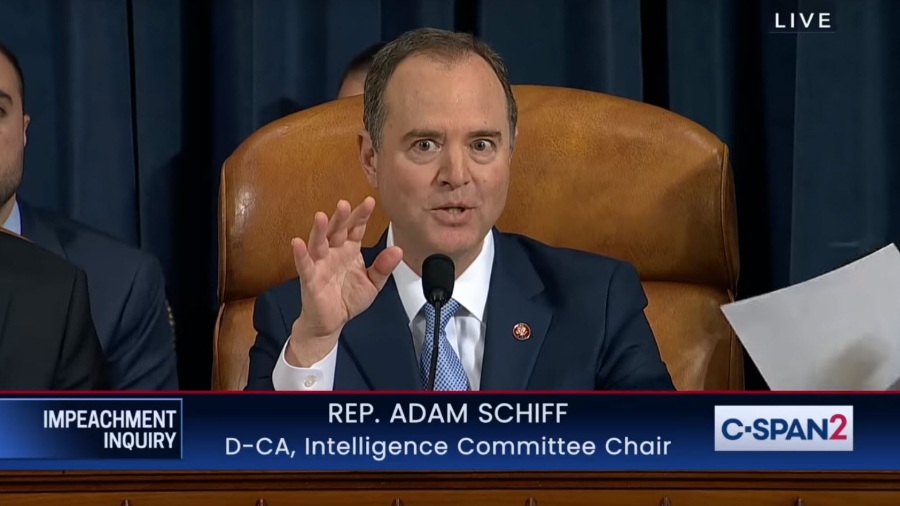 Ready for another Schiffy week? I know, it’s a thoroughly distasteful mess, something most appropriate for viewing on the bottom of a bird cage. But after a week of witnesses who didn’t have a clue about Trump’s rationale in Ukraine, disagreed with his policies, thought they knew better, wanted to run things and could offer only hearsay “evidence,” we’re now supposedly going to hear from some witnesses with “firsthand knowledge.” And, you know what? I think it actually might get pretty good, especially if you like watching train wrecks in slow motion.

To set this up, recall that former U.S. Ambassador to Ukraine William Taylor, in his written statement last week, told the story about the member of his staff who, on July 26 — the day after the “problematic” Trump/Zelensky phone call — sat on a patio having lunch with Ambassador Sondland and two other people and overheard his conversation with President Trump. The staffer said he could hear Trump’s side of the conversation quite clearly, as the President was speaking so loudly that Sondland had to hold the phone away from his ear. Trump asked Sondland if the Ukrainians were ready to move forward with “the investigations,” and Sondland said they were.

In his statement, Taylor said the staff member told him (Taylor) that Sondham had told him (the staffer — see how convoluted this game of “gossip” is?) that President Trump cared more about the investigation of the Bidens than he did about Ukraine, and that Giuliani had been pressing for that. (Are we up to triple hearsay now?) Taylor explained that he was submitting this statement later, as a supplement, “for completeness,” to his original deposition given on October 22, saying that at that time, he didn’t know about this phone call.

Are we up to triple hearsay now?

When Taylor gave this statement last Wednesday, the media went crazy over their new “bombshell.” Taylor didn’t identify the staffer who “overheard” the call, but “a source familiar with the matter told NBC News that it is David Holmes, the State Department official just added to the calendar to testify in closed session Friday.”

That was Wednesday. At this writing, his closed-door session has been held, and Holmes’ opening statement has been leaked. Here are a couple of paragraphs from Holmes’ statement that zero in on the call itself:

As for “the investigations,” it’s easy to understand why Trump (and his attorney) wanted not only to uncover corruption but, specifically, to know what happened with Ukraine during the 2016 campaign. If you’ve been reading Lee Smith’s outstanding new book, The Plot Against the President, you know that super-slimy Fusion GPS was working with Ukrainian sources to find anything they could on Trump and/or his associates, such as campaign director Paul Manafort. (We’ve seen how that case played out with Andrew Weissmann leading the special counsel). Also, when Trump was a candidate, the Ukrainian ambassador in Washington, DC, publicly trashed his campaign, a stunning thing for a diplomat to do. This is the tip of the iceberg. Trump had every reason to suspect interference and outright sabotage.

Anyway, Holmes’ statement goes on. Here’s a link to the entire statement. But there are huge problems with this statement. Star with his timeline, which has at least one significant mistake. He used Trump’s attendance at a G20 meeting that also included Putin to support his belief that Trump lacked support for Ukraine — quite a bit of editorializing going on there — but gave the date as July 28. The G20 was a full month earlier, before the quid pro quo was even an issue. Just the opposite. On April 16, Trump had had his first congratulatory call to Zelensky, promising him that “we’re with you all the way” and personally inviting him to the White House.

Not just that — there’s more in this story that defies common sense. For one thing, if these jokers are sitting on a public patio in Ukraine able to overhear the President on a phone call, that call is non-secure in an extremely dicey foreign country. Can you say “jail”? Who do they think they are, Hillary Clinton?

The President is required by law — you know, law, passed by Congress — to look into corruption, and the efforts being undertaken to clean it up, before sending the big bucks to another nation.

The truth is, these diplomats and staffers stationed in Ukraine disagreed with Trump over how to deal with that country. You and I knew when we elected him that Trump wasn’t eager to send billions of dollars to other countries unless he had determined that it made sense to do so, that there was some benefit to America. The President was simply being consistent. Besides that, he’s required by law — you know, law, passed by Congress — to look into corruption, and the efforts being undertaken to clean it up, before sending the big bucks to another nation. The diplomatic corps apparently felt that Trump should support Ukraine in every way, no matter what, and probably saw any hesitation to do anything less as a betrayal.

It’s easy to imagine these four members of the diplomatic corps sitting around a table on a restaurant patio on a pleasant summer day in Ukraine, listening to the President of the United States on the other end of the phone like big shots and then taking the opportunity to badmouth The Boss. Saying that Trump doesn’t “give a sh*t about Ukraine” sounds just like something these frustrated employees (Democrats, I understand) might say after a glass or two of wine. I really wouldn’t count such hyperbole as sworn testimony, though I’m sure Jake Tapper would.

Also, for a great overview of where we are now in all this — refreshingly calm and rational — watch the entire Sunday edition of Life, Liberty and Levin, featuring Intel Committee ranking member Devin Nunes.

‘Impeachment’ Then and Now: Hillary’s Overreach Now Typical for Dems